Biologists in Bengal have documented kidnapping for slavery among tropical ants that they say use the same tricks of the trade and face similar risks as humans engaging in "thievery". 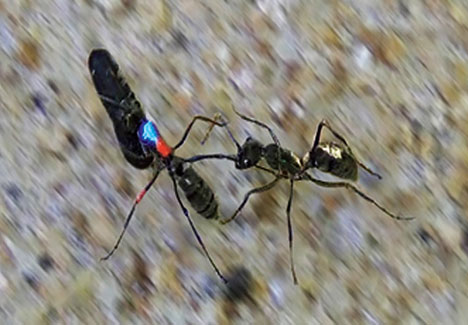 New Delhi: Biologists in Bengal have documented kidnapping for slavery among tropical ants that they say use the same tricks of the trade and face similar risks as humans engaging in "thievery".

The team of researchers at the Indian Institute of Science Education and Research (IISER), Calcutta, observed ants stealing pupae from colonies other than their own and turning them into slaves - in experimental laboratory colonies and in natural wild colonies.

The thieves wait for opportunities, striking primarily when colonies are relocating their nests and least likely to be on guard, then pick up pupae that are left unguarded and avoid encounters with other ants in the colonies they have raided.

"It's amazing - these are the same strategies we would see among human thieves," said Annagiri, associate professor of biological sciences at the IISER. "Ants predate humans on Earth by more than 150 million years, still they share some tricks of thievery."

Their observations, published in the journal PLOS One, suggest that thieves also face danger in the colonies they raid.

Ants from different colonies have distinct smells and the insects use their antennae to detect the outsiders.

Their study found that victim colonies are able to block the majority of theft attempts - only 36 per cent of kidnapping bids were successful. The ants react violently to the raiders - they chase, immobilise and bite raiders and use antennae to box them.

Brood theft allows ant colonies to reduce their own efforts in rearing young and gives them pupae that serve as ready-to-use slaves. But only thieves that move fast, stay furtive and pick unguarded brood are likely to be successful, the study found.

"We first noticed brood theft in laboratory colonies, then confirmed them in the wild," Annagiri said.

On an average, thieving colonies were able to add about 28 per cent more pupae into their colonies. The increase in the number of pupae translates into more future workers without any additional investment in reproduction and rearing of the young.

However, the thieves as well as victims devise methods to ensure their own success.

Ants that were successful in stealing pupae displayed key differences in behaviour compared to unsuccessful thieves, the research suggests. Successful thieves reduced their chances of detection by staying for shorter periods inside victim colonies and picked up unattended pupae that were not held in the mandibles of ants but were on the floors of the nests.

The IISER team is now trying to understand specific mechanisms through which successful pupae thieves avoid aggression in victim colonies.