The Sabar community, the centrepiece of Mahasweta Devi's work, is not very well. 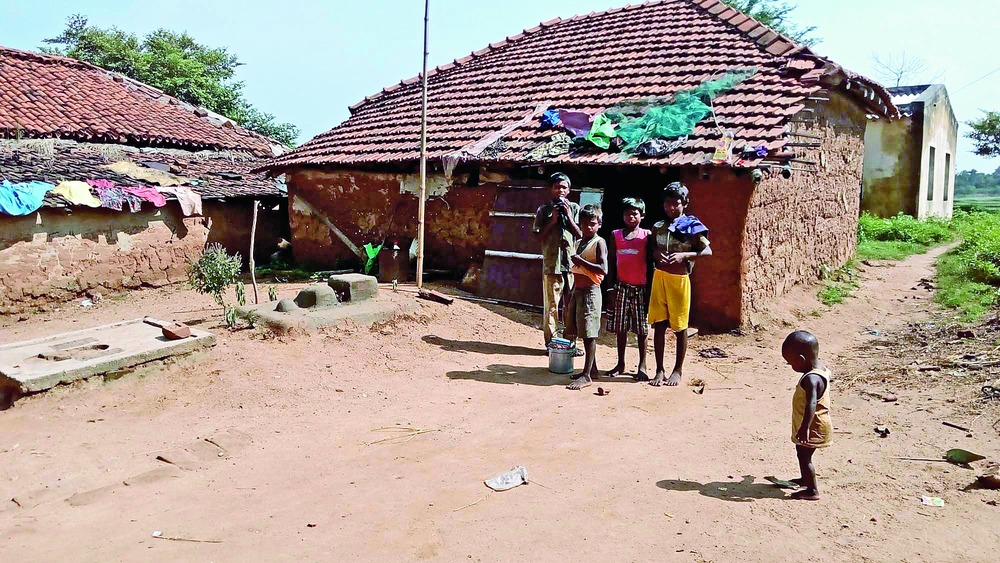 Purulia, Oct. 21: The Sabar community, the centrepiece of Mahasweta Devi's work, is not very well.

The Sabars were never very well, the reason why Mahasweta Devi, the writer-activist who won the Magsaysay Award, stepped into their lives.

British law had declared the Sabars a "criminal" tribe in 1872 and they had been "decriminalised" in independent India, but when Mahasweta Devi came in, they were still regarded as criminals, being arrested and tortured indiscriminately by police with a little help from other communities.

Mahasweta Devi fought on behalf of the Sabars, questioning their "criminality", trying to lift them from utter poverty and alienation. They called her mother. At the Sabar Mela in Purulia in 1983, she was anointed "Sabarer Ma".

She brought them hope - and livelihood. She began to market and sell their handicrafts.

But it was short-lived. Her presence was withdrawn from their lives from the time she fell ill five or six years ago, and finally with her death this year on July 28.

The Sabars are not picked up for every crime in the neighbourhood any more. But otherwise they are back to where Mahasweta Devi found them: utter poverty and alienation, nursing only a few habits picked up from their recent encounter with the world.

Twenty years ago, a Sabar did not know tea. "We saw people in nearby villages," says Sarat, in his late 50s, who makes his living by collecting wood from the forest. "We can't afford sugar and wanting milk is pointless. We boil water with some tea and salt. It is our tea," says Kajali. Finding work is more difficult than finding milk.

Says Mahadeb Sabar, a 60-year-old man who folded his hands in respect at the mention of Mahasweta Devi: "When Ma came to us, we could earn about Rs 1,500 a week by selling our handicrafts. Now it is hard to earn Rs 400 a week from selling these."

In the absence of the projects Mahasweta Devi brought them, many Sabars are turning back to selling wood. This is not easy, as cutting trees is illegal without replantation, and Sabars are facing resistance from forest officials.

In Bangthupi Sabar Tola, another Sabar village, Meghnad Sabar, a youth who passed Madhyamik in 2008, then stopped his education, became a labourer and married at 18.

"Two months in monsoon we work as farm labourers as all fields here are single-crop. The rest of the months we cut trees and sell in the markets in Kenda or Puncha blocks in Purulia. My daily income is about Rs 60," says Meghnad.

"We only eat once during the day," he says. The one proper meal they have is "just phenabhat (starch rice) with salt", he adds.

Meghnad has a television set and a mobile phone, but neither works because he does not have the money to repair them.

Mahasweta Devi, who had been visiting Jharkhand's Palamau tribal areas since the sixties, was introduced to the Sabars in the eighties by activist Gopi Ballabh Singh Deo, or "Gopibabu", a retired schoolteacher.

Gopibabu, 82, who lives in Rajnowagarh village in Purulia, had already been working for the uplift of the Sabars for two decades. He founded the Paschim Banga Kheriya Sabar Kalyan Samiti in 1968.

The Sabars were "decriminalised" in 1952, but only in name. The police would allegedly conduct raids and torture them for every crime in their area. " Ghorey ghumai murdhumsa, Chorey kate dhan. Jodi kaukey na pali to kheriya dhorey aan (The fat landlord sleeps and thieves cut off paddy from land. If no one can be caught, go catch a Sabar)," the Sabars would say.

The complaint that Sabars don't fit in persists, making it difficult for them to find work and even get state scheme benefits.

Gopibabu is unable to speak because of his ill health. Prashanta Rakshit, the current director of the Paschim Banga Kheriya Sabar Kalyan Samiti, which has its head office in Rajnowagarh, says Gopibabu had acted as a shield for the tribe from the police, running from one place to another to protect the Sabars from the law-enforcers' torture. "He is the pioneer of the movement for the Sabar tribe," says Rakshit.

The 1983 Sabar Mela had been organised to bring together members of the tribe people on one platform so that they could fight together for their rights. Mahasweta Devi, who had already written Aranyer Adhikar (The rights of a forest), her novel on the tragic, brilliant life of Santhal leader Birsa Munda, was with them.

Later she would write Byadhkanda (The book of the hunter), a historical novel about Kalketu, the founder of the Sabar tribe. It is a passionate appeal to preserve the Sabar world.

"It is not that the tragedy of our life ended as soon as our mother Mahasweta Devi promised to be with us," says Jaladhar Sabar, secretary of the Kheriya Sabar Samiti. As the tragedy of Chuni Kotal would prove soon. The first woman graduate among the Lodha Sabars, Chuni, who graduated in 1985, could not bear her harassment in the workplace, a cell made for the welfare of Sabars. She committed suicide in 1992. Mahasweta Devi had reported the incident to the police.

"But it was the beginning of a movement. Most important, we learnt to fight the police and the government," Jaladhar Sabar says.

The custodial death of Budhon Soren in 1998 was another flashpoint. Budhon, from Akarhbaid village, was believed to have been beaten to death in police custody, but his death was shown as suicide. After the post-mortem, the Sabars kept his body at his home for further autopsy, tricking the police by burning a false pier. Mahasweta Devi filed a writ petition in Calcutta High Court and a CBI probe was ordered. The case is still being heard.

Mahasweta Devi marketed the Sabar handicrafts made traditionally with Kashi Ghas, leaves of date-palm trees and bamboo as far as she could in original ways.

"We began training camps. Within two years the Sabars, mainly women, started to make money. We used to buy handicrafts directly and our organisation sold it at different shops and fairs in Calcutta and Delhi," says Rakshit, who travelled with Mahasweta Devi to various countries.

"Didi (Mahasweta Devi) used to keep the handicrafts in her Calcutta home. She would tell visitors: 'I will give you an autograph if you buy one handicraft made by my Sabar daughters'," Rakshit adds.

Not that targeting Sabars ended following Mahasweta Devi's efforts. In 2003, Bhadra Sabar of Tilabani village under Boro police station was killed when villagers allegedly threw stones at him on charges of theft.

The police and officials feel that a section of Sabar men were involved mainly in road robbery till one or two years ago.

But as Jaladhar Sabar points out: "The torture by the police has gone down. We will continue our fight to bring proper financial and social development to our people."

That is the big challenge. The Samiti gives legal help and still conducts training for Sabar people to make handicrafts and market these. But it is not enough.

It is also clear that Mahasweta Devi's work model was not sustainable.

Some other personalities who promised help have disappointed the Sabars. The Samiti members said that in the nineties, five schools opened in Sabar villages, but have closed down recently because of lack of funding. The villagers in Bangthupi and Akarhbaid said no teacher was willing to teach their children as no one can pay.

Individuals and organisations who visited the Sabar villages because of Mahasweta Devi have left.

Desperate, many Sabars "upgraded" their traditional practices into lucrative ones.

Earlier the Sabars would make liquor from Mahua, but now they are using molasses and yeast to brew alcohol and sell it.

In Bangthupi, a Class VI student was found making hooch in his house. This business makes his family more prosperous than others in the village.

"My left leg was cut off as it was burnt in an accident. I had no option other than selling hooch. I earn Rs 400 in three days," says Anil Sabar, the father of the Class VI student.

Other Sabars are going the contemporary way: migrating.

Sabar women have begun to go to Purulia to work as maids and a large number of young men are migrating to Gujarat, Mumbai or Bangalore to work as construction labourers.

Kalyani Sabar from Balakdih village, who received handicrafts training for Mahasweta Devi's projects, has started working as a maid. She is happy.

Kalyani is proud that she could spend Rs 4,000 on the last rites of her father and treat all villagers to lunch, comprising fish, chicken, vegetable curry and plenty of rice with aloo posto and chutney.

"I could afford the money only because I started work as a maid. I earn Rs 4,000 easily a month. My son Motilal works as a labourer in Purulia town," she says.

At least 1,000 Sabar youths, mostly school dropouts, go to other states every year to work as construction labourers and return home with at least Rs 15,000 every four months or so.

The Mahatma Gandhi National Rural Employment Guarantee Act (MGNREGA) has not been much of a help. Few job cards have been updated since 2008.

"I don't know how to get work under the scheme. No one calls us," says Uttor Sabar, 40.

A district official from Purulia says the Sabar people had not been brought under the government project successfully because of their "culture". The Sabars, hunters and wood-gatheres, do not enjoy the kind of work possible under such a scheme, he adds.

Same with government institutions. Sabars do not fit in. "We have provided concrete houses to them under government schemes. Many of them are not concerned about bank accounts or documents, which we provided by going to their villages. We are trying to connect them with the mainstream with Aadhaar card facilities," says Ajay Sengupta, the block development officer of Puncha.