Traffic and damaged road, worry for villagers in Durgapur 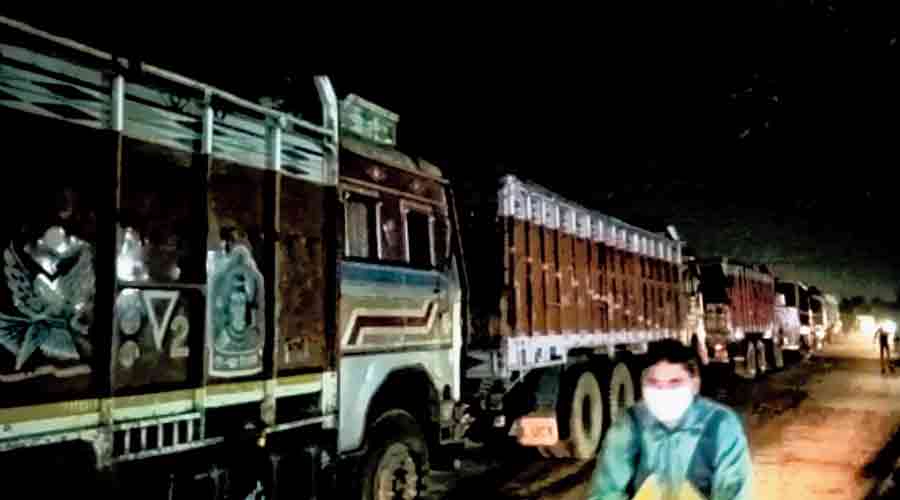 A group of villagers blocked the Durgapur-Pandaveswar Road for over an hour in West Burdwan’s Laudoha on Wednesday evening, to protest “rampant” plying of trucks carrying sand lifted from the Ajay river causing traffic bottleneck and damage to the road connecting their village.

“Several vehicles, including ambulances, remain stuck in the jam for hours. Police does not even bother to pay attention to our allegations,” said Rajesh Nath, a protester at Sarpi village.

The protesters alleged that as many as 60 sand-laden trucks ply on the narrow road every day.

Achintya Mandal, another protester, alleged that the road was developing craters because of the rampant plying of “overloaded” trucks.

“Sand smuggling was stopped in this region after chief minister Mamata Banerjee intervened and asked the police to crack down. But recently, the smugglers have regrouped and resumed work,” said a source.

In Bankura, several sand traders alleged that a syndicate involved in sand transportation is forcing them to purchase coupons, popularly known as “pads”, at a cost

“We are lifting sand from the permitted areas of the river. Why should we purchase coupons when we have proper challans,” said a sand trader in Bankura.

The Bengal government has recently changed its policy for sand mining and has decided to install a centralised system for the auction of sand quarries after complaints came up that political leaders were controlling the auction system and hurting the state’s interests.

As per the new system, the auction of sand quarries will be done by the West Bengal Mineral Development and Trading Corporation instead of district magistrates.