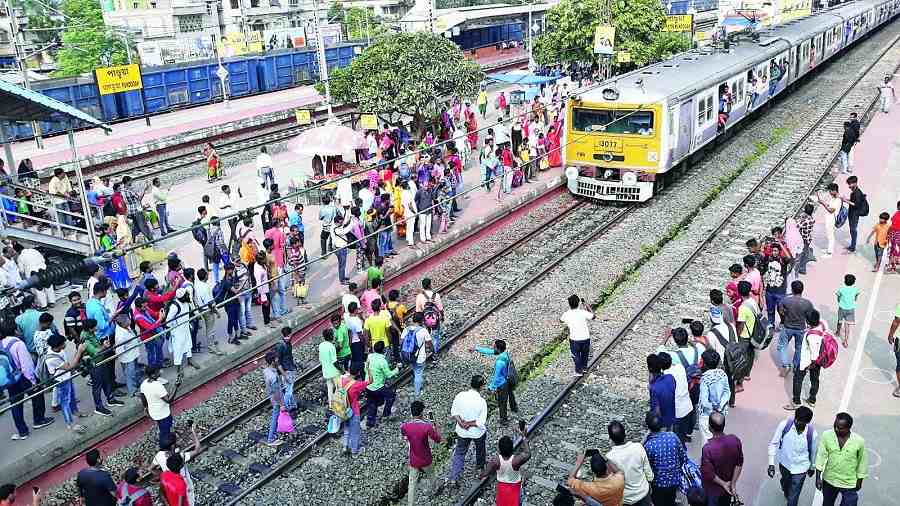 Hundreds of passengers on Monday blocked railway tracks at four stations in Hooghly district for over three hours to protest against irregular local train services in the Howrah-Burdwan section of Eastern Railway during office hours.

Multiple local trains were delayed following the blockade at Pandua, Khanyan, Talandu, and Mogra, starting from 7.30am and ending at around 11am.

Passengers said railway authorities had cancelled and short-terminated many local trains on the pretext of  maintenance work in the Howrah-Burdwan section in the past few days. As a result, passengers who have to go to their workplaces in Calcutta are facing major harassment commuting.

“The railways are cancelling many trains during office hours regularly and it is not for one or two days but almost for a fortnight. Recently, they announced that train services would be disrupted for another 10 days starting September 3. How can we go to our workplaces if such things continue? The railways should think about the crisis that we are facing,” said a passenger at Pandua station.

Railways officials said train services had been restricted in the Howrah-Burdwan section as work on laying new third lines had begun.

“This would increase the number of local trains and their speed,” said a railway authority.

“We request the passengers to keep their patience

for a few more days as the competition of the work would help them get train services better,” said Eklabya Chakraborty, the chief public relations officer of Eastern railways.

Railway sources said they were trying to increase the number of local trains as much as they could during the period when the work to lay the third line was on.