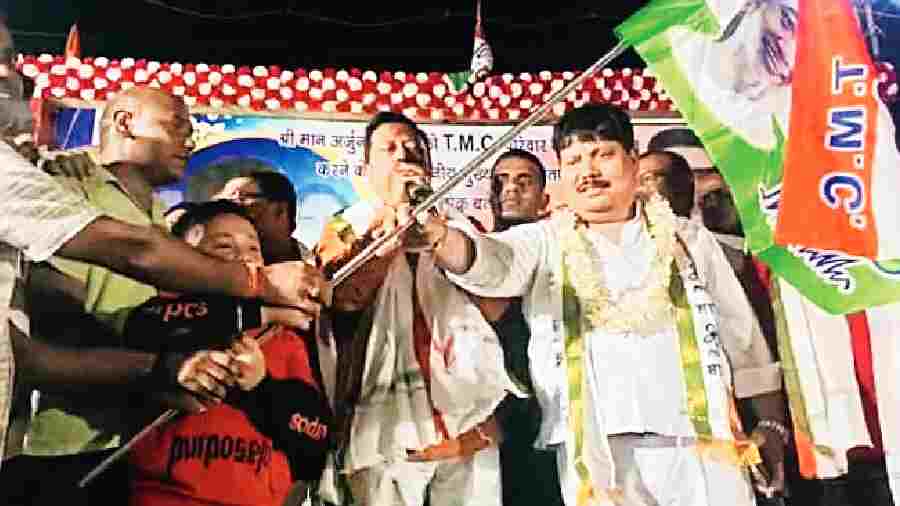 Arjun Singh hands over a Trinamul flag to his followers who joined the party at Kankinara on Tuesday.
Ankit Mukherje
Snehamoy Chakraborty, Subhasish Chaudhuri   |   Calcutta   |   Published 25.05.22, 02:13 AM

Barrackpore MP Arjun Singh who returned to the Trinamul Congress with huge fanfare on Sunday might have to wait for some time to regain his earlier position in the party.

The Trinamul leadership had already decided to send Singh to look after the party’s organisation in the Bongaon — a tough terrain for the ruling establishment following the rise of the BJP since 2019 — far away from his bastion of Barrackpore.

Multiple Trinamul leaders in Barrackpore said the decision to send Singh to Bongaon — national general secretary Abhishek Banerjee is believed to be behind the move — will serve two purposes.

“The return of Singh and the group pictures with senior leaders gave an all-is-well impression.… But most local leaders are not ready to accept him as a leader here anymore. He tormented so many of our ground level party functionaries. Our senior leaders have assured us that none of those who resisted Singh while he was in the BJP will be removed from their positions,” said a Trinamul leader in Barrackpore.

“That is why he has been asked to work in Bongaon so that the organisational balance is not compromised because of his return,” the leader added.

Before joining the BJP ahead of the 2019 Lok Sabha polls, Singh, the four-time Trinamul MLA from Bhatpara since 2001, was the last word in Trinamul in the Barrackpore industrial belt, dotted with jute mills and small manufacturing units.

After he joined the BJP, several new faces took control of Trinamul in Barrackpore and they played a role in ensuring the party’s victory in six of the seven Assembly segments in the Barrackpore parliamentary constituency in 2021, said a source.

“Senior leaders, especially Abhishek Banerjee, are against putting Singh above those who were with the party during the crisis and that was why he is sent to Bongaon,” said an MLA in North 24-Parganas.

A source recounted Abhishek’s earlier pledge that he would ensure that those returning to the party from the BJP would have to work hard to get back their position.

Sources have said Bongaon is still a stronghold of the BJP under the leadership of the MP and Union minister of state Santanu Thakur. “So, Arjun’s next assignment is quite challenging,” said a source.

Asked about the party’s decision to send him to Bongaon, Singh said: “Let me meet our chief minister Mamata Banerjee. I will do what my party will assign.”

Trinamul sources said the position of Singh will be cleared by Abhishek at his May 30 rally at Kankinara.

Assigning Singh to look after the party affairs in the Bongaon organising district has left the local party activists in a quandary. The party leaders and activists in Bongaon said they were confused about the role Singh was likely to play in the area.

Gopal Seth, who is the president of the Bogaon organising committee, said he wasn’t aware of Singh’s assignment in the area. “If it is true, everyone should accept it for the sake of the organisation.”

Many Trinamul workers, particularly those close to the Matua community, indicated there would be wide resentment if Singh was formally given responsibility in Bogaon.

A prominent MLA from North 24-Parganas told The Telegraph: “He (Singh) left the party ahead of the polls and no one will accept his leadership here.”