The speaker was Nandana Dev Sen, reminiscing about her mother and writer Nabaneeta Dev Sen 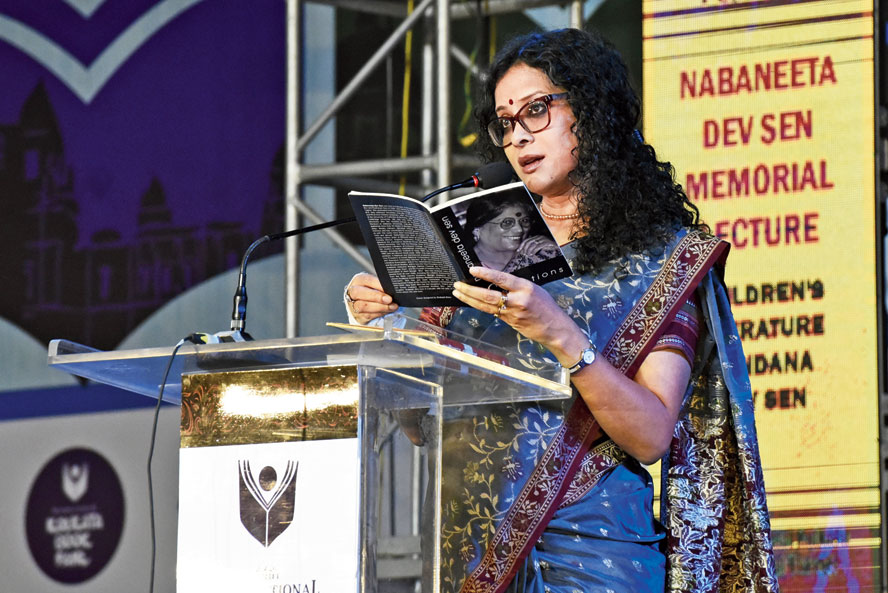 A children’s writer recounted the works of her inspiration at Calcutta Book Fair on Thursday, her voice choking more than once.

The speaker was Nandana Dev Sen and she was reminiscing about her mother and writer Nabaneeta Dev Sen, who passed away last November.

The senior Dev Sen dazzled in children’s literature, poems, short stories, novels, plays, travelogues and literary criticism and Nandana spoke about how her stories epitomised “inclusiveness and diversity” long before the words were in vogue in the genre.

Nandana was speaking at the Nabaneeta Dev Sen Memorial Lecture in the seventh edition of the Kolkata Literature Festival, in association with The Telegraph. The focus of the talk was on children’s literature.

“Ma used her fabulous imagination to instil empathy and tolerance in children…. Long before the words inclusiveness and diversity became key terms in the discussion of children’s literature, my mother’s stories epitomised both. Her heroine protagonists are not only queens and princesses but woodcutters, farmers, milkmaids, gardeners,” said the award-winning children’s writer.

“Without being at all preachy, her books focus a great deal on equality and social justice and teach children not to be afraid of the other. By creating loveable characters out of ghosts, giants and demons who are usually elsewhere portrayed as enemies, horrors and outcasts. Above all, my mother’s stories create a universe that is ruled by gender equality. A topic she was deeply committed to,” Nandana told a packed audience.

Nandana read excerpts from her mother’s writings to share with the audience “a few of her own thoughts in which she talks about her identity as a writer and the transformative power of children’s books”.

“Children’s books have a tremendous social purpose,” Nandana had learnt from her mother because they “stimulate children’s imaginations, build their confidence, develop their vocabulary and allow them to prosper in every sense as individuals”.

In a way, that has influenced Nandana’s writings, too.

“The first book I wrote — Mambi and The Forest Fire — came out of a workshop I did with children rescued from trafficking…. In it, a monkey who wants to fly and swim like her cool jungle friends realises that she has the special gift of jumping that allows her to save her friends,” Nandana said. “I used this story not only to speak about helping people in need but also to discuss equality that whether we jump or fly or swim, we all deserve to have the same love and self-confidence. Whether we are a girl or a boy, a Hindu or a Muslim, whether we speak Hindi or Bengali or English, we all have the same rights.”