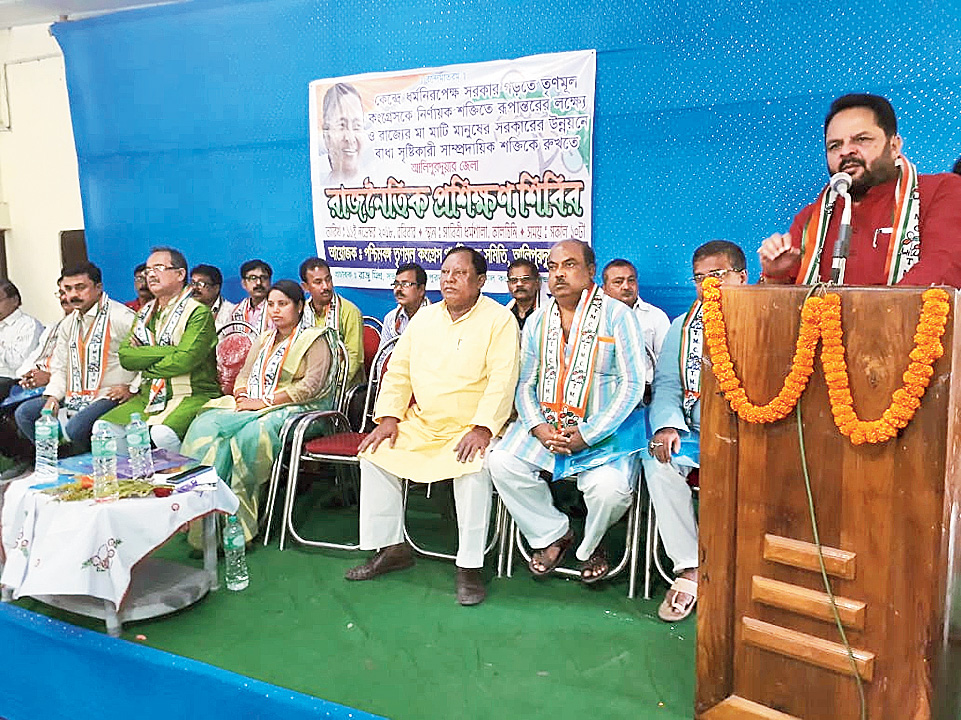 The Trinamul Congress on Sunday organised a “political class” in Alipurduar district to apprise teachers of the alleged anti-people policies of the BJP government at the Centre — the first such initiative by Mamata Banerjee’s party to flag off its grassroots campaign for the Lok Sabha elections.

The BJP had made some inroads into the district during the last panchayat elections winning eight of the 66 gram panchayats. Several Trinamul leaders had attributed the success to the RSS, which has been sending its activists to the district for a door-to-door campaign in the run up to next year’s Lok Sabha polls.

“Countering the BJP-RSS combine is the key to the preparation for the Lok Sabha polls and a workshop was organised in an attempt to do that,” said a Trinamul source.

The workshop, which was organised by the West Bengal Trinamul Para Teachers’ Organisation (Alipurduar district committee), was attended by two para-teachers each from all the 66 gram panchayats in the district.

Teachers are considered opinion makers at the village level and following the model adopted by the Left parties, Trinamul is trying to cash in on their influence in the rural society.

The importance of the initiative could be gauged from the fact that all senior leaders of Trinamul, including district chief Mohan Sharma, Alipurduar MLA Sourav Chakraborty, Falakata MLA Anil Adhikary, Alipurduar MP Dasarath Tirkey and Anop Chakravorty, the chairman the district school council, were present at the meeting held at Kalchini, about 35km from here.

Chakravorty said: “We expect the para-teachers to return to the villagers and take our message to them so that people are fully aware of the anti-national policies of the BJP and the RSS and how they have ruined the country. This political class was a very good initiative.”

Trinamul leaders admitted that the initiative was taken after they found that “RSS activists from outside the state” were quietly slipping into nooks and crannies of the district for a door-to-door campaign.

Raju Mishra, the president of the district’s para-teachers association, said: “We have seen that RSS activists from outside the state have infiltrated villages and are trying to reach out to the tribals and create difference among various people.”

Alipurduar, which shares borders with BJP-ruled Assam, is largely a tea growing area that has a significant tribal population.

“We spoke on a range of issues right from the negative effect of demonetisation, to the role of the Centre on the Rafale deal,” said Mishra.

Observers believe the initiative is also aimed at cementing Trinamul’s support base at the booth level before the Lok Sabha elections.