Facility to accommodate 32 cars set to be unveiled by July 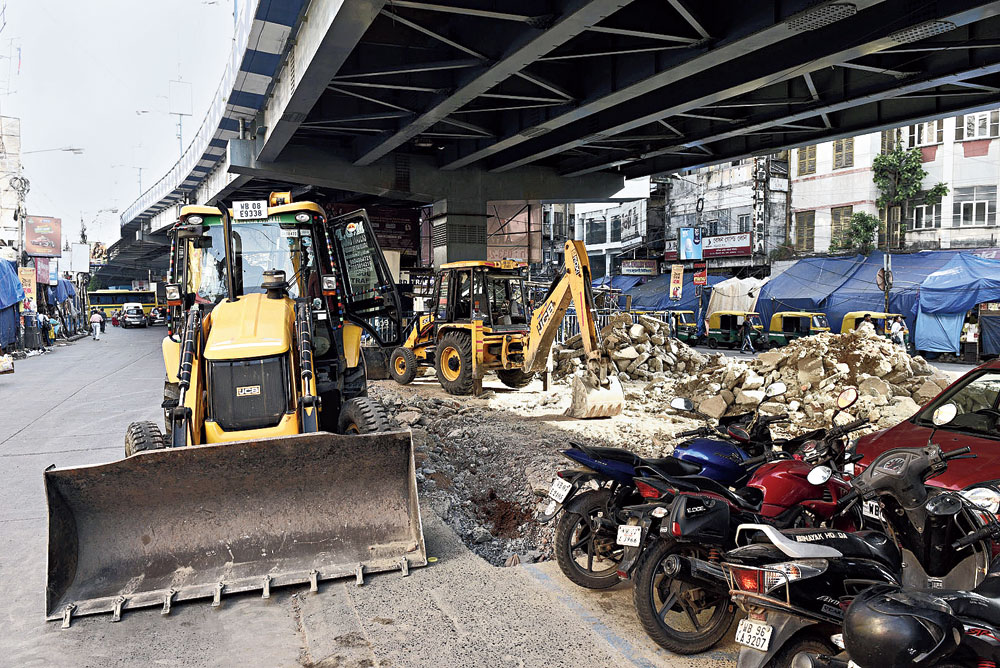 The hunt for space to park your car at Gariahat is set to get easier by July with Calcutta police building a three-tier parking facility at the busy shopping hub.

The automated parking facility will have space for 32 cars on a land parcel that now accommodates 12 cars, an official associated with the project said.

The multi-level parking facility, being built by Simpark Infrastructure Private Limited, is coming up under the Gariahat flyover between the Dover Lane-Gariahat Road crossing and the traffic police outpost.

“The facility will be unveiled before July,” the official said.

“We have started our work. The parking facility will come up in the 7.5m gap between the road level and the flyover,” the official said. “Cars on the lowest tier will be a little below the road. Or else, the three tiers cannot be built there.”

Lack of adequate parking space at Gariahat, one of the busiest shopping and commercial hubs in Calcutta, and in many other parts of the city, often

lead to car owners being fleeced by parking attendants.

The attendants allegedly charge twice or thrice the rates stipulated by the Calcutta Municipal Corporation during non-festive months. During Durga Puja, Diwali and other festive periods, the illegal parking charges are even higher.

“Attendants won’t let you park your car if you refuse to pay up what they are demanding,” said a schoolteacher who shops frequently at Gariahat.

Lack of space and extortion by parking attendants often force people to park their cars in lanes and bylanes around the Gariahat crossing.

In April, residents of Ballygunge Place had held an agitation to protest the inconvenience they faced because of cars parked in front of their gates and garages. They had demanded that vehicles ferrying schoolchildren be barred from entering the neighbourhood.

A police officer who managed traffic at Gariahat for many years said there were about 200 parking slots along 100m of roads on all four sides of the Gariahat crossing.

The entire zone remains occupied every day. “During festive seasons cars are often parked in two lines, narrowing the carriageway. Sergeants have to be deployed to restore order,” he said.

The Gariahat structure will be divided into two blocks, each having 16 slots. The top tier in each block will have slots for six cars and the other two tiers five each.

“The slots will keep moving to occupy any vacant space on any of the tiers. It’s called puzzle car parking system and is being implemented in a public space in Calcutta for the first time,” the police officer said.

A Simpark official said: “Civil construction work such as building the foundation is under way. The mechanical portion is all pre-fabricated. The parts will be brought here and fitted together.”

Sources associated with the project said more organised parking facilities could be built at other locations near the Gariahat crossing and also at other parts of the city.

“Gariahat is a busy crossing and there is always a demand for more parking space there. The multi-tier parking will naturally make it possible to park more cars in limited space,” said Santosh Pandey, deputy commissioner of police, traffic.

An automated parking facility under New Market, which could accommodate 250 cars, has remained shut for around three years.

Another such facility, on Rawdon Street, has space for 219 cars.

Simpark had built both facilities. The management of the Rawdon Street parking lot is with the Calcutta Municipal Corporation.