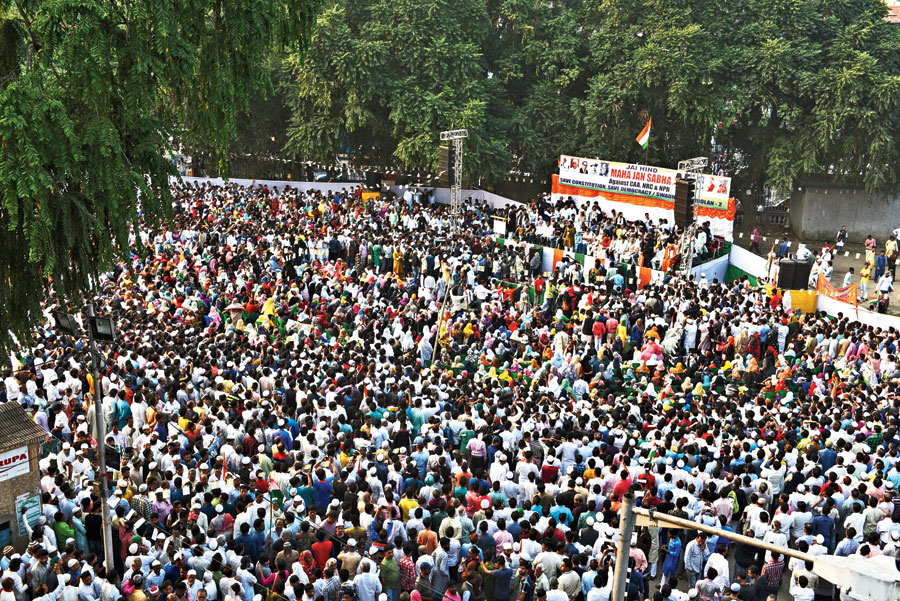 Three bullets had killed Mahatma Gandhi. People responsible for the murder of the Father of the Nation are threatening to kill India with the same number of bullets — CAA, NPR and NRC, the Mahatma’s great grandson said on Friday.

Tushar Gandhi was addressing a rally of over 30,000 people who had assembled at Park Circus Maidan to protest the Citizenship Amendment Act, National Population Register and the National Register of Citizens.

“They had pumped three bullets into Bapu’s chest,” he said. “The same people are now killing the country in the same fashion with the three bullets of CAA, NPR and NRC. Remember, their nature has not changed. But we should tell them that our chest is so strong that we will not break down in the face of their bullets.”

The rally — Maha Jan Sabha — infused fresh life into the women-led protests against the new citizenship matrix, which had started on January 7.

Such was the turnout that it was difficult to spot the ground from the Parama flyover around 5pm. All one could see was a sea of heads.

From a young well-heeled lawyer of Calcutta High Court to a 70-year-old wheelchair user who lives on people’s alms, Park Circus Maidan was a melting pot. A sizeable part of the crowd was made up of women.

One of the stars was 82-year-old Bilkis, a “dabang (fearless) dadi (grandma)” who has emerged as one of the most prominent faces of the vigil against the citizenship regime at Delhi’s Shaheen Bagh.

When Bilkis took the mic around 6.10pm, thousands in the audience sprang to their feet and lit their mobile phone torchlights in solidarity with her fight.

“They are saying we are at Shaheen Bagh because of free biryani. I want to tell Modi that you had gone to Pakistan to have biryani. What about that?” she said. The frenzied applause that followed took several seconds to cease.

Tushar Gandhi stressed the need for protesters to remain non-violent. “If we have to shed our blood for this country we are ready for that, but we will not shed the blood of those who are opposed to us. Our success lies in the fact that they are being forced to take recourse to violence in the face of our non-violent movement,” he said.

He said a “doghli sarkar” (two-faced government) was at the helm. “So what if your forefathers are buried in this land, they will tell you to get out. Some other communities will get a chance at citizenship through the CAA. But for that, you have to lie to them that you are not an Indian citizen and are seeking refuge…. Sachchai se bedakhal, jhoot bolne se wapas (driven out by truth, taken in by lies),” he said about the citizenship matrix.

Among the speakers was Raj Ratan Ambedkar, the great grandson of the chief architect of the Constitution, B.R. Ambedkar. He made an impassioned appeal to the people to reject the CAA-NPR-NRC.

Raj Ratan Ambedkar explained why “these people (BJP-RSS) are scared of the Constitution”.

“Because, before the Constitution, we were untouchables. The same people who were not allowed to travel on bullock carts are now flying. The BJP wants to impose Manusmriti and is opposed to this,” he said. The new citizenship exercise was not only “discriminatory against Muslims but would affect tribals, Scheduled Castes, Scheduled Tribes and other backward classes,” he said.

Sugata Bose, professor of oceanic history at Harvard University, later told The Telegraph that an indirect election of the Constituent Assembly was held in 1946 and Ambedkar was elected from the Jessore and Khulna constituencies.

The rally at Park Circus started around 3.50pm. The crowd started gathering from noon. People from demonstrations all over the city arrived at the ground in groups.

Mohammad Saifulla, 70, came on a wheelchair-rickshaw. The man, who lives on a pavement in Beniapukur, ekes out a meal or two by begging. “I have come to listen to Dadi. If it means missing a meal, so be it,” he said.

Bilkis took another allegation against the Shaheen Bagh protesters head on. “Some people are saying we are getting Rs 500 a day for sitting there (at Shaheen Bagh). I am telling Amit Shah that we will give you Rs 1 lakh if you sit with us for one day,” she said.

At the end of the rally, a couplet was read out: “RSS toh fasadi hai, un par bhari hamari Dadi hain (RSS is a trouble-maker, but Dadi is a even bigger threat to them).”

Thousands in the crowd at Park Circus Maidan sprang to their feet and flashed their torchlights as soon as Bilkis rose to speak at 6.10pm on Friday. Deafening roars of dabang dadi zindabad rang through the air

If a group of college students skipped afternoon classes to join the thousands who had gathered at Park Circus Maidan, a 75-year-old man overcame chronic pain in his knees to be there. A Sikh man came because he wanted to stand with the community, which he said is being “selectively targeted”, like what was done to the Sikhs in 1984. They shared with The Telegraph what brought them to Park Circus Maidan

Ghulam Abbas, 75, a former manager of a public sector undertaking who needs a walking stick to move around, came to Park Circus Maidan with wife Kausar Parveen.

He wanted to listen to Bilkis, who is seven years older than him. The woman from Delhi’s Shaheen Bagh has emerged as an icon in the fight against the amended citizenship regime.

“I suffer from a chronic pain in my knees. But I told my wife that I would go to the protest venue today. If she (Bilkis) can carry on the fight and come all the way from Delhi, how can I remain at home?” asked Abbas.

Pradip Biswas, 67, represented a Christian forum from New Town. He felt the government was targeting Muslims now but the discrimination would not end there. “Next, it will be Christians, then tribals and Dalits. This is not going to stop until they impose their North Indian Brahminical view on the entire country. So, we need to stop the divisive forces now,” he said.

Asmat Jamil, who started the Park Circus vigil, said she was overwhelmed that she shared the stage with a descendant of Mahatma Gandhi. “We were seven women who started this demonstration inspired by Bapu,” she said.

“At a time when the country is fighting the divisive acts, it was okay to miss a couple of classes. The chance to listen to hear from some of the real-life fighters was an irresistible one. How could we miss it?” said Piya Saha.