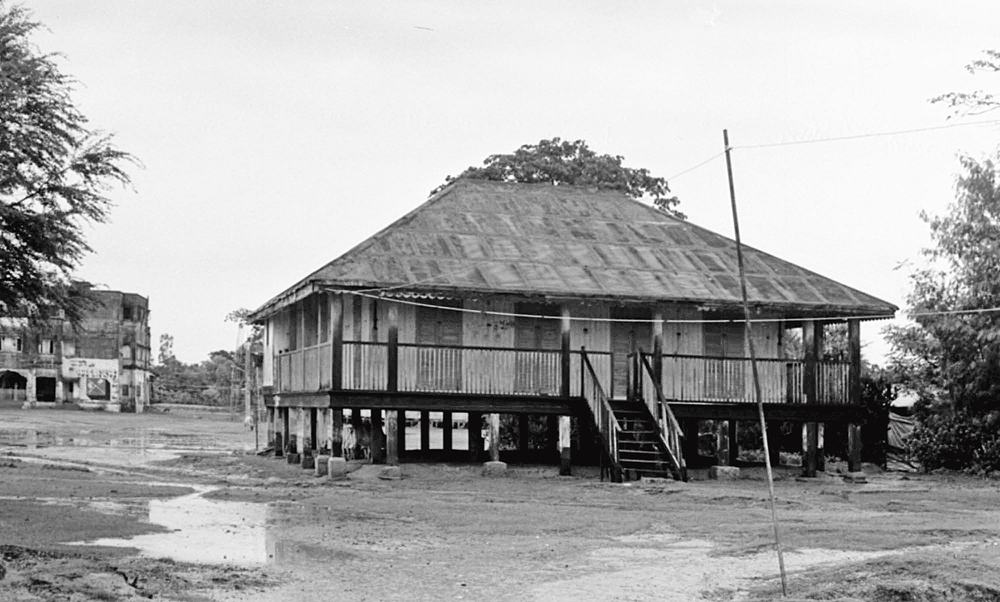 You know, Hamilton Sahib used to say that mahajans are like ‘hookworms’,” he says, leaning in conspiratorially. Then adds, “Hamilton Sahib was against jotdars or mahajans, basically middlemen.”

The speaker is Swapan Mondal, a schoolteacher and resident of Gosaba, a cluster of islands in the deltaic Sunderbans. Mondal has done extensive research on land reclamation in the Sunderbans area.

It seems, during the 1943 Bengal famine, Gosaba was not affected. While that might sound difficult to believe given the sweep of the famine — of a population of 60.3 million, nearly 2.1 to 3 million people died of starvation, malaria and other diseases — Mondal says there is proof in the form of extensive documentation. More about that later. And the reason Gosaba pulled off this miracle had to do with a Scotsman named Daniel Mackinnon Hamilton.

Hamilton was in his early twenties when he was sent to the Calcutta office of Mackinnon Mackenzie & Co. Ltd, a shipping company on Strand Road. Those days, the Sunderbans were uninhabited islands, the den of pirates and man-eaters. The river waters were infested with crocodiles. And then the company identified portions of the geography that could be turned into fertile and productive land. That land was then divided into several “lots”.

Says Mondal, “Almost 236 lots or reclaimable lands were identified in Bengal alone. It was planned that this cluster of islands would be made productive — rice would be cultivated and the islands would be inhabited. Accordingly, lots were leased.”

Acting in his individual capacity, Hamilton took land on lease in the Sunderbans. He writes in a journal: “In the Sunderbans of Bengal is a block of land which is now the home of the tiger and the deer, the wild boar and the crocodile. Two or three hundred years ago, I am told, it was the home of men, and I understand that the remains of old buildings and roads may still be seen. I am applying to the Government of Bengal for that land on which with the help of the bhadralok, the rayat and the Government of India, I shall create a zamindary of 30,000 biggahs or 10,000 acres, and hand it over to the Government of Bengal free of cost.”

He reached there with his band of trusted coolies. The rest of the lots were taken up by Bengali “bhadralok” — Bengali middle-class businessmen who subleased the plots and reaped profits.

Hamilton stayed in the islands and worked to make them habitable. Kalipada Bhattacharya, a teacher in a Gosaba school, wrote a biography of Hamilton, titled Mahapran Sir Daniel Mackinnon Hamilton, in 1955.

In it, Bhattacharya notes that Hamilton used to stay in a house built on stilts whenever he visited his estate every year during the winters.

Gosaba endures, not as Hamilton’s dream but for its tales of human suffering
File picture by Tapan Das

In 1904, a year after he first arrived in Gosaba, he started the co-operative movement.

To understand his effort, it is imperative we understand the man. The man who wrote: “The working capital of the world is, therefore, not money, but Men. When the Government of India grips and acts on the truth of this positive reality, India’s restless sea will settle and its storm clouds disappear.”

The first thing that Hamilton did was to try and make the island arable. He cleared up the jungles and raised the level of the marshy land so that it would become arable. To prevent the saline water from inundating the lands, dams were built.

There was an acute shortage of drinking water and, to address that, Hamilton spent a lot of money and bought a water-purifying machine. The remnants of this machine are still there in Gosaba, as is his house, which is now a tourist attraction.

As the population of the area increased, all these measures fell short. Hamilton had brought in labourers from Chhotanagpur, Birbhum, Bankura and Mayurbhanj at high wages to work in Gosaba. To meet the shortage of drinking water, he decided to dig up water tanks in the villages that fell within his estate. Saplings were also planted on the banks of these water tanks to prevent erosion.

Four years on, these plots were finally arable. And then came a flood and washed away all the dams, and the soil was unfit for cultivation yet again. Says Mondal, “He must have been some man because Hamilton started work anew.” According to the 1909 Census, the population of Gosaba was 900 — of this 600 comprised labourers, few were members of the estate staff and the rest of them were people who had settled down as farmers. In 1910, Hamilton started building a co-operative.

First, he leased his land to the farmers. “A man was allowed to hold only 25 bighas of land and his wife could apply for another 20 bighas. Thus the total land that was available to one particular family was 45 bighas,” says Mondal. Hamilton signed contracts directly with the farmers. The “hookworms” were ousted. “Hamilton’s main objective was to make the residents self-reliant in every aspect,” says Mondal. And in keeping with that idea he arranged for interest-free loans from the estate itself. And in 1918, he built the Gosaba Co-operative Store.

The cooperative was supposed to supply the residents everything — rice, pulses, soap, detergent and kerosene — at a fair price. In 1925, an association was set up to sell grains on behalf of the farmers. But Hamilton had found out that the price of rice was higher than grains. Two years later, he set up a rice mill. Another two years later, he floated the idea of a dharmagola or a store house for rice grains.

Mondal elaborates, “After the harvest, the grains would be still wet and would not fetch much money. As the villagers could not afford to build storehouses themselves, Hamilton facilitated one. Rice grains were stored in the common golah and sold when the market was robust. People used to get the money from the sale along with a percentage of the profit that the co-operative earned after deducting tax and the loan amount that the farmer had taken.” Mondal adds, “This way, there was no way that a farmer would not be able to pay off his debt.”

Gosaba became a model farm for developing an economy. Free schools, night schools and free dispensaries came up. Hamilton introduced a Re 1 currency note. It read: “Sir Daniel Mackinnon Hamilton promises to pay the Bearer, on demand, at the Co-operative Bhundar, in exchange for value received, One Rupee’s Worth of rice, cloth, oil or other goods (sic).”

During the Great Bengal Famine, these storehouses saved the lives of thousands of Gosaba residents. Mondal says, “That year, the co-operative inspector who audited its financial documents observed in his report that the Gosaba Co-operative made profits during the famine and that the region was not affected by the famine.” All the written records were found in the office of the co-operative society. In fact, the inspector changed the grading of the Gosaba Co-operative Society from Grade C to B — which implied that its performance had gone from good to better even in the famine year.

To the end, Gosaba remained dear to Hamilton, so much so that he remembered it even in his will. He wrote: “The Trustees will be careful to see that the embankments of Gosaba are always kept in first class order. And it is my wish that the properties should be worked on the same line as now, and that any profit should be utilised for the establishment of similarly worked properties in other parts of India.”