On campaign trail, the chief minister accuses BJP of scuttling her foreign programmes out of jealousy 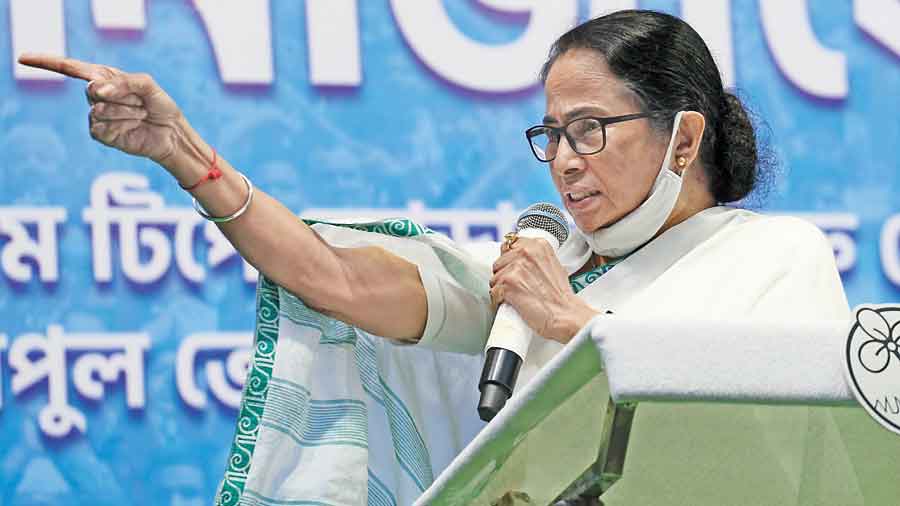 Mamata Banerjee on Sunday reeled off a number of programmes which she couldn’t attend abroad because of alleged meddling by the BJP as the Trinamul Congress supremo stepped up her attack on the saffron camp during her campaign for the Bhowanipore bypoll.

The latest addition to the list of programmes which the Bengal chief minister wouldn’t be able to take part in is World Peace Conference in Rome in October.

“If there is peace anywhere in this nation right now, it is Bengal. That is why Bengal gets asked to attend global peace conferences. Those who are hingshutey (envious), they say, no, one cannot go there, it supposedly was ‘not fit’. What then is fit? Who decides what is unfit? I cannot figure out what is good and what is bad for me, without your explanation,” Mamata asked in her penultimate campaign rally at Jadu Babu’s Bazaar.

On Saturday, the Centre had denied Mamata permission for the visit to Rome to attend the event that she had been invited to by Macro Impagliazzo, the president of Community of Sant’Egidio, a Catholic association based in the Italian capital.

“There are many states that don’t even seek permission. I do. Because I maintain some courtesies, discipline. Because I believe in matters of external affairs, the states should stand by the Centre. I always extend unflinching support, when it comes to external affairs,” she added.

At the Jadu Babu’s Bazaar rally, Mamata brought up some of the events that she couldn’t attend on account of alleged meddling by the BJP.

“Before this, where Swami Vivekananda had delivered that landmark address in Chicago, there, too, my programme was stopped. You know that I had a programme to go to China — not my plans, but of the Centre — but it was called off at the last minute. My lecture at Cambridge, they stopped it. St Stephen’s had invited me, they had stopped it,” she said. Mamata ended her bypoll campaign on Sunday.

The trips to the US and China, besides a St Stephen’s College event, that she mentioned were all cancelled in 2018.

In September, 2018, Mamata had blamed an “awshubho chokranto (unholy conspiracy)” for her not being able to attend a Chicago event commemorating the 125th anniversary of Swami Vivekananda’s address at the World’s Parliament of Religions. After she had been invited to attend the Chicago event, she received a letter from the Vivekananda Vedanta Society of Chicago, saying it was being called off.

In June 2018, Mamata had cancelled her nine-day trip to China hours before her flight as Beijing could not confirm her meetings with the Communist Party of China’s leadership at an appropriate level. The year before that, Mamata had been “advised” by the Centre against going to China to seek investments because of the Indo-China border standoff at Doklam.

In July 2018, a proposed address by Mamata to students of St Stephen’s College in New Delhi was cancelled, allegedly under “saffron pressure”.

Although the chief minister mentioned Cambridge in her speech on Sunday, sources in her party said she meant a virtual Oxford Union programme last year, which also got cancelled 40 minutes before it was to take place, which Trinamul attributed to “political pressure from the highest levels”.

“When she said Cambridge today, she meant Oxford…. She did get invited to deliver a lecture at Cambridge University, in 2010, while she was the Union railway minister, but she did not accept that invitation. In 2011, she was invited to address Harvard University’s history department, but she didn’t go,” said a senior Trinamul Rajya Sabha member.

Mamata, in her speech at Bhowanipore, went on to dare the BJP over its alleged influence to ensure cancellation of such events.

“How many will they stop? Because you (the BJP) are in power today, you think no end of yourselves…. There will come a great fall in the future,” she said.

“I am going to talk about global peace from right here…. Where all will you keep me from speaking? Even if I cannot go there, I will say everything from here. Not once, thousands of times,” added Mamata. “I hail the World Peace Conference. I thank them from the bottom of my heart… especially how the government of Italy specially gave clearances so I could attend.”

Earlier in the day, BJP MP Subramanian Swamy — with somewhat of a reputation for shooting from the hip and embarrassing the saffron camp — tweeted a statement of support to Mamata, demanding answers from the Centre on the denial of permission.

“Why was Bengal CM Mamata prevented by Home Ministry from attending an international conference in Rome? Which law prevented her going?” asked Swamy on Twitter.

“I think I should do a tutorial on Article 19 of the Constitution which includes freedom of travel as a fundamental right but subject to reasonable restrictions. SC in many judgments has given the scope of these restrictions. But scope does not include reason of “not fit for CM”,” he added.