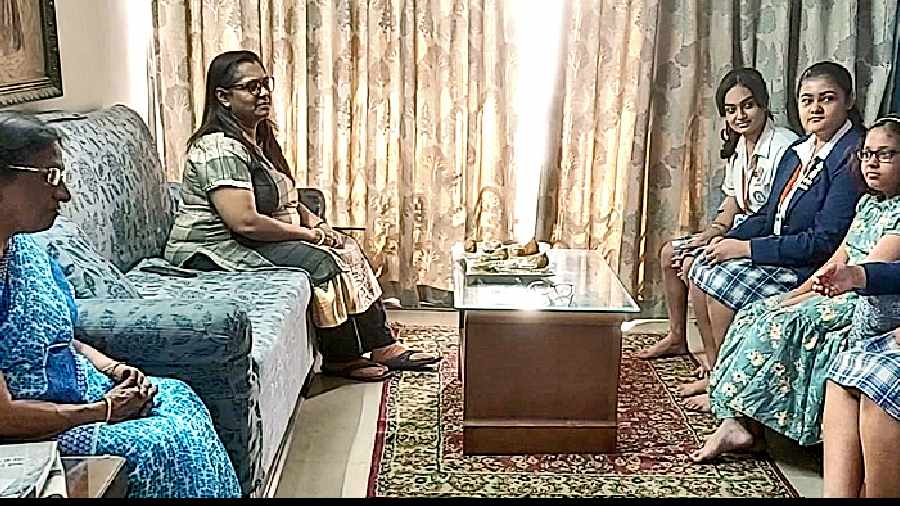 Students of Mahadevi Birla World Academy interact with grandparents of other students of the school
Jhinuk Mazumdar   |   Calcutta   |   Published 06.12.22, 05:08 AM

A 16-year-old who lost her grandfather last year was one of the first students to register for a programme where she got an opportunity to spend time with grandparents of other students of her school.

Mahadevi Birla World Academy has started an initiative to facilitate interactions between students of senior classes and the elderly. During the sessions, the students read out stories to the elders, teach them how to use apps or simply sit and talk to them.

Students of Classes IX and XI have volunteered to spend time with grandparents of children in the middle school, officials of the school said.

For Aarya Singh, whose grandfather died last year, the experience was “overwhelming”. The sessions reminded the 16-year-old of the days she spent with her grandparents.

“My grandfather, who lived with us, passed away in January 2021. During the pandemic, my grandfather and I had spent a lot of time together. Suddenly there was a gap,” the Class XI student said.

Her grandmother, who would read out stories to Aarya, had passed away in 2016. “On Saturday, I felt nostalgic as I read out a story to grandparents. I did not get enough time to spend with my grandparents. This session gave me an opportunity to make up for it partially,” Aarya said.

The school had distributed two forms for the programme called “Service before Self” — one for middle school students whose grandparents could register for the programme and the other for students of senior classes who want to volunteer to spend time with the aged.

“We want students to give their time to others. They should find time for others, too,” said Anjana Saha, principal of Mahadevi Birla World Academy.

Another Class XI student, Gurpreet Kaur, who would spend her weekends playing online games or sleeping, said the experience prompted her to introspect.

“My grandparents do not live with us. I felt I should go and meet them more often despite my busy schedule. If I can’t meet them, I should at least speak to them over the phone more regularly.”

Pushpa Devi Agarwal, 74, who had registered for an interactive session about a month back, was eagerly waiting to spend time with young students.

“I do not go out often because of pain in my knees. I enjoyed the company of the children who were so spontaneous and warm,” she said.

“We want the students who have taken part in such sessions to share their experiences with other students. In the form we ask the elderly persons their preferences so that students can go prepared,” said Debanjana Roy, teacher coordinator of the Interact Club of the school.