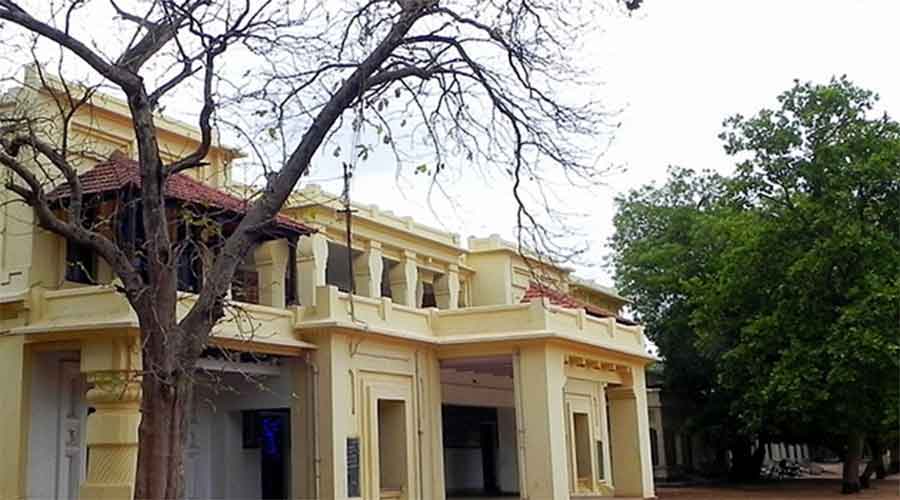 The teachers condemned the VC’s for repeatedly referring to the varsity as the proverbial “goose that lays the golden eggs”.
File picture
Snehamoy Chakraborty   |   Santiniketan   |   Published 27.08.20, 01:59 AM

Visva-Bharati University Faculty Association has sent a letter to vice-chancellor Bidyut Chakrabarty, accusing him of lacking focus in academics and curtailing democratic environment on the campus while he extolled the virtues of freedom by quoting from Rabindranath Tagore’s poems.

Coming in the midst of the ongoing controversy over building of a boundary wall on Pous Mela ground, the teachers’ body has highlighted in its letter how Chakrabarty’s role was detrimental to running the institution that Tagore had set up in keeping with his vision of education.  They have urged the VC to get back his focus on academic activities.

In the past two months, Chakrabarty has written nine letters that ran into 56 pages and shared those in the public domain. Going beyond the nine letters, the VC had on August 22 issued a “special missive” that sparked off a controversy for describing Tagore as an “outsider” to Santiniketan.

Referring to the gag order on Visva-Bharati employees, including teachers, the association flayed the VC for quoting Tagore’s famous lines — “Where the mind is without fear and the head is held high” — in his last of the nine missives issued on August 15.

“While teachers and staff are not allowed to air their opinion in the public domain, the VC indulges in double standards by referring to the poem where Tagore urges his countrymen to realise the need to live in a free country,” a teacher said.

The letter holds Chakrabarty responsible for the flaws that had crept into the Visva-Bharati system and led the varsity to lag behind other central universities.

Firing its salvo at the VC, the teachers’ association criticised him for lowering the morale of Visva-Bharati stakeholders by blaming them for the deterioration of the institution.

The teachers condemned the VC’s for repeatedly referring to the varsity as the proverbial “goose that lays the golden eggs”. The teachers’ body claimed the reference was deeply demeaning to the entire Visva-Bharati community.

The letter states: “In the missives as well as on several other occasions you have publicly made extremely derogatory statements about the faculty members.”

In a sharp criticism, the association describes the missives “...as an audit inspector’s report of a commercial company, not the prognosis and developmental agenda of the Vice-Chancellor of Visva-Bharati. We strongly object to such factually incorrect, grossly generalized, disparaging and deeply demotivating remarks”.

The teachers “politely” reminded the VC that the institution did not require “sanctimonious reformers... We need leaders – firm, sympathetic, just and with vision”.

Pointing to the undemocratic environment on the campus, the letter stated that the “faculty members, other employees, and students, who don’t even have any elected representation in the administration, or have little role to play in policy making and administration, kept bearing the brunt of the aggressive reformist agendas”.

The letter said that VC’s repeated idea of “Visva-Bharati parivar” was antithetical to Tagore, who in his writings had deplored the concept of parivar (family) as he felt it was often “synonymous with paternalism and a tool for suppression of dissenting views”.

The teachers urged Chakrabarty to initiate a serious campus-wide discussion for academic rejuvenation and development of Visva-Bharati before formulating the course of action.

The teachers’ body has implored the VC to believe in the leadership as Tagore had envisioned and expressed in the most consummate manner in his song: “We are all kings in the kingdom of our kings”.