The decision drew flak from trade unions, which accused the management of trying to evade responsibility 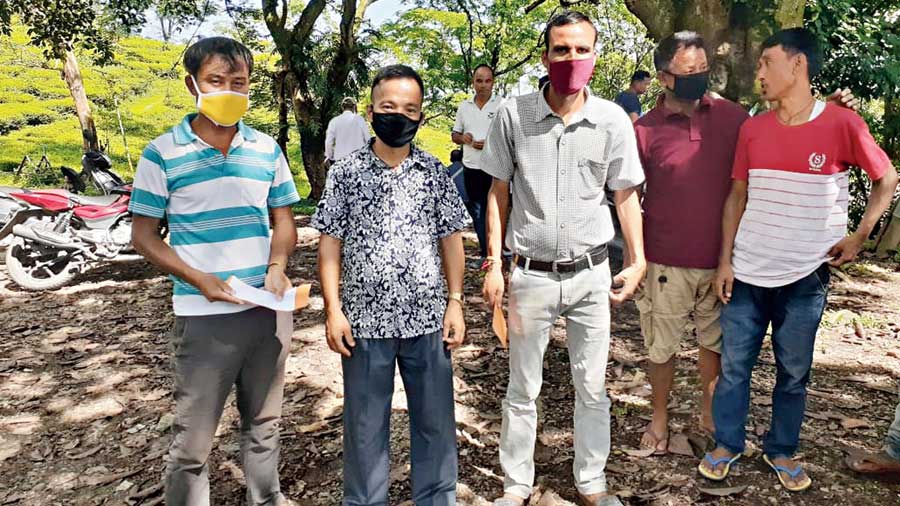 Tea trade union leaders near the protest site at Longview tea estate on the outskirts of Siliguri on Saturday.
Passang Yolmo
Our Correspondent   |   Siliguri   |   Published 23.08.20, 01:57 AM

The management of Longview tea estate, on the foothills of Darjeeling hills, declared suspension of work since Friday, citing worker unrest for over 10 days.

The decision drew flak from tea trade unions, which accused the management of trying to evade responsibility and pointed out that the management had not paid workers their dues amounting to nearly Rs 90 lakh. This forced workers to resort to hunger strike since August 19, leaders said.

Longview, spread over 500 hectares and with some 1,200 permanent and casual workers, falls under Kurseong subdivision of Darjeeling. It is one of the 87 tea gardens that make orthodox Darjeeling tea.

Management sources said some workers resorted to protests since August 10, did not work, confined the manager a number of times and abused and intimidated him.

“The garden can’t be run like this,” a source said, claiming that though efforts were on to resolve the issue through talks, most tea trade unions were not interested.

“Wages of employees are up to date. But because of the Covid-19 pandemic and lockdown, work stopped and arranging funds to pay a part of the bonus became a problem. It was agreed that bonus would be paid in September but still workers acted this way.”

Four trade unions, backed by GNLF, the Binay Tamang faction of Gorkha Janmukti Morcha, Trinamul and Citu, were organising the hunger strike and wanted the management to clear dues this month.

Nima Lama, a senior GNLF leader in Kurseong, said payments of Longview workers were irregular since December, before Covid-19 problems emerged. The management declared a lockout and the garden was closed till January 30 this year, he said. “When it reopened, the management had said dues, including bonus dues, would be paid at the earliest. Seven months passed and dues are close to Rs 90 lakh now,” said Lama.

“We want the state labour department to intervene and see that the garden reopens at the earliest,” another trade union leader said.