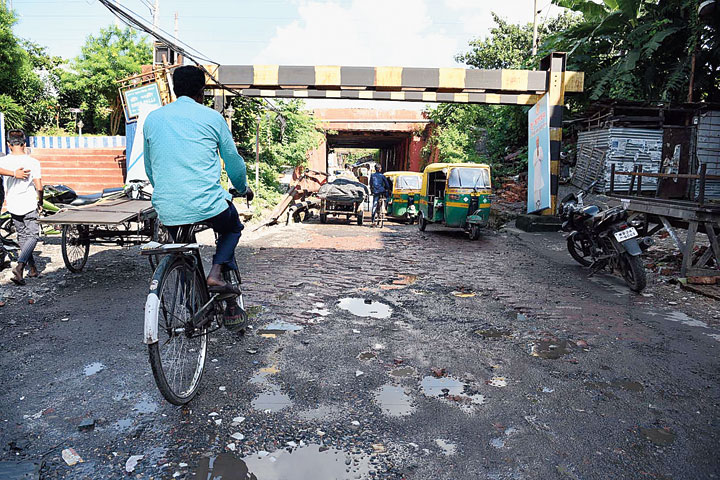 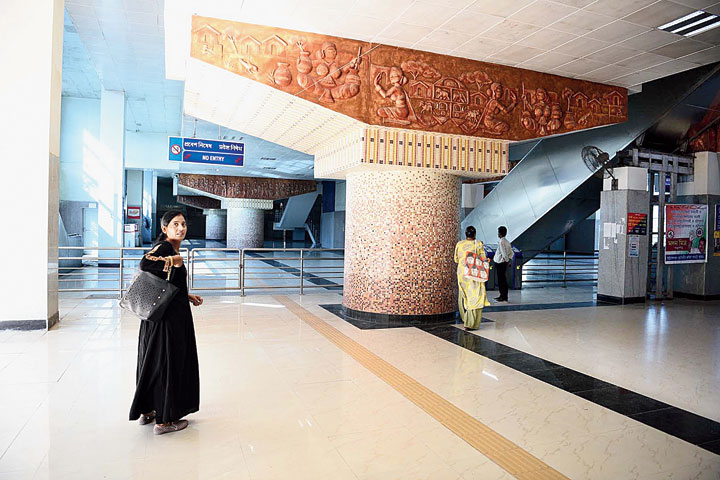 Heavy rain last Wednesday had flooded the road along the Bagjola canal that autos take to ferry commuters between Noapara station and Dunlop and Bonhooghly. On Thursday, autos from Dunlop could not go beyond the Noapara bus stop because the rest of the road leading to the station was still flooded.

“The roads are pathetic on a normal day. When it rains, the ride becomes a nightmare,” said Arnab Banerjee, a Dunlop resident who has been taking Metro from Noapara for the past few days to travel to his office in central Calcutta and back home.

The roads in the interior pockets of Belghoria — such as Adarshanagar and Jatin Das Nagar — through which autos and pool cars ply are dotted with giant craters, which were filled with water a day after the downpour.

On one stretch, the top surface of the road had come off, baring the layer of bricks and red soil underneath.

The auto drivers are not complaining though. “Earlier, I used to make three to four trips in the morning and as many in the evening. Now, it has gone up to around 20 trips a day,” said Biplab Das, an auto driver on the Noapara-Dunlop route.

Earlier, the autos outside Noapara station had to wait for several minutes for passengers. Now, a queue of passengers is a normal sight during rush hours.

Before September 29, when the bus ban on the Tallah bridge came into effect, the daily average passenger count at Noapara Metro station was 9,500.

The sprawling but sleepy Metro Railway station in Noapara has sprung to life because of the traffic curbs on the Tallah bridge.

The passenger count at the station has shot up by over 50 per cent in the wake of the bus ban on the ailing bridge, which connects Calcutta with large parts of North 24-Parganas.

Thousands of office-goers from Dunlop, Bonhooghly, Belghoria and other areas on the northern fringe, who would come to the city by bus via the Tallah bridge, are now opting for the Metro link from Noapara.

But the roads leading to the station are narrow, bumpy and pothole-ridden. The Noapara bus stand is around a kilometre from the station. Autos and small vehicles such as Tata Magic are the only public transport options for commuters to and from the station.

Metro officials expect the number to stay over 15,000 in the coming days as well.

“The state government needs to improve the roads leading to the station and increase the number of autos and other shuttle services,” said a Metro official. He recounted that Noapara was known as “narak para” (neighbourhood of hell) in Metro circles when trains did not go beyond Dum Dum. “When the station was coming up, the area was like a remote island,” he said.

Inside the station, the lives have changed for the staff. “Earlier, we would deploy two men at a gate. Now, we cannot afford more than one. We need men everywhere — at the ticket counters, main gates and smart gates,” the official said.

The station has two gates at the moment. The second gate, on the northwest end, was opened on October 2. There are three ticket counters. One additional counter has been set up but it is yet to become fully operational. 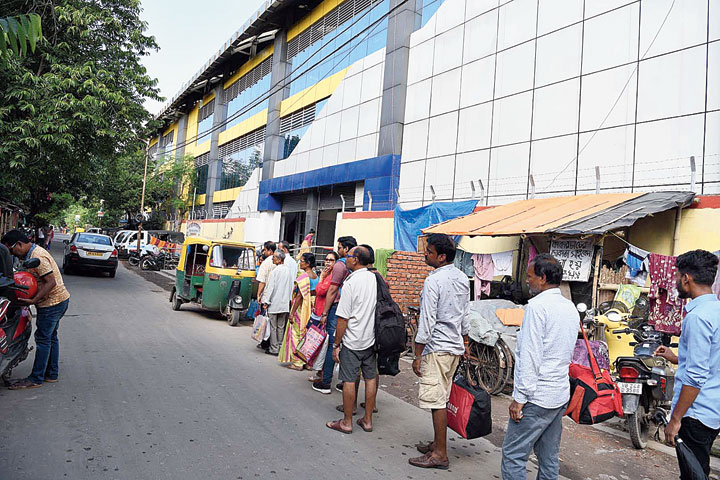