Suranjan Das would rather quit than call police

Minister to VC: You’re a Leftist. You should have been here to receive me 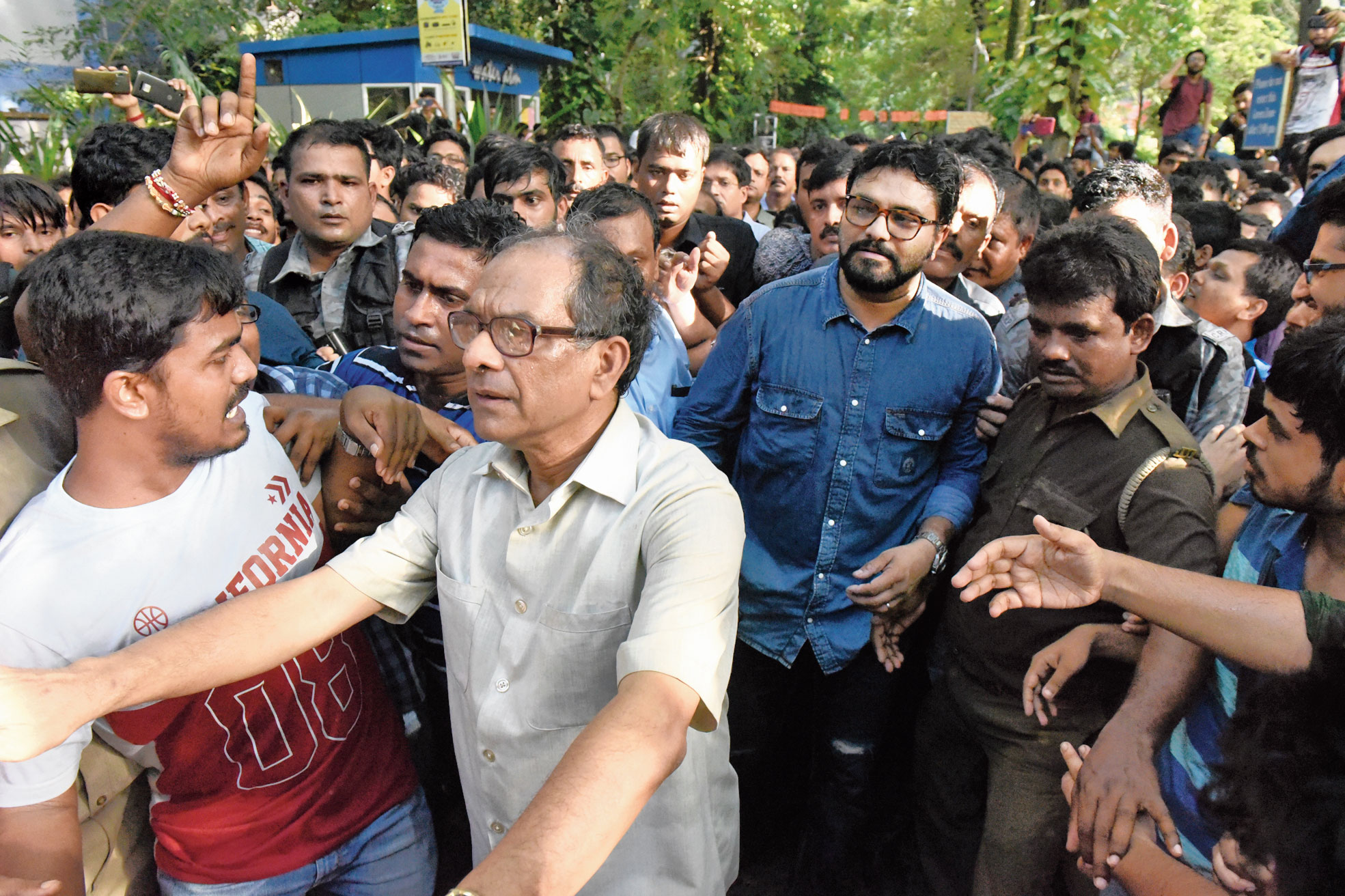 Call police, the Union minister said. I would resign but not call police to the campus, the Jadavpur University vice-chancellor retorted.

The stand-off between hundreds of students and Babul Supriyo was marked by a rare exchange during which the singer-turned-BJP politician called the academic “a Leftist” and told him to “resign” when he refused to call the police.

“You are a Leftist,” Supriyo shouted at VC Suranjan Das outside an auditorium at JU. “You should have been present to receive me,” the minister said.

“I was not even invited to the programme. How can I come?” Das tried to reason.

The minister was angry that Das had turned up about 15 minutes after Supriyo arrived on the campus.

The invitation for the programme on the campus, organised by the Akhil Bharatiya Vidyarthi Parishad, the students’ wing of the RSS, introduced Supriyo as “sangeetshilpi (singer)”, not minister.

The vice-chancellor of another university said a VC was under no compulsion to receive a minister, even if he or she came in his or her official capacity.

Supriyo’s gun-wielding guards, part of his official security detail, were seen throwing a ring around him. Some students questioned why he had entered the campus with his guards.

Supriyo narrated a conversation he had with Das after the minister was stopped from leaving the venue at the end of the programme.

JU officials, who were present at the meeting, said Supriyo even asked Das to put in his papers. “The minister told VC that he should resign as he was unable to control the situation,” an official said.

Supriyo said he sought advice from current chancellor and his predecessor before asking Das to call the police. “I had called Keshari Nath Tripathi (who was chancellor before Dhankhar replaced him as governor) and he said the vice-chancellor is well within his rights to call the police inside the campus,” he said after coming out of the meeting.

He added that current governor Dhankar had also told him that the VC could call the police. “So, I asked him (VC) why he was not calling the police?” Supriyo said.

The last time the police had entered JU — in September 2014 — the campus erupted in waves of protest that almost shut down the university for more than three months and ended in the then VC’s resignation.

Supriyo arrived on the campus around 2.45pm to attend a discussion on “Governance in Post-Independent India” and a freshers’ welcome, both organised by the ABVP, at KP Basu Memorial Hall.

Das, accompanied by pro-VCs Pradip Ghosh and Chiranjeeb Bhattacharya, arrived outside the venue around 3pm, after students had blocked Supriyo’s way in an attempt to prevent his entry into the hall.

“Had you come earlier, this situation wouldn’t have happened. You are coming now when the situation has escalated. You allowed this to happen,” a furious Supriyo told the VC.

Das requested Supriyo to accompany him to his office. “Mr Minister, please come with me. When matters calm down, we will bring you here again,” Das told Babul.

But the BJP leader refused to move. “I was bodily harmed and I would go away from here? Why? I won’t go anywhere. I am not a coward that I will go away,” Babul replied.

A university official was then seen requesting Supriyo to go to VC’s office. He said since the VC and the pro-VCs were sorry for what happened, Babul should accompany them.

Das then stayed back with Supriyo. He kept requesting the students to let the minister enter the auditorium. But the students stuck to their stand that they would not allow someone from the BJP to speak on their campus.

Supriyo made another attempt at entering the auditorium but students sat in front of his car. He succeeded in this third attempt, around 4.05pm, amidst a lot of scuffle. Supriyo’s guards and some university officials created a passage for him to enter the venue.

Das left after Supriyo managed to get in.

Supriyo was inside the auditorium for about 40 minutes. In his speech he said the ABVP’s base was increasing at JU and commended the ABVP supporters for staying calm during the siege outside.

But trouble started again when Supriyo was about to leave the auditorium, with students preventing him from coming out. The minister called the VC over the phone, who came to the protest site soon.

The VC and other university officials and the minister went inside a laboratory on the ground floor of the building, where the hall is located on the first floor. Officials who were present inside said Supriyo asked Das to put in his papers there.