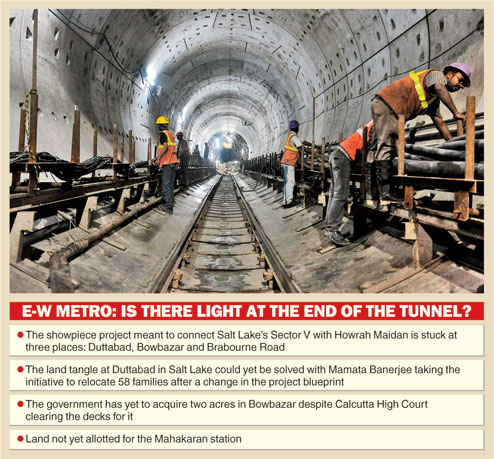 SANJAY MANDAL AND SUBHAJOY ROY Seven Projects Meant To Change The Face Of Calcutta Are Entangled In A Web Of Land Politics And Pandering. Metro Explores The Tunnel Vision   |     |   Published 11.07.13, 12:00 AM

Seven projects meant to change the face of Calcutta are entangled in a web of land politics and pandering. Metro explores the tunnel vision

Cities across India are fast transforming into better places to live in but Calcutta is struggling to get a bridge built here or a Metro running there.

Delhi had built 190km of Metro rail tracks crisscrossing the city in less than 15 years, the first phase of 65km being completed three years ahead of schedule in 2006.

In Calcutta, four Metro projects have been derailed by “local problems” linked to land in some way or the other. Work on two flyovers has been stalled for the same reason.

On Wednesday, junior rail minister Adhir Chowdhury expressed disappointment that only 27km of Metro tracks had been built in the city since the 1980s.

The state government this week held out hope for the obstacle-ridden Metro projects by agreeing to remove encroachments holding up one of them at the earliest. Chief minister Mamata Banerjee has convened a multi-agency meeting on July 17 to chart the course of action.

Metro draws up a status report on infrastructure projects in “no-man’s land”.

Land lock: At Duttabad in Salt Lake, settlers have held up work on 12 piers along a 365-metre stretch. The government has finally agreed to relocate them after a stand-off since 2009. Two acres in Bowbazar haven’t been acquired yet and land for the proposed Mahakaran station on Brabourne Road hasn’t been handed over.

Political pandering: Calcutta High Court has cleared the decks for the acquisition of land in Bowbazar but the state government seems reluctant to do so. The alignment of the underground tracks from Howrah Maidan to Central hasn’t been finalised because the government won’t acquire land earmarked in the original plan.

Pullout and compensation claim: Gammon has pulled out of the Duttabad stretch and the invitation for fresh bids has had to be extended by a month after a solitary firm responded to the tender notice. Afcons, which has been contracted to build tunnels between Howrah Maidan and Central through the Hooghly, has sought Rs 257 crore in compensation from the Kolkata Metro Railway Corporation for the delay.

8.14km flyover between Parama island on the Bypass and Park Circus

Land lock: The Calcutta Metropolitan Development Authority failed to hand over land at several sites to construction company HCC within the deadline.

Compensation claim: HCC has asked for Rs 226 crore in compensation for cost escalation caused by the delay in providing land. A committee headed by PWD secretary Indevar Pandey will examine HCC’s claim and decide how much the state government should pay or whether a fresh tender should be floated to complete the remaining work.

Percentage of work done: 62.60 till April

Land lock: Route alignment between Mominpur and BBD Bag yet to be finalised because land hasn’t been made available at several points along the 9km stretch. Land is also an issue in the Maidan area. All the proposed stations up to Taratala along with the maintenance depot in Joka are stuck for the same reason.

Decision delay: At Joka, a 25-hectare plot meant for the proposed maintenance depot and acquired by the Rail Vikas Nigam Ltd still houses 166 families who haven’t been rehabilitated by the state government. Stations between Joka and Taratala can’t be built until the Calcutta Municipal Corporation shifts drainage and water pipes. The alignment between Mominpur and BBD Bag hasn’t been finalised apparently because the mint in Taratala overlaps that stretch. The Calcutta Port Trust hasn’t handed over land and the defence ministry isn’t granting permission to build tracks through the Maidan.

Land lock: Encroachments along two stretches near Madhyamgram and Durganagar.

Lack of interest at Writers’: State government bothered little about the need to relocate the settlers.

Peeve and pullout: L&T has withdrawn men and machinery from the project site near Madhyamgram and possibly won’t return until land is made available. It has also sought compensation for the delay.

Lack of interest at Writers’: The project has tripped on a redundant 12.5km water pipeline that the Trinamul-run CMC is yet to discard despite signing a memorandum of understanding with the railways in October 2011. The CMC was supposed to hand over the old pipeline along BT Road that runs 12.5km from the Dunlop crossing till Barrackpore, by August 2012. Almost eight months have passed since the Tallah-Palta pipeline that replaced the old one was inaugurated by chief minister Mamata Banerjee but the railways is still waiting for the handover.

Also, around 500 families that have encroached on land near Dakshineswar are yet to be removed by the state government.

Land lock: The CMC has promised to hand over land on a crucial stretch near the Parama island but permission is awaited from several other agencies on other stretches . A water body near New Garia station where three to four pillars have to be built is yet to be handed over to railways as the case is pending in court.

Lack of interest at Writers’: The CMC has yet to give formal clearance to the Rail Vikas Nigam Ltd along EM Bypass near Parama island. After sitting on the NOC (no-objection certificate) since December, mayor Sovan Chatterjee assured Metro on Tuesday it would be given “immediately”. The line needs to be diverted at this stretch from the centre of the Bypass because of the Parama island flyover.

Lack of interest at Writers’: Removal of underground utility lines like water, electricity and telephone yet to be done.

Who do you blame for the infrastructure impasse? Tell ttmetro@abpmail.com