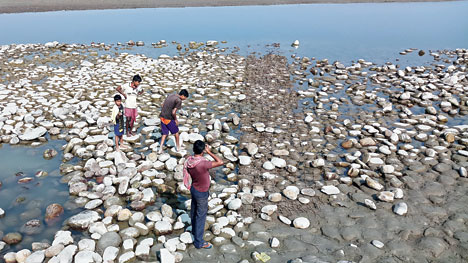 Jalpaiguri: Hundreds of dead fish have been seen floating in a stretch of the Teesta in Jalpaiguri over the past two days.

A probe has been ordered amid suspicion that the water in the Mondalghat area along a 2km stretch of the river might have been poisoned.

As The Telegraph visited the spot, around 12km from Jalpaiguri town, on Tuesday, it was found that fish like "baim" (tire track eel), "taki" (spotted snakehead), "boal" (Wallago), "boroli" (Barred baril), "bata" (Bata) and some other species were either floating on the river's surface or had washed up on the bank.

A section of locals were seen collecting the fish. "We have seen the dead fish since Monday morning and even on Tuesday. Some people here have collected around 45 to 50 kg of fish. We have no idea how it happened," said Mintu Das, a fisherman residing at Gomostapara in Mondalghat, located close to the river.

Das and some other fishermen however, did not collect the fish. "We suspect some people have put insecticides or other poison in the water, which has left the fish dead. Common fishermen like us will be without our livelihoods because of such acts," Jainul Haque, another fisherman, said, adding crabs too had floated up.

Ranjit Roy, a local resident, said some people had sold some of the dead fish. "The administration should see that those fish are not sold. It can lead to severe health hazards from poisoning."

Earlier, in 2011 and 2015, similar incidents had occurred in Karala, a rivulet flowing through Jalpaiguri town and merging at the Teesta. It was learnt that insecticides were put in the river water to catch fish. Also, poison was mixed in the water of Teesta on December 2012, which had left several fish dead.

"When the Karala water got polluted, additional water had to be brought in from Teesta to purify it. It also took several months to restore ecological balance of the river," a Jalpaiguri resident said.

As the news spread, officials of fisheries department reached the spot. They collected samples of dead fish and water.

"We will examine the samples to find out what has led to the (latest) incident. Our officers are also visiting the local markets to aware people and to see that such fish are not sold," Ashish Saha, the deputy director of fisheries here, said.

They however, are yet to assess the quantity of fish which have died due to suspected poisoning.

The district administration has started an inquiry. "We are conducting an inquiry to find out why the river water got polluted. Those responsible will be identified," said Rachna Bhagat, DM, Jalpaiguri.