Local sources said the hailstorm continued for over an hour during the evening and paralysed normal life, causing damages to properties and crops 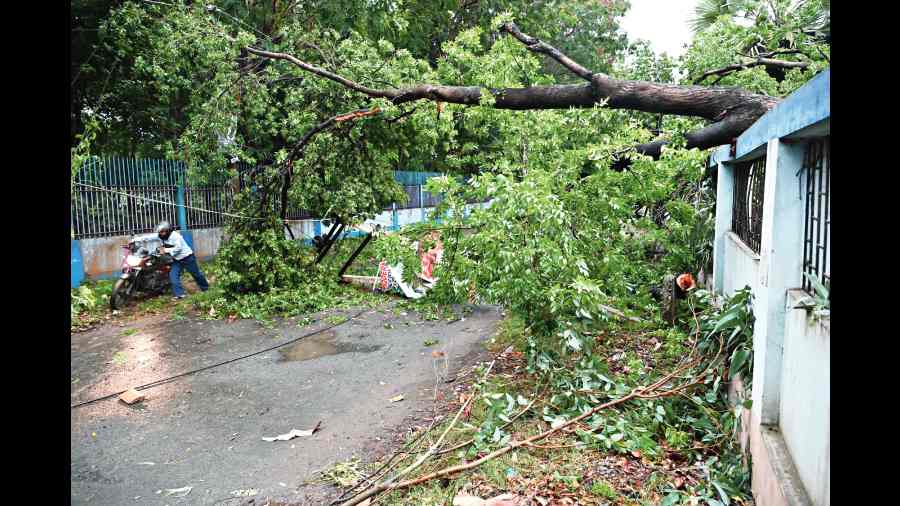 Two elderly women were killed in Nadia and North 24-Parganas during a hailstorm that lashed several areas of the two neighbouring districts on Saturday night.

Local sources said in both the districts, the hailstorm continued for over an hour during the evening and paralysed normal life, causing damages to properties, crops, and horticulture produces. A vast area under Tehatta sub-division in Nadia and Basirhat sub-division in North 24-Parganas district was worst hit by the hailstorm.

In Nadia's Karimpur, Laxmi Sarkar, 62, was electrocuted after she was entangled in a live wire of a power supply connection snapped after a branch of the tree fell on it.

The elderly woman was collecting mangoes when the hailstorm lashed the area. She was rushed to Karimpur hospital where an attending doctor declared her dead.

In North 24-Parganas, the Sandeshkhali block under the Basirhat subdivision suffered maximum damage due to the Saturday evening hailstorm.

In Khulna village of Sandeshkhali, Namita Mondal, 56, was killed when a wall of a thatched hut fell on her during the hailstorm.

Two other members of her family suffered injuries in the incident. Her neighbours rushed in and took her to a local rural hospital where she was declared dead.

Preliminary reports indicate that in both the districts over a few hundred houses collapsed rendering several families homeless. Officials in both the district administration said that jute plants suffered major damage, apart from banana and green vegetables.

In Nadia, the Tehatta sub-division suffered huge damage to crops, while two blocks of Basirhat and Sandeshkhali in North 24-Parganas suffered similar damages.

"We have begun an assessment of loss and instructed the block agriculture development officials to contact the affected farmers to help them to get compensation," an officer of the agricultural department in Nadia said.

In Hooghly’s Serampore, Sunil Nath, 32, died when a coconut tree came crashing down on him under the impact of the hailstorm late on Saturday evening. Nath was gathering mangoes when the accident took place. He died on the spot and the Serampore police took him to the hospital when Nath was declared dead.

In Burdwan on Saturday, Sheikh Alishan, 14, was killed when a tree fell on him at the town’s Rajabagan Traffic Colony.