From the surface, a mixture of water, cement and sand, known as grout, is being injected into the tunnel 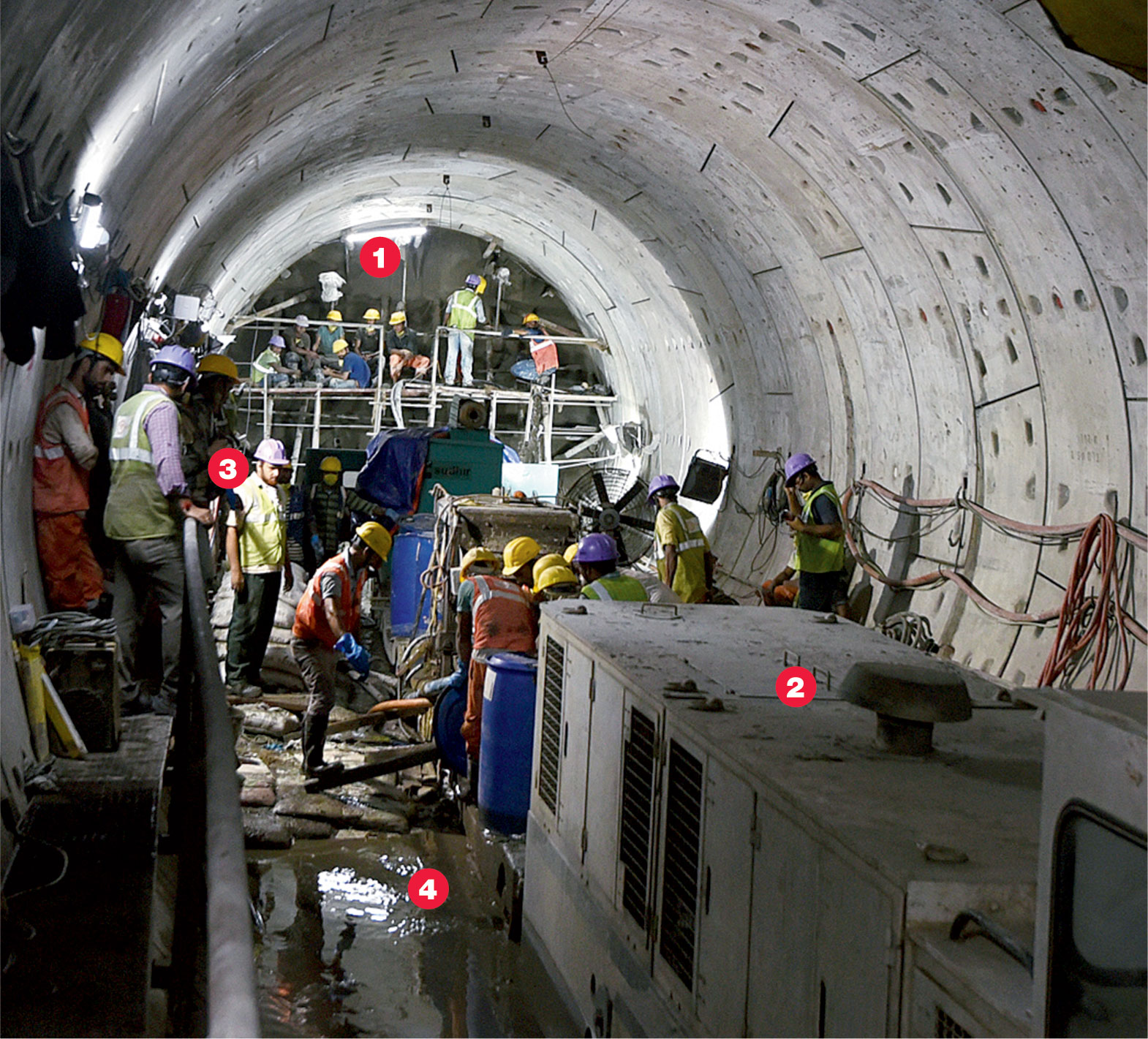 Two barriers have been set up inside the tunnel to prevent water from flooding the entire stretch of the tunnel till Esplanade. (Refer to chart)
Picture by Pradip Sanyal
Subhankar Chowdhury   |   Calcutta   |   Published 03.09.19, 09:58 PM

Steel sheets have been installed in the flooded East-West Metro tunnel in Bowbazar to prevent the accumulated water from spreading and further damage to buildings.

Metro went 17 metres underground, into the tunnel where the boring machine had hit a pocket of sand acquifer — water-bearing sand — on Saturday afternoon, resulting in damage to at least 52 buildings and evacuation of more than 500 people.

Engineers said water was continuously seeping from two sides of the tunnel on a 90-metre stretch below the area where buildings have suffered damage because of soil subsidence.

Metro entered the tunnel at Esplanade and walked through it for one-and-a-half km, till a point around 70 metres from the damaged portion.

The 16.5km East-West Metro will stretch from Sector V till Howrah Maidan and will run under the Hooghly. In the first phase, likely to be unveiled around Durga Puja, trains will run between Sector V and the Salt Lake stadium, a distance of around 5.5km.

Officials of Kolkata Metro Rail Corporation (KMRC), the implementing agency of East-West Metro, said they were trying to cut off the affected portion from the rest of the tunnel by placing steel sheets so that the water seeping in could not

“More buildings will be damaged if we fail to contain the water,” said a KMRC official.

Two steel barriers have been erected at 3 metres from each other. The tunnel-boring machine was lying about 2.5 metres from the barrier on the Sealdah side.

Small wagons were carrying a mixture of concrete, fibre and sodium silicate, which was being placed into the gaps in the barriers. The process of pneumatically projecting the mixture at a high velocity through a nozzle is called shotcrete.

“The force of spraying in shotcrete leads to compaction of the concrete, which then forms layers of solid blocks of required thickness,” a KMRC engineer said.

However, this is only one part of the firefighting.

From the surface, a mixture of water, cement and sand, known as grout, is being injected into the tunnel.

“Grouting is being done in the roof of the tunnel between the two steel barriers, above the accumulated water. The grout is being used to block the portions through which water is seeping. Grouting is essential to protect the tunnel and also subsidence,” the engineer said.

Water was being drained out using suction pumps as the level rose following the installation of the steel barriers.

KMRC officials said this was the only way to resolve the crisis. “The exercise has to continue for at least 48 hours from Tuesday evening,” an official said.

KMRC has brought in international tunnel experts to tackle the problem.

South African engineer Paul Verrall, who had supervised the boring of the twin tunnels of East-West Metro between Howrah Maidan and Esplanade, is monitoring the salvage operation.

Sources said Verrall, who has burrowed tunnels under heritage buildings in Greece, Turkey and Egypt, had suggested intensive grouting from all sides. “Verrall and other experts have said this is the only way to tackle the situation,” said a KMRC official.

But before that many buildings could collapse. A number of structures in Durga Pituri Lane and Syakrapara Lane, off BB Ganguly Street, have tilted.

“Uneven subsidence is causing some buildings to collapse like house of cards. The subsidence will continue till the leak is plugged,” an engineer of the Calcutta Municipal Corporation said.

“The buildings are tilting towards the side where there is more subsidence. This is causing cracks in the structures and widening of the cracks that have already developed,” the engineer said.

Some of the buildings have sunk almost 250mm, he said.

One of the buildings — 13A Durga Pituri Lane — collapsed on Tuesday. This was among the 11 buildings that KMRC had said needed to be pulled down after the cracks appeared. The civic body, however, has advised against immediate demolition of any building as the lives of demolition personnel would be at risk.

“Subsidence is on. Till the subsidence stops, no demolition should start. If the buildings are pulled down now, the workers may get trapped,” a civic engineer said.

Representatives of the KMRC, CMC and the disaster management group will inspect the affected buildings again on Wednesday morning and decide whether the residents could be allowed to enter. Residents are keen on entering their homes at least once to take out the necessary items.

“Only one member of each family will be let in if engineers feel it is safe to enter the buildings. If they decide the buildings could collapse any moment, no one will be allowed to enter,” an official said.

“Thirty buildings have been evacuated and the residents of 22 more will be relocated soon. The number can rise because subsidence is spreading,” the CMC engineer said.