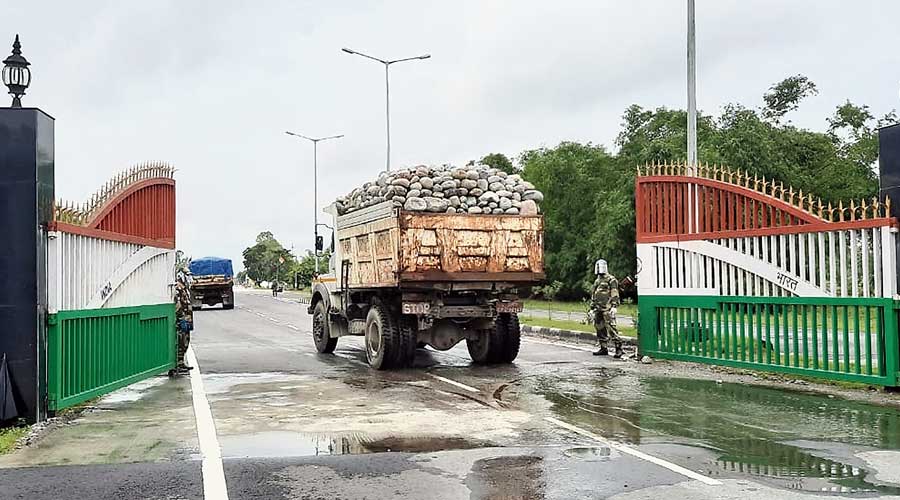 A truck heading for Bangladesh through Fulbari on the southern end of Siliguri.
File picture
Avijit Sinha, Subhasish Chaudhuri   |   Siliguri, Nadia   |   Published 09.02.22, 02:39 AM

The state transport department has announced the takeover of all parking lots run by local bodies at nine land ports in Bengal to streamline the movement of export-bound cargo and ensure that parking fees reach the state exchequer.

The department has also announced that international truck terminuses would be built on those sites.

The locations for the proposed truck terminuses are Petrapole, Bongaon and Ghojadanga (North 24-Parganas), Changrabandha (Cooch Behar), Fulbari (Jalpaiguri), Hilli (South Dinajpur) and Mahadipur (Malda), along the India-Bangladesh border, and Jaigaon (Alipurduar) on the India-Bhutan border and Panitanki (Darjeeling) on the India-Nepal border.

The decision to take over the parking lots was made at the state-level administrative review meeting chaired by chief minister Mamata Banerjee at Netaji Indoor Stadium in Calcutta on February 3.

There, Mamata had expressed her disgruntlement at the way these parking lots were run and hinted that some people were minting money from these facilities at the expense of the state exchequer. She had instructed state transport minister Firhad Hakim and his department to take over these parking areas within February 7.

Accordingly, on Monday, Rajesh Kumar Sinha, the principal secretary of the department, issued a notification that all such land used for parking by various local bodies will be taken over by the department.

“The state government wants to maintain transparency in the entire cargo movement and parking facility. Also, truck terminals at the border with comprehensive facilities will ease traffic congestion, an issue often flagged by exporters and transporters,” said a state government official.

The notification also says no parking space can be opened within 15km from the international border without permission of the transport department and the district magistrate concerned.

The parking fees of trucks of varying capacities have also been mentioned. They from Rs 150 to Rs 400 for the first 24 hours of parking, followed by an hourly parking rate that ranges from Rs 10 to Rs 50. All fees collected from these locations would be deposited in the state exchequer.

“It is evident that the state wants to use it as yet another source for revenue earnings, while expediting the movement of trucks at the border and by providing amenities to the truck drivers at the terminals,” the official added.

The exporters, as well as officials of BSF and the Land Port Authority of India have welcomed the state government's decision.

“We are hopeful that this initiative of the state will bring transparency in clearance of export bound vehicles,” said an exporter in Petrapole.