Stage set for Jatra spotlight on citizenship regime in Calcutta 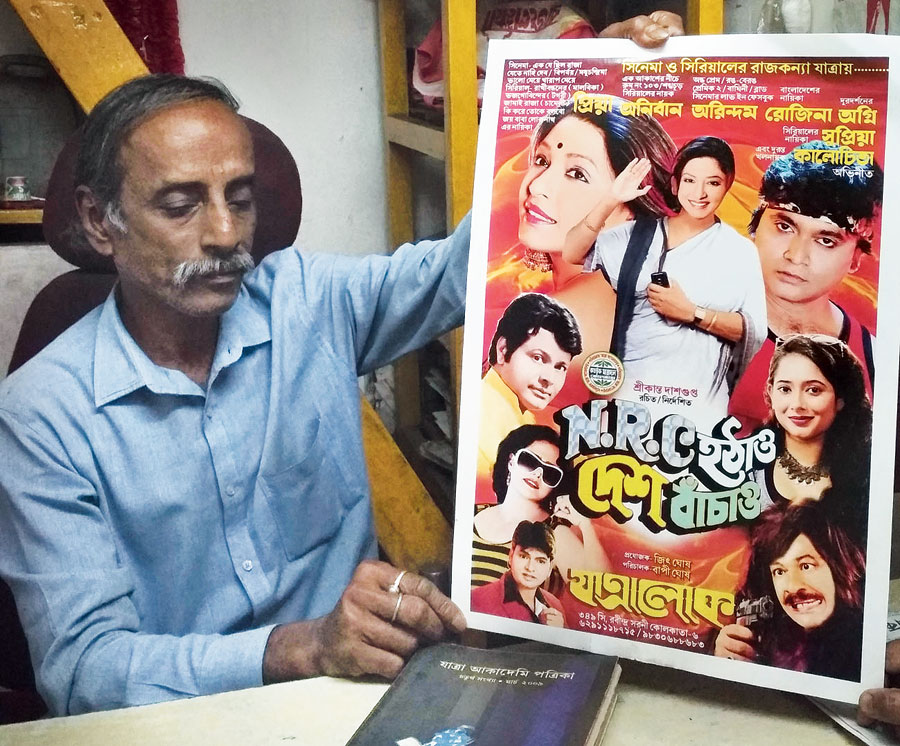 Fears about the new citizenship matrix have reached the city’s jatrapara.

One of the many posters dotting the walls of Chitpore reads “NRC Hatao, Desh Bachao (Repeal NRC, Save the Country)”.

The poster is pasted outside the wall of the office of Anandalok, one of the many operas in the neighbourhood.

“The posters are out but the play is still being scripted,” said an official of Anandalok, the only man in the small office on Thursday.

Most of the crew was away on Sagar Island to stage another play, Bekar Swamir Loafer Bou (Jobless Husband’s Loafer Wife), which has already had over 70 shows this season.

Jatra is a popular rural Bengali theatre form bordering on the opera, often melodramatic and colourful. Large stages are set up in the open. The audience ranges from a few thousand to many, according to the scale of the organisers.

Chitpore, the city’s official jatrapara, has several offices — some glitzy and some shabby, lining the stretch.

The Anandalok group is guarded about the new play. “We will tell a story. It will have good people and bad people. There is going to be a message of harmony and unity,” Bapi Ghosh, the owner, told The Telegraph over phone from Sagar Island.

The poster mentions Srikanta Dasgupta as “writer/director”. Ghosh declined to share his number and said he has been briefed that the play “should not be too political”.

“Thousands of people come to watch our plays. They are from different religion, caste and creed. There is no discrimination in the audience. That is how we want people to live their lives,” Ghosh said.

“The fear and anxiety regarding the citizenship exercise is real and palpable in villages. We want to mirror that fear. But this is not for or against any political party. The play will not name any political organisation. I cannot say anything more now. Let the play be staged first,” he told Metro.

Khokon Porel, the manager of the group, repeatedly told The Telegraph: “Please don’t politicise the play. It will speak of the fears and struggles of ordinary, poor people”.

Topical jatras are not new. Saddam Hussein, after his hanging, was the subject of many jatras. Phansir Manche Saddam (Saddam at the Gallows) hailed the Iraqi leader as a martyr fighting for his country and nailed George Bush as the villain stifling the voice of justice.

The hanging of the rape and murder convict Dhananjoy Chattopadhyay, too, became the subject of a jatra.

Chief minister Mamata Banerjee has herself been the focus of multiple plays like Banglar Baghini (Bengal’s Tigress) and Banglar Agnikanya (Bengal’s Fiery Daughter),

“I appeal to all of you to create a mass movement against NRC and CAA... Jatra upholds the society,” Mamata had said at the inauguration of Jatra Utsav in Barasat on January 9.

A figure in a blue-bordered white sari is at the centre of the poster.