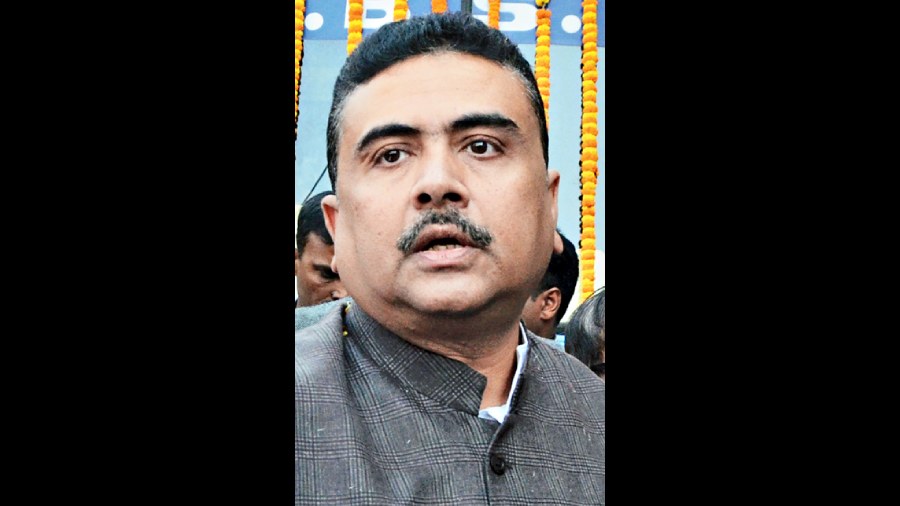 Speaker Biman Banerjee on Wednesday warned the leader of the Opposition, Suvendu Adhikari, against using “unconstitutional andinsulting” language in the Assembly.

Banerjee made the observation after Adhikari and other BJP MLAs attacked Trinamul Congress lawmakers for being “corrupt and dishonest”.

“I am warning the leader of the Opposition. Such baseless allegations cannot be made in the House.... The language used is not only unconstitutional, but insulting as well,” Banerjee said after a verbal altercation broke out between the treasury and Opposition benches.

While Adhikari wasn’t present in the House during the Speaker’s rebuttal, Banerjee conveyed the message through the BJP’s chief whip Manoj Tigga.

The BJP has been accusingTrinamul of dishonesty ever since a few ruling party leaders and ministers were arrested in corruption cases. Bringing the issue to the House on Wednesday, BJP lawmakers, under Adhikari’s leadership, raised slogans accusingTrinamul leaders of corruption.

The sloganeering started shortly after chief minister Mamata Banerjee finished addressing the House on the increasing prices of fertilisers.

According to Adhikari, the hike in the prices is a result of fertilisers being sold on the black market under the supervision of Trinamul leaders. He then went on to allege that allTrinamul leaders were corrupt.

Replying to Adhikari’sallegations, minister FirhadHakim said it was unfair to accuse everyone in Trinamul of being corrupt.

Without naming Partha Chatterjee, Hakim said just because “one former minister” had committed a wrong didn’t mean everyone in Trinamulwas corrupt.

“No one supports him(Chatterjee).... But you cannot accuse us all (of corruption). We are human beings too, there is a limit to our endurance,” Hakim said.

Chatterjee, a former state education minister, had been arrested by the CBI for his alleged involvement in a recruitment scam.

BJP’s Madarihat MLA, Tigga, said his party didn’t need to take lessons from people who were involved in vandalising the House. He was referring to an incident in 2006 when Trinamul was in the Opposition and its MLAs had vandalised the furniture of the House.

“I remember that the same minister who is behind bars today used to give us lessons on using sober language in the House,” Tigga said.