Sons to tune in with fathers at music fest

Three father-son duos will perform in the 66th edition of The Dover Lane Music Conference, partnered by Desh, at Nazrul Mancha this month. 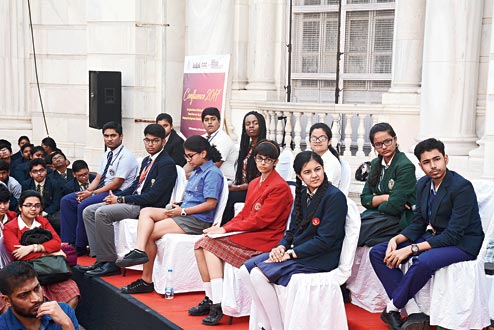 Calcutta: Three father-son duos will perform in the 66th edition of The Dover Lane Music Conference, partnered by Desh, at Nazrul Mancha this month.

The conference will be inaugurated by vocalist Chhannulal Mishra from Varanasi on January 22 and go on till January 25. Mishra, a Padma Bhushan, will also be conferred the Sangeet Samman, 2018, during the event.

Three young musicians will make their debut in company of their illustrious fathers on the violin, sitar and mohan veena.

"In this edition of the conference, we will have L. Subramaniam and his son Ambi Subramaniam playing the violin together on January 23, Shahid Parvez Khan and his son Shakir Khan on the sitar the next day and Vishwa Mohan Bhatt and his son Salil Bhatt playing the mohan veena. It would be a great moment for all the youngsters," Bappa Sen, general secretary, The Dover Lane Music Conference, said at an interaction ahead of the event on Wednesday.

Almost 40 per cent of the performers at this year's conference are debutants at Dover Lane and - a "conscious effort" by the organisers to promote fresh talent.

While three of the first- timers at the conference - Indrajit Roy-Chowdhury, Matyas Wolter and Jonathan Mayer of the Subroto Trinity - will be flying down from the US and Germany, others like vocalist Gauri Pathare of the Gwalior and Jaipur gharanas will come down from Mumbai.

Pathare had lent vocal support to her guru Padma Talwalkar at the Dover Lane conference two decades ago. "All the memories are coming flooding back. This will be an emotional concert for me," Pathare said.

Among the attractions this year are two uncommon duets. The first, of flute and saxophone by Ronu Majumdar and Kadri Gopalnath, and the second, of santoor and Carnatic violin by Tarun Bhattacharya and Mysore M. Manjunath.

The organisers said the effort this year was to accommodate a wide range of instruments for variety.

Since the opening day of the conference, January 22, coincides with Saraswati Puja, the conference will be inaugurated in the evening and not the morning.

"We had revived the tradition of inaugurating the conference in the morning last year after 15 years. But we changed the schedule this year because no artist would want to perform on the morning of Saraswati Puja," Sen said.

The opening day of the conference has been dedicated to the memory of Girija Devi, who passed away on October 24 last year. "Girija Devi belonged to the Benaras gharana. To honour her we have two performers from the same gharana - Rajendra Prasanna and Troupe playing shehnai and Chhannulal Mishra (vocal) - that day," Sen said. The second and third days of the conference are dedicated to the memory of Subroto Roy Chowdhury and Kishori Amonkar respectively while the fourth and last day is dedicated to two committee members.