Dismissing her remarks, Trinamul reaffirmed that the NRC exercise would not be replicated in Bengal 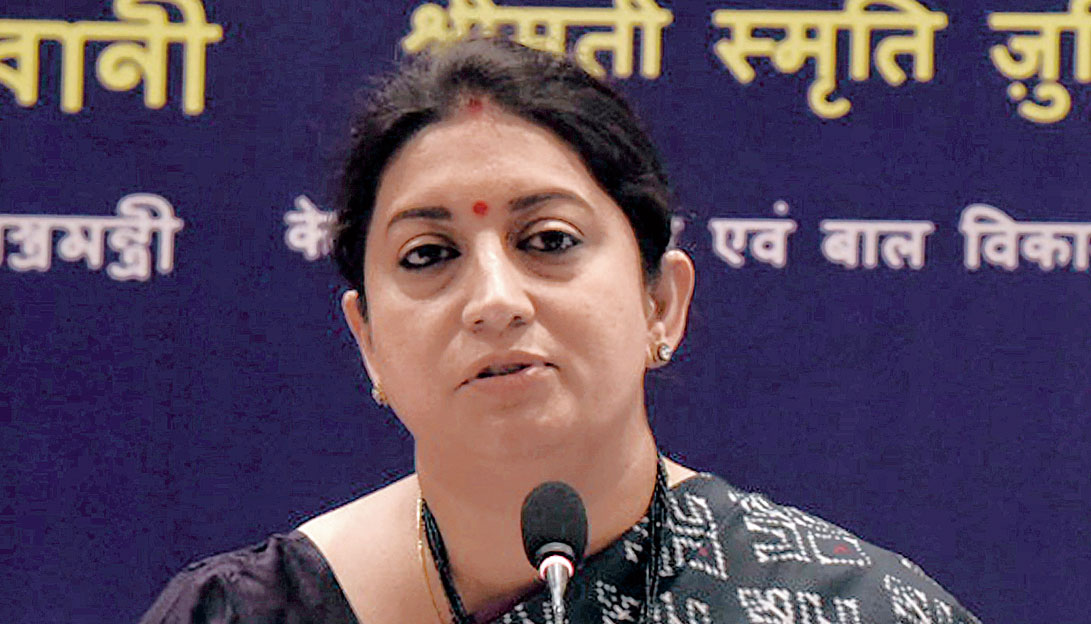 Union minister Smriti Irani on Tuesday lambasted chief minister Mamata Banerjee for opposing the National Register of Citizens (NRC), asserting the Narendra Modi government was committed to protecting the rights of every citizen and that illegal immigrants would be “dealt with accordingly”.

Addressing a news conference here on the completion of 100 days of the second term of the Modi government, Irani said there would be no compromise on the question of infiltrators.

“The BJP is dedicated to protecting the interests and rights of Indians. Those who have illegally entered the country will be dealt with accordingly…. No Indian will be left out,” said the Union women and child development minister, echoing views expressed by Union home minister Amit Shah in Assam on Monday.

Irani recalled that Mamata had hit the streets during her days in the Opposition demanding proper identity verification for voting. Mamata should remember that she observes “Martyrs’ Day” on July 21 every year, Irani said. On July 21, 1993, Mamata — then a Congress leader – was leading a rally with the demand when police firing killed 13 Youth Congress supporters.

“She, as a parliamentarian then, had torn off papers and thrown them, aiming them at the Deputy Speaker in the Lok Sabha, for not allowing her to move an adjournment motion. Now she is vehemently opposing NRC,” said Irani.

Last week, Mamata had led from the front in denouncing NRC when the Bengal Assembly passed a resolution opposing the exercise in Assam. Backed by the non-BJP Opposition, Mamata had ruled out such a list in Bengal.

The resolution — introduced by Trinamul and supported by the Left and the Congress — was the first such official protest against the exercise that has kept 19 lakh people in Assam out of the final NRC.

The issue has assumed importance in Bengal not only because of the state’s geographical proximity to Assam, but also because of repeated assertions by the state and central BJP leadership that an NRC-like exercise would be carried out in Bengal.

Dismissing the remarks, Trinamul reaffirmed that NRC would not be replicated in Bengal. “Let them come here and say what they want to, (they are) trying to foment tension as part of their strategy…. NRC will not happen here. Mamata Banerjee has said so, on behalf of the state and its people,” said senior Trinamul leader and Calcutta mayor Firhad Hakim.

In Behrampore, the Congress’s leader in the Lok Sabha, Adhir Chowdhury, said the BJP was caught in a mess of its own creation in Assam over NRC. “Of the 19 lakh people left out of the final draft, 14 lakh are Hindus (the BJP has repeatedly said the exercise is aimed at ‘weeding out Muslim infiltrators’)…. What are the 19 lakh people to do? The governments — at the state and the Centre — have no answers,” Chowdhury said.

“The Centre’s ministers have said on record in Bangladesh that the NRC is an internal exercise of India and nobody would be sent to Bangladesh. Then what happens to those whose names are excluded from the list? Detention camps? Prisons? Open fields? What? The Centre has no clear policy,” Chowdhury, the Behrampore MP, said.