Highest birth rate of endangered species in one year in Darjeeling 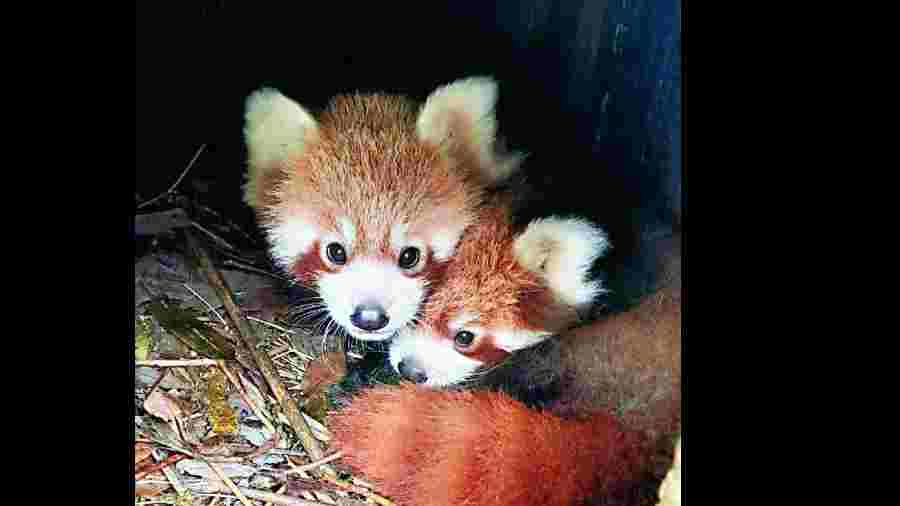 The Padmaja Naidu Himalayan Zoological Park (PNHZP) is cheering the birth of six red panda cubs that marks a high for this endangered animal in the Darjeeling zoo.

Dr Basavaraj Holeyachi, the zoo director, said: “In the last two-and-a-half months, three red pandas have given birth to six cubs, which marks the highest birth rate of red pandas in a single year at the Darjeeling zoo. The births indicate  the success in conservation breeding.”

The gender of the six cubs is as yet unknown. “Gender can be identified only after another three months. At this moment we do not want to disturb them,” said Holeyachi.

With the six newborns, the total strength of red pandas at the Darjeeling zoo stands at 29. Among the 23, who are older and whose genders are known, six are males.

With a healthy headcount, the PNHZP has drawn up plans to release three red pandas into the wild later this year,  said Holeyachi.

Early this year, the Darjeeling zoo had released four red pandas into the wild after a gap of 19 years. In the zoo, they had been named Smile, Shifu, Noel and Yeshe, and were aged between four and nine years.

Across the world, there are around 15,000 to 16,000 red pandas. The species has been listed as endangered under the IUCN red list of threatened species and Schedule I of the Indian Wildlife Protection Act, 1972.

The Darjeeling zoo started Project Red Panda in 1986 in an attempt to reintroduce captive red pandas in forests. The zoo was also the first in India to release captive-bred pandas into the wild way back in 2003. Then, two female red pandas were released into the Singalila National Park.

Before sending the animals into the wild to fend for themselves, they are first soft released in a section of the park where they are monitored and protected. This is basically done to help the animals, so far living in captivity, to acclimatise themselves to a life in the wild. This apart, prior to release, genetic analysis is  done to know the ancestry of animals so that they can be released into the wild in such a way as to prevent inbreeding.

The project is to restock red pandas in the wild. It was earlier estimated that 60-odd red pandas dwelt in Singalila and in the Neora Valley National Park but it is largely believed that numbers are dwindling.

The Darjeeling zoo is

classified as a co-ordinating zoo to breed red pandas and other animals like the Tibetan wolf, the Satyr tragopan or the crimson horned pheasant, the grey peacock pheasant, the snow leopard and the Himalayan salamander.

An animal born in a co-ordinating zoo are also exchanged with participating zoos as backup for the species in case of epidemics and ensure their healthy genetic strain.