Trinamul Congress, which has never secured the municipal board of Siliguri, tried to woo the Gorkha community in the final lap of the canvassing on Thursday 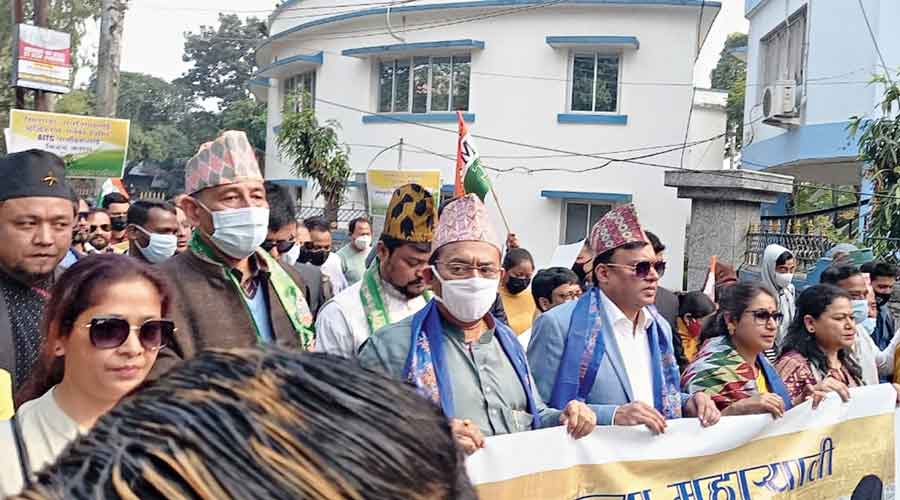 Minister Aroop Biswas with members of the Gorkha community at the rally in Siliguri on Thursday.
Passang Yolmo
Avijit Sinha   |   Siliguri   |   Published 11.02.22, 12:27 AM

The campaign for Saturday's Siliguri Municipal Corporation (SMC) elections, with four lakh voters in the civic area, wrapped up in the city on Thursday afternoon.

The Trinamul leadership, keen on the civic polls here as the party has never secured the municipal board of Siliguri, tried to woo the Gorkha community in the final lap of the campaign on Thursday.

State minister and party leader Aroop Biswas, along with a number of Trinamul functionaries, joined a mega rally named the Gorkha Ekta Maha Rally organised by the Gorkha community of the city on Thursday. The rally, with hundreds of Gorkhas, moved through prominent thoroughfares, as participants sloganeered in favour of Trinamul and Mamata Banerjee.

“The Gorkhas who live in Siliguri have hosted the rally and want Trinamul to win. They firmly believe that only our party can usher in development in this city,” Biswas said.

On Wednesday, Biswas had joined a similar march organised by members of the Matua community who live in and around Siliguri.

Minister Firhad Hakim, who was here to campaign, had addressed a meeting in a minority-dominated area of the city a couple of days back.

“Considering the demographic pattern of Siliguri, it is important for any party to win support of these communities, which is what Trinamul has tried during its campaign,” said a political observer.

A senior functionary of Trinamul here said the SMC polls was vital for them to drive home the point that the party has started reviving its support base in north Bengal, which in turn can help them secure the other municipalities where elections would be held on February 27.

“Winning the SMC polls means a positive message for our party supporters and for voters of other civic bodies. It can help us to thwart the BJP,” the party leader said.

The Left leaders, campaigning on the last day, said they can forge a post-poll alliance with Congress. They also lambasted the state ministers.“Aroop Biswas, who is a state minister, held rallies of different communities. This is unacceptable during elections. The state election commission should see to it,” said Jibesh Sarkar, convener of the Darjeeling district Left Front.

Congress and BJP candidates, including Shankar Ghosh, the BJP MLA of Siliguri, also campaigned extensively till late afternoon, urging voters to stand by them.

“The residents here will not stand by the Left, the Congress or Trinamul," said Ghosh. “People want development and have seen how the (BJP-led) Centre has focussed on the region with infrastructure work like roads and bridges,” said Ghosh.