Help us to help you, urge police 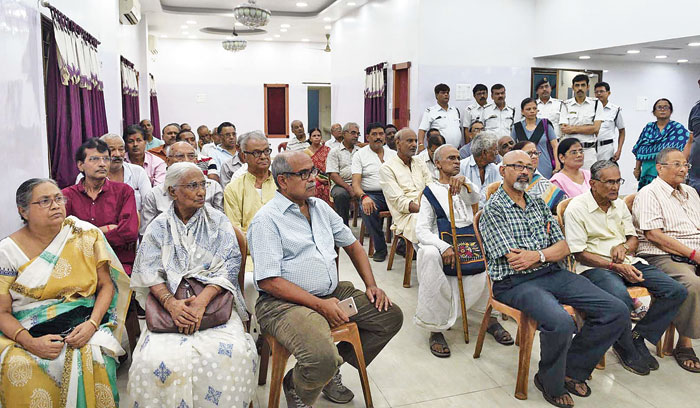 Fifty-odd senior citizens received a series of tips from police to ensure their safety.

Piyush Kundu, the officer-in-charge of Phoolbagan police station, began the interaction with the large gathering of senior citizens on Thursday evening by warning the elderly not to trust anyone.

“Stop trusting everyone turning up to visit you. I know it doesn’t sound nice. But that’s how it is,” Kundu said.

The advice came in the aftermath of three murders involving senior citizens over the last week-and-a-half across.

“Don’t open the door as soon as the bell rings,” Kundu said. “So many people keep visiting throughout the day — from the milkman, the flower guy, newspaper vendor to the domestic help. How many of you know where each of these people live?”

Elaborating on why it was not worthy trusting anyone,

The officers explained how there have been several instances where a domestic help of many years, though not directly involved in the crime, had passed on vital information to others unwittingly.

A call for show of hands yielded none. Instead, some senior citizens asked if there was any mechanism to

alert the police if they suspected a crime was imminent. Other wanted to know what if a plumber insisted on turning up with his assistant when no one else was at home.

“We would advise you to keep your valuables and large sums of cash in bank lockers,” said an officer. “If you feel you need a security cover to either withdraw or deposit big amounts and need our help to visit a bank, just call us. We would there for you.”

Lalbazar has drawn up a list of measures that officers-in-charge of police stations would have to follow over the next few days to secure the city’s most vulnerable population living alone.

Beat officers have been asked to visit homes where the elderly live along and note down their phone numbers.

“Can I call up the number and ask for an ambulance at night?” asked Anima Goswami. Officers clarified that this number was dedicated to security concerns of senior citizens.

The officers advised the elderly to install CCTVs at home, adding that the cops could help identify the spots where cameras would have to be installed.

Rita Mukherjee, a Phoolbagan resident who had so long relied on a grill gate for security, said she would now consider installing CCTVs. “I usually depend on my grill gate. If it is someone unknown, I don’t allow the visitor to step inside. I will have to think about CCTVs now.”

The hour-and-a-half-long meeting ended with seniors lauding the police and demanding that such meetings be held more frequently.

“Hopefully, we will meet soon. But before that please help us to help you lead a secured life. You will have

the numbers of beat officers. Call them in case there is any problem. Be alert,” Kundu said.

The police will hold similar meetings across the city, officers at Lalbazar said.