Police rescued three girls and two boys, aged between nine months and six years, from the custody of the institute head 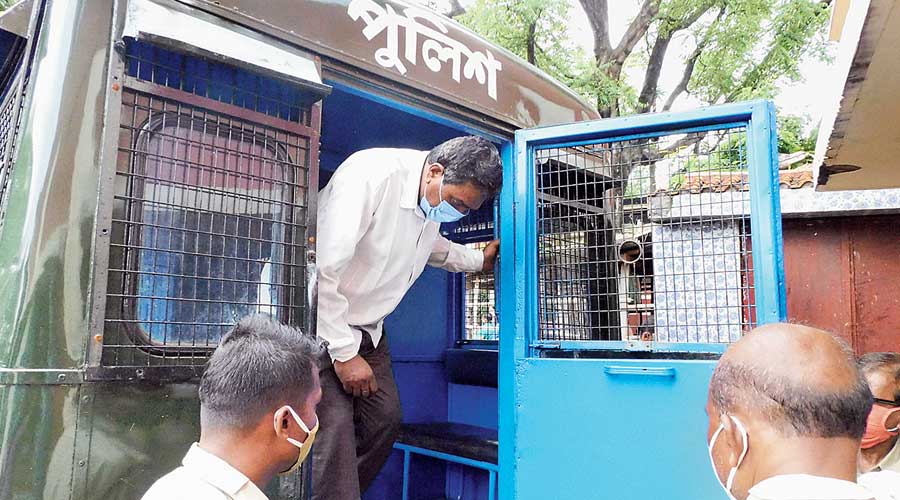 A 57-year-old principal and one of his female colleagues at a central government school in Bankura and six others were arrested on Sunday night for their alleged involvement in a child trafficking racket.

“We have arrested the principal of Jawahar Navodaya Vidyalaya, along with seven others, including a female teacher and her husband, in the child trafficking case. We have rescued five children and sent them to a government home,” said Dhritiman Sarkar, the Bankura police chief.

The police rescued three girls and two boys, aged between nine months and six years, from the custody of the principal.

On Monday, a Bankura court sent principal Kamal Kumar Rajoria and two others to police custody for five days. The five others were remanded in jail custody.

Bengal child and women welfare minister Sashi Panja tweeted a photograph of Rajoria along with BJP MP and minister of state of education Subhas Sarkar at a BJP programme.

Sarkar, however, pleaded ignorance. “It was a programme of distribution of educational stationery to students and the principal was just invited,” Sarkar said.

Police sources said, a group of villagers, including a few local Trinamul leaders, on Sunday spotted the principal and seven others trying to pack three children, who were crying, into a car.

The police have learnt that Rajoria had joined the JKV in 2017 as a principal and was living alone in his quarter on the school premises. Initially, the principal tried to argue that the children had come for admission to the school, but the villagers weren’t satisfied as admission to the school starts from class VI and informed police. He told the police that his wife also knew about the children as he kept them with him on humanitarian grounds.

“But we contacted the wife of Rajoria in Rajasthan who said she had no knowledge about such children living with her husband,” said a police officer.

Police sources said Rajoria, who is a resident of Rajasthan’s Dausa, first purchased a nine-month-old baby from a red-light area of Durgapur’s Kada Road and handed it over to Sushma Sharma, an assistant teacher of the school, who had no child. Sharma and her banker husband are among the arrested eight persons.

“Later, he brought two baby girls, aged around four and six years, and kept them at his quarter for the past few months. On Sunday evening, a woman, along with her mother and four others, came with two more children and handed them over to the principal. The principal was trying to send the new children to other places,” said a police officer.

The police said they would interrogate Rajoria to know why he would keep the children illegally and what the purpose was. “We suspect the children could be trafficked to other states and there may be many people involved in the racket,” said a police officer.

Trinamul leaders in Bankura said Rajoria was very actively associated with the BJP and took part in the campaign for the Assembly elections this year.

“The photograph along with Subhas Sarkar proves his connection with the BJP,” said a Trinamul leader.

Ananya Chakraborty, the chairperson of the West Bengal Commission for Protection of Child Rights, said she had sought a report from the Bankura district magistrate.