Sanitary pads at hand to bring girls to school 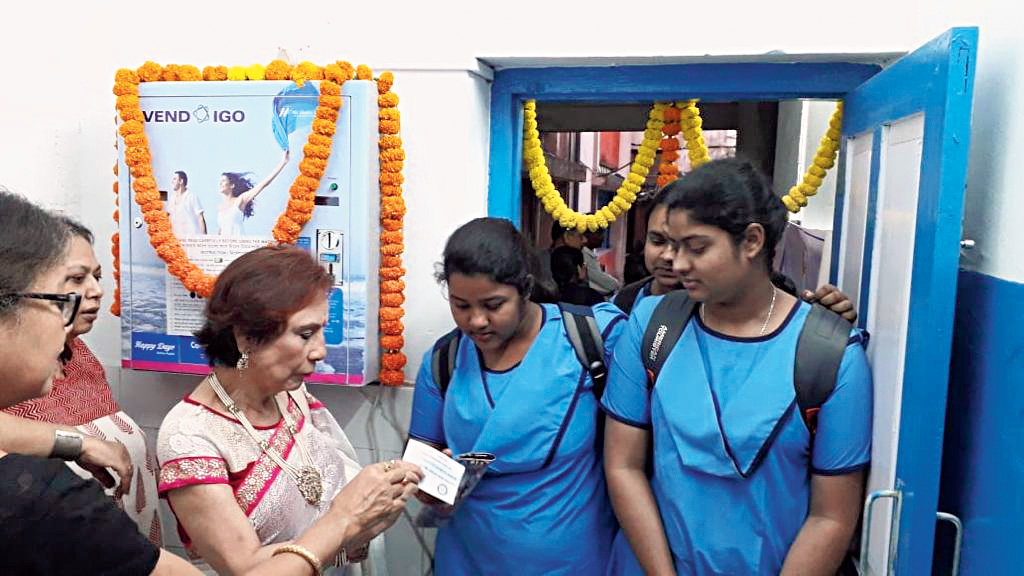 Students with a teacher at the inauguration of the sanitary napkin vending machine inside the girls’ toilet at Laban Hrad Vidyapith in AD Block.
The Telegraph picture
Tathagata Ray Chowdhury   |   Calcutta   |   Published 29.03.19, 12:26 PM

The machine, which was funded jointly by the school management and the Rotary Club of Laban Hrad, was inaugurated in the girls’ washroom. The school bore the cost of modernisation of the washroom by spending Rs 25,000 while the Rotary club gave Rs 36,000 towards the cost of the machine.

This Bengali-medium school imparts education from classes V to XII. However for classes V to X, it admits only boys. For the plus-two section it admits girls too. Teachers first felt the need to help out girls when they realised that almost every girl was skipping classes on certain dates every month. The girls were also missing out important science practical classes or class tests on those dates.

“When we asked them the reason behind their absence on certain days every month, many girls confided in us the inconvenience they face for not having a sanitary napkin handy during the days of menstruation. So we thought we should do something about it so that their attendance improves,” said school headmaster Sajal Kanti Mandal.

He added that theirs was perhaps the only government or government-sponsored school in the locality to have installed the machine.

“We need to understand that having a sanitary napkin vending machine is as important as having a toilet in any public facility. The set-up has been made completely private to ensure that girls do not feel uneasy in using the machine. It has been installed on a wall in the girls’ washroom,” said another teacher.

The Rotary Club of Laban Hrad has supplied 2,000 sanitary pads to the school as the initial instalment. The school has entered into an agreement with the club for smooth functioning of the machine. As per the agreement, the club will provide 1,500 pads free every year. Beyond that, the club will charge Rs 1.50 for every two pads. Students will get two pads for Re 1.

“It would not be a problem even if the girls do not have a Re 1 coin with them. They can approach us any time and we will give them change,” said an official at the school’s accounts office.

Girls were happy at the installation of the machine. “The machine is going to help us in many ways. Many of us suffer from irregular periods. So the menstruation dates are not the same every month. This often catches us unawares. In such situations, the machine saves our day at the school,” said Sutapa Singha, a Class XI arts student.

“Getting sanitary pads at the right time will also help us avoid infection,” said another student of Class XI, Sumedha Mandal.