Hawkers and jaywalkers are adding to the chaos 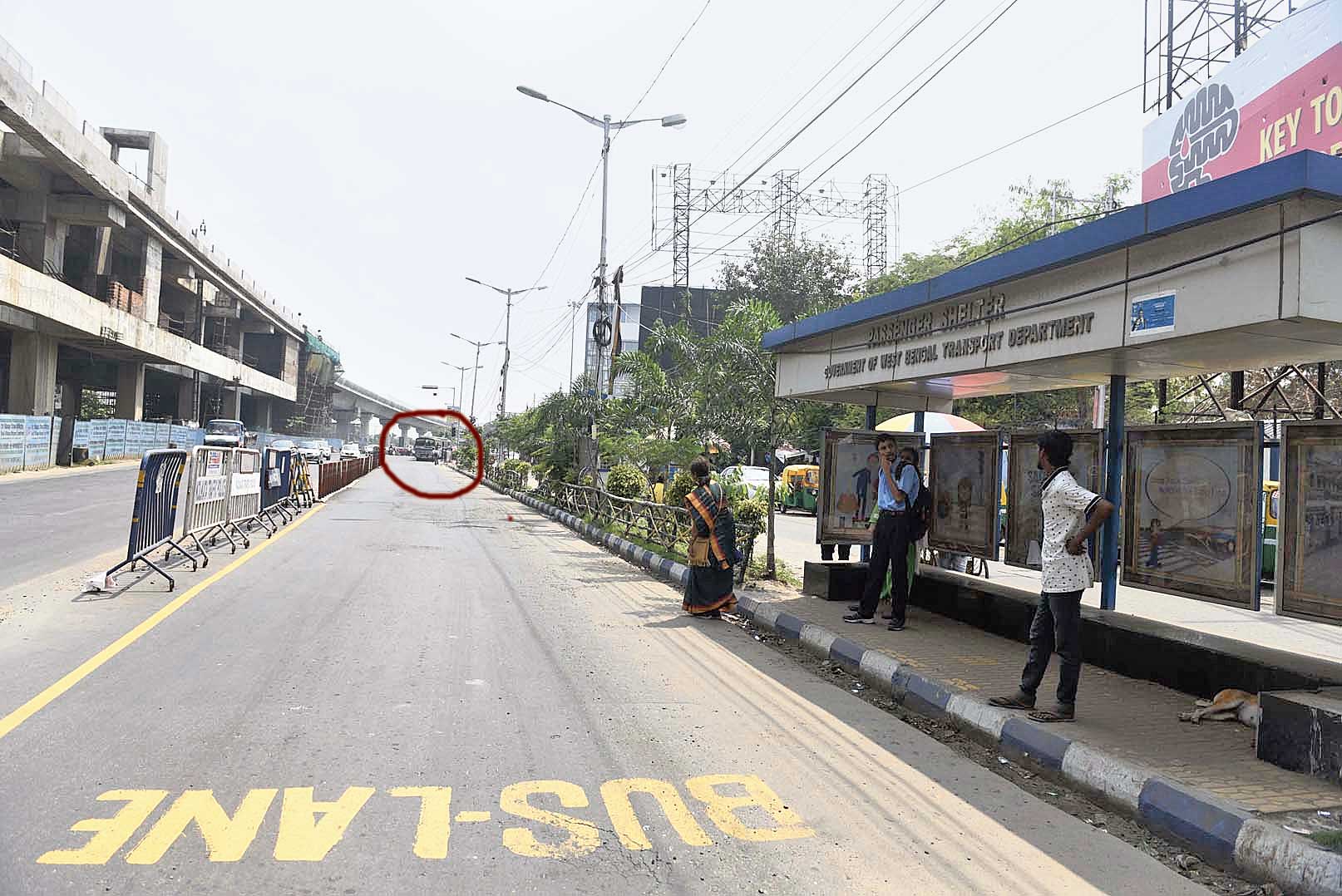 A bus picks up passengers (circled) in the middle of the road while people wait at the stop on the Science City-bound flank of the Bypass.
Picture by Gautam Bose
Snehal Sengupta   |   Calcutta   |   Published 28.03.19, 09:22 PM

Buses racing each other, picking up and dropping passengers in the middle of the road make the Ruby crossing on the Bypass and the Gariahat crossing prone to accidents.

Hawkers and jaywalkers add to the chaos.

A 58-year-old woman died on Wednesday after fracturing her skull when she fell while getting off a steep divider next to the Gariahat Chess Club and close to a moving a bus.

Metro drove down the Bypass to the Ruby crossing and the Gariahat crossing to witness law violations by buses.

Buses race to pick up passengers ahead of the designated stop near Gateway hotel on the Gariahat-bound flank of the Rashbehari connector.
Picture by Gautam Bose

There are at least four designated bus stops along the roads that lead to the Ruby crossing but bus drivers pick up and drop off passengers in the middle of the road.

The worst stretch is on the Science City-bound flank of the Bypass between the Haldirams outlet and the building of the Public Vehicles Department (PVD) in Kasba.

The designated bus stop on the Science City-bound flank is in front of the PVD building but buses stop in the middle of the Bypass after crossing the Ruby traffic signal to pick up or drop passengers.

“We have to run to catch buses every day. Often, other buses try and overtake from the left making it risky for us,” Siddharth Roy, a resident of Golf Green, said.

Last April, six passengers were injured when a state bus rammed into a civic garbage truck at the Ruby crossing.

“The bus stop is too far for us to walk there. They could have made it closer,” Subir Samanta, an IT worker, said.

People weave their way through traffic at the Gariahat crossing on Thursday.
Picture by Gautam Bose

The buses that head towards Science City, Gariahat and Garia accelerate as soon as the traffic signal turns green.

They jump lanes, putting the lives of passengers as well as those on the road at risk. Thursday was no different.

Often, when several buses wait at a signal, drivers keep revving their engines to race ahead as soon as the signal turns green to reach the next passenger spot first.

On Thursday, on the Gariahat-bound flank of the Bypass, a private bus raced to reach a clutch of passengers waiting under a tree while another bus, headed in the same direction, overtook it and stopped diagonally in the middle of the road to pick them up.

Most of the buses headed in the same direction forced smaller cars to switch lanes while they tried to overtake each other.

The bus stop in front of The Gateway Hotel had a deserted look as not a single bus stopped.

On Thursday, a government bus ignored a “No Entry” sign and entered a one-way service lane in front of the PVD building and drove towards the Ruby crossing.

A sergeant posted at the Ruby crossing said “prosecuting bus drivers rarely acted as a deterrent”.

Less than five per cent of pedestrians wait for the signal to turn red for vehicles and cross roads while vehicles keep moving, according to police records. They rarely use zebra crossings.

“Pedestrians are often responsible for the chaos,” a constable said, pointing to scores of people crossing the road while vehicles were moving. While some had earphones plugged in, many were staring at their smartphones while crossing the road.

Some raised a hand and darted across the road, dodging moving vehicles.

Buses keep blaring their horns to get pedestrians out of their way and stop wherever someone signals them to stop.

Pedestrians often shout at cops when they hold ropes to stop them from stepping on the road during rush hours, the sergeant said.

“The traffic volume is very high. Pedestrians hardly ever get a chance to cross the road; so, we have no choice but to cross the road like this,” Sumitra Bhattacharya, 27, a sales professional, said.

Every footpath in Gariahat has been taken over by hawkers, forcing pedestrians to walk on roads.

Traffic cops have created walkways for pedestrians by placing crash barriers on the road near the crossing. “We can’t ask people to use footpaths as hawkers occupy them,” an officer said.