According to sources in the Met office, it rained around 110mm in Alipurduar during the 24-hour period till 8.30am on Friday 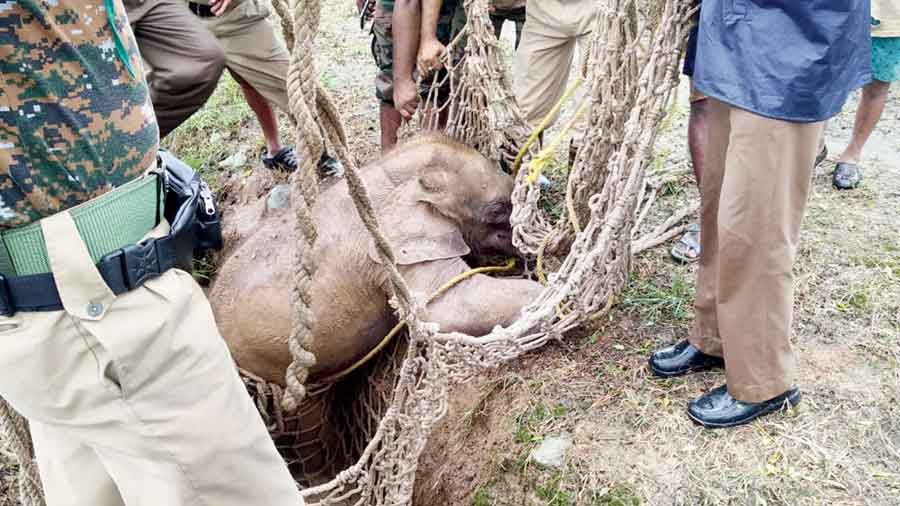 Foresters pull an elephant calf out of a swollen stream near Banarhat in Jalpaiguri district on Friday.
Biplab Basak
Our Bureau   |   Siliguri   |   Published 28.08.21, 01:58 AM

Continuous rainfall across the sub-Himalayan Bengal on Thursday and Friday triggered landslides that damaged houses and snap in road communication in the Darjeeling hills and water-logging in Siliguri.

According to administrative sources, the rain triggered minor landslides at Toongsoong in ward 14, Bhotay Dara in ward 28, Singmari (below the ropeway station) in ward 29 and in ward 9 of the Darjeeling town.

“Three houses were damaged because of rain and landslides at Kailapani, School Dara and Ghayabari in the Kurseong subdivision. Some houses were damaged at School Dara (different place) and Murmah in the Mirik subdivision. There are reports of houses being damaged at Liza Hill, Bara Pattabang and Gairigaon in the Pullbazar block (in the Darjeeling subdivision) as well. We are collecting details of the extent of the damage,” said an official.

The rainfall also led to a cave-in on NH55 near Chunabhatti of Kurseong.

“Only light vehicles are being allowed to move along the route as a portion of the road has subsided. The Sepi road that connects Srikhola in Pulbazar block and another road in Lepchakha of Badamtam panchayat and the road to Rimbik High School were damaged in the rain,” the official added. Some low lying areas of Siliguri had been under water since Thursday night. The water receded on Friday afternoon.

“There is a forecast of more showers in the next few days. We are monitoring the situation. All arrangements have been made to help people in case any fresh water-logging or flood-like situation occurs in and around the city,” an officer of the sub-divisional administration said in Siliguri.

Like Siliguri and the hills, it also rained in Alipurduar district. According to sources in the Met office, it rained around 110mm in Alipurduar during the 24-hour period till 8.30am on Friday.

Taking advantage of the torrent which kept people indoors, a gang of thieves broke into a number of shops at Newtown in Alipurduar on Thursday night.

“Altogether, they tried to break into 11 shops, including jewelleries. They could eventually burgle five shops. We are gathering details of the loot,” said a police officer.

Local people said it was raining heavily on one hand and there was a power cut in the area on the other hand when the crime was suspected to have taken place.

Thieves made an attempt to steal cash from an ATM at Samanagar in Siliguri also on Thursday night. Although the cash wasn’t lost, the machine and the CCTV cameras were damaged.

On Friday, a male elephant calf was swept away for a few metres while it was crossing a swollen stream in the Dooars.

Sources said an elephant herd had entered the Karbala tea estate near Banarhat in Jalpaiguri district from the adjoining Reti forest on Friday morning. When the calf tried to cross the stream, it lost balance and was swept away to some distance.

Foresters pulled the animal out of the water after four hours of efforts. Later in the day, they released the calf into the Reti forest where it rejoined the herd.

“We had apprehended that the herd would not accept the calf. We are happy that it has returned to the herd,” said Seema Choudhury, an honorary wildlife warden in the Bengal forest department.