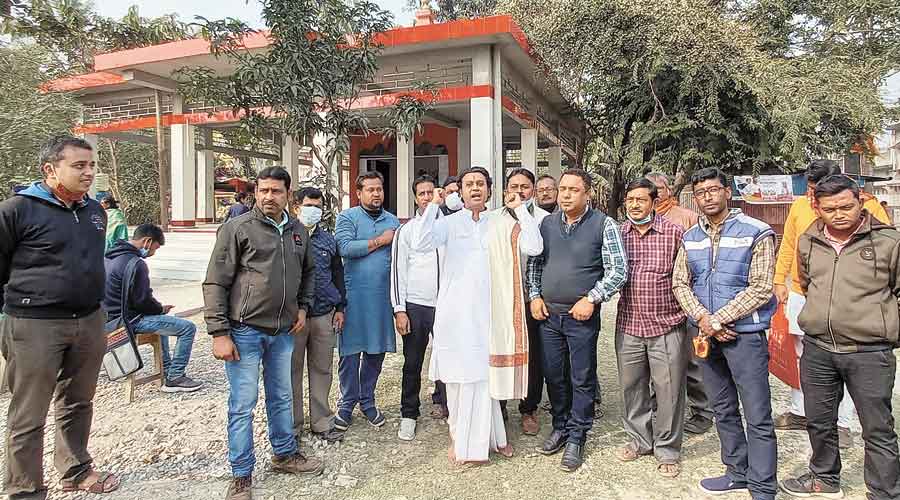 A group of Vishwa Hindu Parishad and BJP supporters on Friday in front of a temple at Dangapara in Jalpaiguri from where they initiated the collection drive
File Picture
Our Bureau   |   Siliguri/Jalpaiguri   |   Published 17.01.21, 02:18 AM

Some Trinamul leaders in north Bengal said on Saturday that they too would contribute for the Ram Mandir in Ayodhya, but added that they would send money directly to the bank account of the temple trust.

Their stand was aired a day after the Sangh parivar launched a fundraising campaign and suggested that the opportunity would be used to carry out an unofficial poll survey.

Accusing the Sangh Parivar of using religion for political dividends, K.K. Kalyani, the district Trinamul president of Jalpaiguri, said: “We, too, want to donate for the temple... But there is no reason to pay the donation to Vishwa Hindu Parishad and some other outfits that have launched a so-called drive and intend to mix religion with politics.”

The Trinamul leader’s assertion was seen as an attempt to prevent the saffron ecosystem from reaping political dividends from the temple fundraiser ahead of the crucial state polls.

“The donation should be sent directly to the official bank account of the Shri Ram Janmabhoomi Teerth Kshetra Trust formed by the Centre under the directives of the Supreme Court, and we would encourage people to do so," he added.

On Friday, the temple trust launched the nationwide funds drive — asking for Rs 10 minimum and above from people as contribution for the temple’s construction, with coupons against cash — and the VHP is mandated to implement it to continue till February 27 or Magh Purnima.

Several leaders of the saffron ecosystem had said they would use the fundraiser to assess the BJP’s poll prospects in Bengal besides an extensive outreach.

In Bengal, with elections drawing near, the fundraiser was launched with specific directives to the Sangh parivar foot soldiers that they should collect basic information of the donors.

A senior Trinamul leader in Siliguri said that they would not let the saffron ecosystem play the temple card.

“It is a temple of the common people. Why should we allow the BJP and its associates take the credit for collecting funds for the temple? We will always encourage people to donate directly through bank transfer,” he said.

Sources in Trinamul and political observers said that Bengal’s ruling party decided to take the stand primarily because of two reasons.

On one hand, Trinamul is trying to prove that it is not against the Ram temple, said a source, and on the other hand, does not intend to let the saffron camp gain leverage from this fundraiser, an observer opined.

VHP leaders, however, said that they would continue the fundraiser officially announced by the trust.

“There are many people who find it convenient to pay in cash against coupons. That is why we have launched the drive and will continue it according to schedule,” said Krishnendu Guha, a spokesperson of the VHP in Jalpaiguri.

The Jalpaiguri district Trinamul unit has constituted a task force of doctors and prominent leaders of the party to look into cases where the Swasthya Sathi free health insurance card provided by the Mamata Banerjee government is not accepted by private nursing homes. “The task force will try to resolve the problems in consultation with the state health department,” said district Trinamul president Kalyani. Party insiders said the initiative was taken to thwart the BJP that dubbed the card “useless”.