The Met office had predicted rain on all four Puja days, saying the intensity could go up on Navami and Dashami 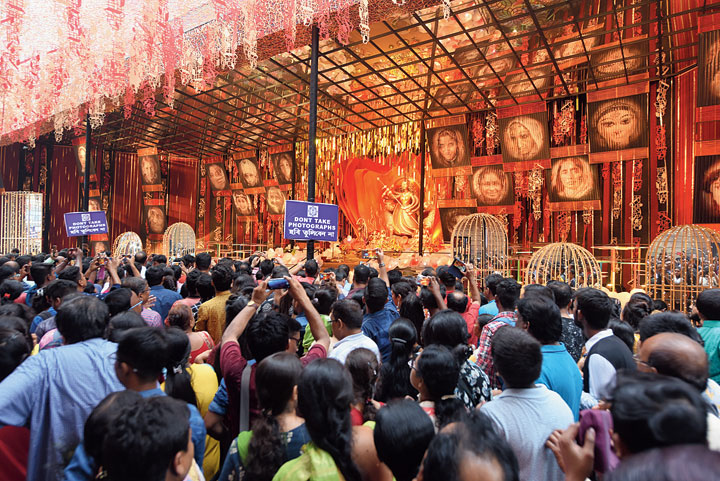 The city sweated throughout Navami but there was no rain. The sky was dark for a better part of the afternoon and the relative humidity soared, typical conditions before a round of showers, but the clouds disappeared by the evening.

Pandal-hoppers did not complain though. From Nalin Sircar Street in the north to Haridevpur Ajeya Sanghati, the crowd of revellers swelled as the day progressed.

The Met office had predicted rain on all four Puja days, saying the intensity could go up on Navami and Dashami. So far, Saptami has been the wettest. But the showers were localised. Ashtami was largely dry and Navami had not seen any rain till 8.30pm, according to the recordings of the Alipore Met office.

Pockets of North and South 24-Parganas, Nadia and the western districts of Bengal have received more rain than Calcutta on all three days, said a Met official. “A high-pressure zone persists over Bay of Bengal, leading to heavy moisture incursion into land. But a trough of low pressure that hovered over north Bengal and Odisha till Sunday has moved away,” said G.K. Das, director, India Meteorological Department, Calcutta.

The Met office has predicted rain and thunderstorm for Dashami as well.

People who chose to stay indoor anticipating rain in the afternoon stepped out on the streets in the evening. “The afternoon was sultry and I chose to remain at home for a family lunch. I was almost sure it would rain. But since it did not, I decided to see some big-ticket Pujas in south Calcutta,” said Sudeshna Sarkar, 29, a resident of Jadavpur. Sarkar and her friends visited Jodhpur Park and Selimpur and were headed to Singhi Park.

Every time police stopped vehicles to allow pedestrians cross Rashbehari Avenue, the road looked like a sea of people. “A bulk of the 20,000-strong police deployment is at Rashbehari Avenue, Chetla, New Alipore and Behala,” said an officer.

In north Calcutta, too, Jessore Road, BT Road and RG Kar Road, were chock-a-block. The Bailey bridge on VIP Road and the EM Bypass-bound flank of Ultadanga flyover, both opened to tackle the Puja rush, have come in handy, said a traffic police officer. Kalighat and Dum Dum were the two busiest Metro stations.