Protest against assault on tribal teacher in Malda 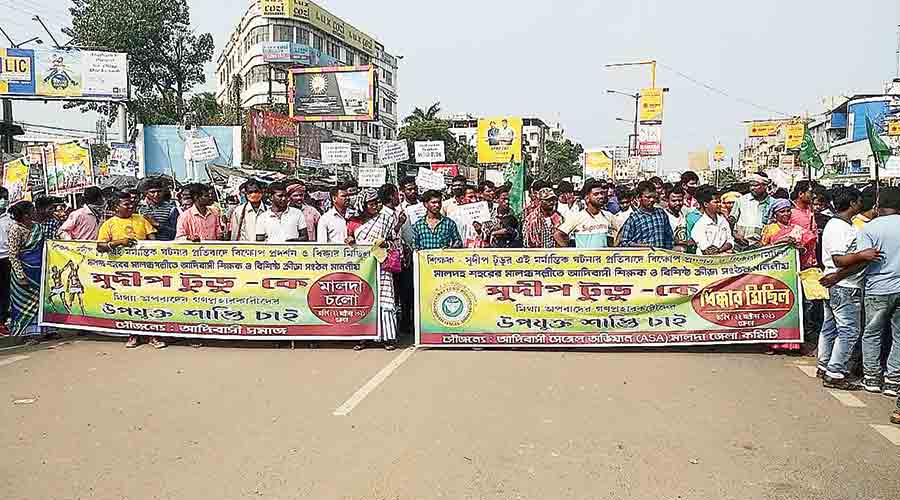 Hundreds of people under the banner of eight tribal outfits hit the streets in Malda on Friday protesting the alleged assault of a tribal schoolteacher by a local Trinamul leader after accusing him of theft a week back.

The protesters marched on NH12 shouting slogans and demanding immediate arrest of the accused leader who has allegedly gone into hiding after the incident.

On October 15, Sudip Tudu, a teacher of Manikora High School in Habibpur block of the district, was returning home after visiting a relative in Krishnapally here. Suddenly a group of youths led by Trinamul leader and former councillor Paritosh Choudhury intercepted him.

They accused him of stealing a bicycle and started assaulting him. Even though Tudu said he was a teacher, the group did not stop. Eventually, the teacher’s relatives came to his rescue. He was admitted to Malda Medical College and Hospital for treatment and was recently released.

After the incident came to light, resentment arose among the tribal population in Malda and in the neighbouring districts of North and South Dinajpur.

On Friday, hundreds of them gathered in Gayeshpur area here and took out the protest march which disrupted traffic along NH12.

“We want the police to arrest the accused within 72 hours. Such unprovoked attacks should stop,” said Nirmal Soren, a leader of an organisation representing tribal teachers.

As the protesters headed for Rathbari crossing, a large police contingent posted there stopped them.

Senior police officers came forward and spoke to the leaders, who said they intend to meet Alok Rajoria, the district police chief, and submit a memorandum.

They were, however, told that only a small delegation can go to the SP’s office. Though initially reluctant, the tribal leaders eventually agreed and met Amit Kumar Shaw, additional superintendent of police (headquarters). They were told that two persons have already been arrested in connection with the incident.

Shaw told reporters that they are trying to trace the Trinamul leader.

“A case under different sections of the Indian Penal Code as well as the SC/ST Act has been registered. All possible steps are being taken to arrest the main accused,” the police official said.