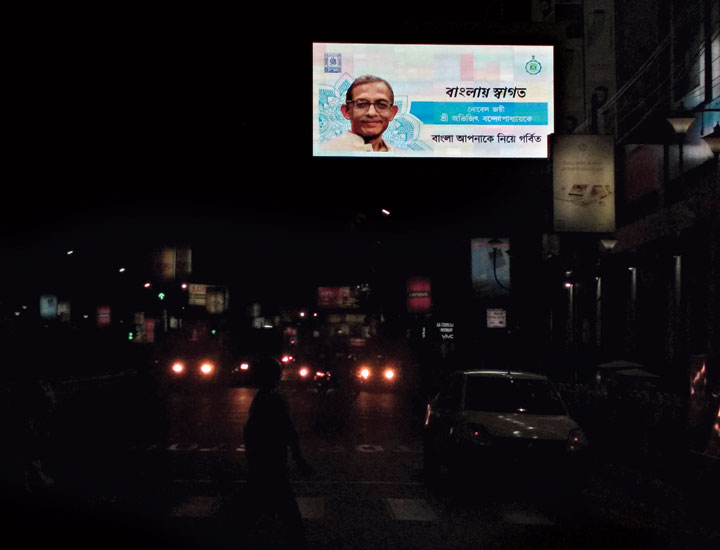 A picture of Nobel laureate Abhijit Vinayak Banerjee welcoming him to Bengal was being displayed in a LED display board on Saturday.
Telegraph picture
Our Special Correspondent   |   Published 19.10.19, 08:07 PM

The executive committee of the alumni association unanimously decided to recognise Banerjee’s achievements in a meeting held on the campus on Saturday.

The alumni association has decided to give him the award on January 20 next year during the founder’s day celebrations.

“We are trying to find out whether Abhijit Vinayak Banerjee will be able to come to the campus to receive the award. On January 19, we are planning to organise a get-together of the 1981 batch,” Amit Choudhury, member of the alumni association’s executive committee said.

The alumni association plans to felicitate Esther Duflo, one of the two other Nobel winners.

“We plan to felicitate both of them during the programme. But the award can be given only to an alumnus. If Abhijit Vinayak Banerjee cannot make it in January but can come in December we will make arrangements to give him the award as per his convenience,” Choudhury said.

The award has been earlier given to poet Sankha Ghosh and professor emeritus at Jadavpur University Sukanta Chaudhuri.

Presidency University has decided to emboss the faces of Banerjee and Amartya Sen side by side on a wall in the institution. Banerjee’s name will be added beside that of Sen’s on the university’s “Wall of Fame”.