Trinamul has alleged the posters were pasted by the BJP 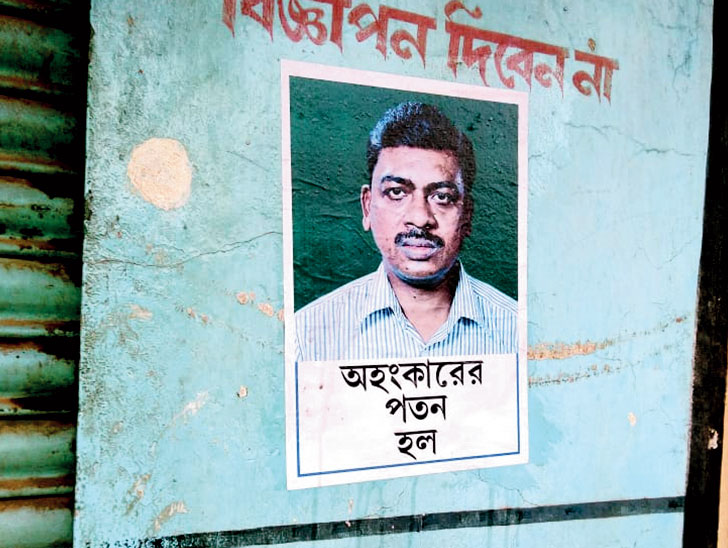 “Ahankarer patan holo (the end of arrogance)” – read about half a dozen posters with photographs of former Purulia Trinamul MP Mriganka Mahato which were found pasted at several places here on Sunday.

Mahato, an ophthalmologist, had won from the Purulia Lok Sabha seat on a Trinamul ticket in 2014. He contested from Purulia again in 2019 and was defeated by the BJP’s Jyotirmoy Singh Mahato by a margin of 2,03,231 votes.

Trinamul has alleged the posters were pasted by the BJP.

Mahato said he was not sure who had put up the posters.

“I am not sure who pasted the posters. People of Purulia know what kind of a person I am. So, I don’t want to attach much importance to the incident,” he said.

The posters were found near the zilla parishad building and a bank.

“This is malicious politics of the BJP after it won the Purulia seat. It is nothing but to defame our candidate. We will lodge a police complaint,” said Baidyanath Mondal, the vice-chairman of the Trinamul-run Purulia municipality.

Vidyasagar Chakrabarti, the Purulia district president of the BJP, has denied the charges levelled by Mondal.

“The allegation by Trinamul is baseless. We never put up such posters against defeated candidates. It is basically the fallout of infighting in Trinamul,” said Chakrabarti.

“We had never seen such practice in Purulia town. Our former MP was a nice person and we never saw any arrogance in him. It may be that the people who put up the posters wanted to convey that Trinamul was arrogant,” a trader here said.