The first flush tea which fetches excellent prices is over, pointed out a planter 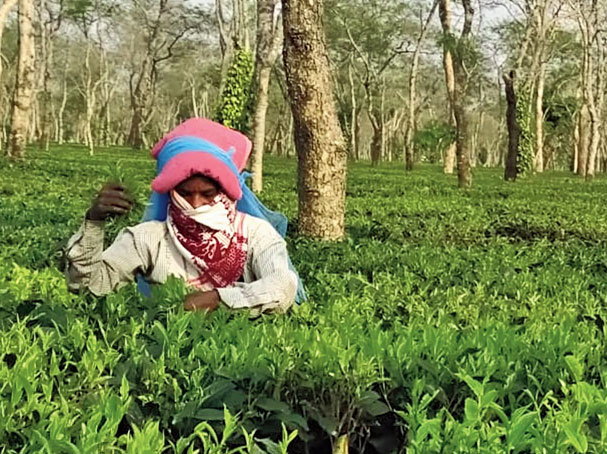 An association of tea planters has said the ongoing countrywide lockdown is likely to result in a production loss of around 110 million kilos of brew, which means a monetary loss of around Rs 1,200 crore.

“A conservative estimate with inputs received from S. J. Thomas & Co Pvt Ltd shows a loss to the tune of 110 million kg tea in the country,” said Raj Bansal, the president of the Tea Association of India.

In Bengal and Assam, tea production had resumed in February after the lean season. However, it came to a halt in the third week of March as the nationwide lockdown was announced by the Centre to stem the spread of the novel coronavirus.

The halt in the production prompted stakeholders of the industry to approach the central and state governments. Eventually, the Centre came up with a directive that maximum 50 per cent of the work force can be engaged at any time.

The Assam government went ahead with the directive. But in Bengal, the state allowed engagement of only 25 per cent of the workforce. In Assam, production started again on April 10, while in Bengal, it resumed on April 12 and afterwards.

In India, teas produced in Darjeeling, Assam, Terai and the Dooars fetch different prices. “Even if we consider the average auction price of 2019 of all varieties together, it would mean a minimum loss of around Rs 1,200 crore. That is why the industry has sought different relief measures from state governments and the Centre,” said a senior tea planter based in Siliguri.

As plucking had stopped, the gardens had to skiff the bushes to maintain a proper plucking table, said an office-bearer of the TAI.

“Tea gardens cannot afford to continue skiffing the tea bushes any more as it would be a problem to get quality tealeaves then. The industry desperately wants to optimise its production as the production in May means a lot for tea gardens and it can help them in getting over the liquidity crunch,” said Prabir Bhattacharjee, secretary general, TAI.

The first flush tea which fetches excellent prices is over, pointed out a planter. But the riders of the Centre and the state governments that only half or one fourth of workers can be engaged left the tea companies worried.

“Estate managers are not sure whether they can scale up production with limited workforce. The final loss can, however, be estimated only after the industry returns to normality,” he said.

To tide over the situation, the TAI president said, the planters sought a financial package in terms of interest subvention, enhancement of working capital limit and relief in payment of electricity charges and provident fund dues from the central and state governments.

“We hope the governments will come forward with assistance for the industry,” said Bansal.