Patient jumps from 7th floor of hospital in Calcutta

Sources at Institute of Neuroscience say he was 'very very critically injured' and his skull, rib cage and left hand were badly damaged 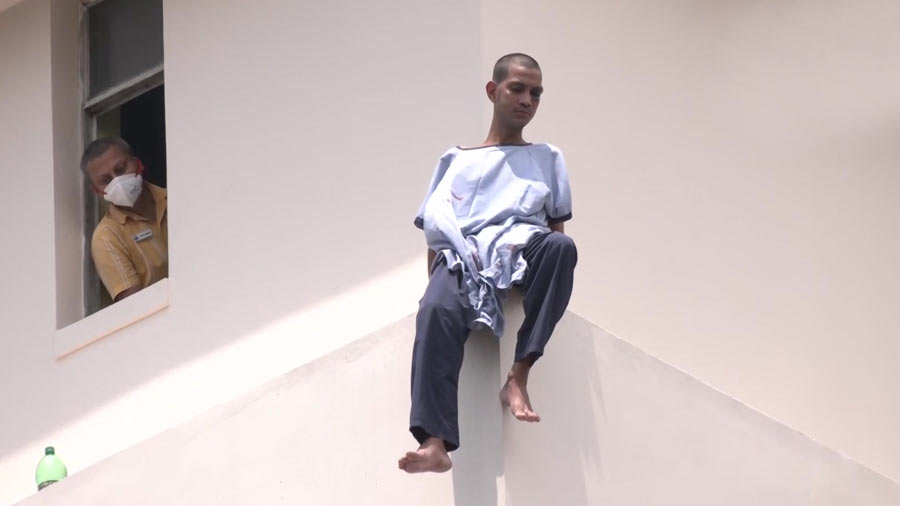 Sujit Adhikary had sneaked to the cornice through a gap in the glass window in the ward where he was under treatment at the Institute of Neuroscience.
Twitter
Our Bureau, PTI   |   Calcutta   |   Published 25.06.22, 01:13 PM

A male patient, who had escaped from his bed at a private hospital at Mullickbazar in central part of the city and sat on the edge of a cornice on the seventh floor for over two hours, fell off and critically injured himself on Saturday, a police official said.

Sujit Adhikary had sneaked to the cornice through a gap in the glass window in the ward where he was under treatment at the Institute of Neuroscience. He then sat on the edge precariously as anxious bystanders looked on and the fire brigade, police and hospital authorities frantically tried to bring him down.

"He fell off at around 1:10 pm and hit the cornice of the floors below at least twice before landing on the ground," the official said.

He was "very very critically injured" and his skull, rib cage and left hand were badly damaged, a hospital official said.

The police official said it appeared that the patient had stood up on the cornice on seeing the net being fixed by disaster management personnel on the ground and tried to climb down. But his hand slipped and he fell.

"The hydraulic ladder which was rushed to the spot could not be used as Adhikary threatened to jump when it was brought near him to winch him away," the police official said.

He had earlier ignored the pleas of the hospital employees and fire brigade personnel to return to the ward.

A crowd gathered before the hospital to have a glimpse of the man and many urged him to move away from the spot. The gathering affected vehicular traffic on one flank of the busy A J C Bose Road.

Adhikari's family had earlier tried to reason with him and broke down on seeing him fall.

The hospital closed its main entrance after the incident.

Earlier hospital employees put up sofas, cushions and other soft materials on the ground close to the building but the patient fell to the ground.