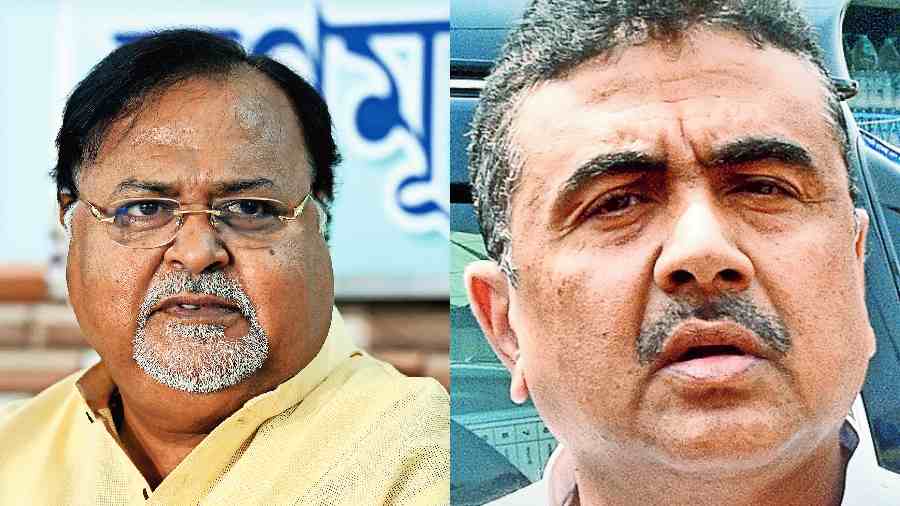 The blame-game between the Trinamul Congress and Opposition leader Suvendu Adhikari over alleged graft in the hiring of teachers continued on Tuesday with minister Partha Chatterjee accusing the Nandigram MLA of having taken “black money”.

Adhikari had claimed on Monday that he had not even taken a blackboard for his constituency when Chatterjee was education minister.

On Tuesday, Chatterjee said: “He (Adhikari ) didn’t take blackboards… he took black money.” “Those like him derive pleasure out of Bengal’s displeasure. The less said of them, the better,” he added.

Adhikari said central agencies should take all key accused into custody and interrogate them to gather evidence against the top-tier, allegedly involved in “scams”.

“The buck stops with her (Mamata Banerjee), her nephew ( Abhishek Banerjee)… others like Partha Chatterjee. This is for the CBI to find out,” said Adhikari in response to the “black money” charge.

“He has been repeatedly overstepping the bounds of constitutional propriety and sullying parliamentary democracy with his ways. He needs to be reined in by his bosses in Delhi. Not even his colleagues in the Bengal unit of the BJP are taking kindly to his ways,” said a senior on the treasury benches.