Advertisement
Home / West-bengal / Park puja to be scaled down

Park puja to be scaled down

“The park’s area is 40,000sq ft and around 90 per cent of the ground shelters the reservoir,” an engineer said 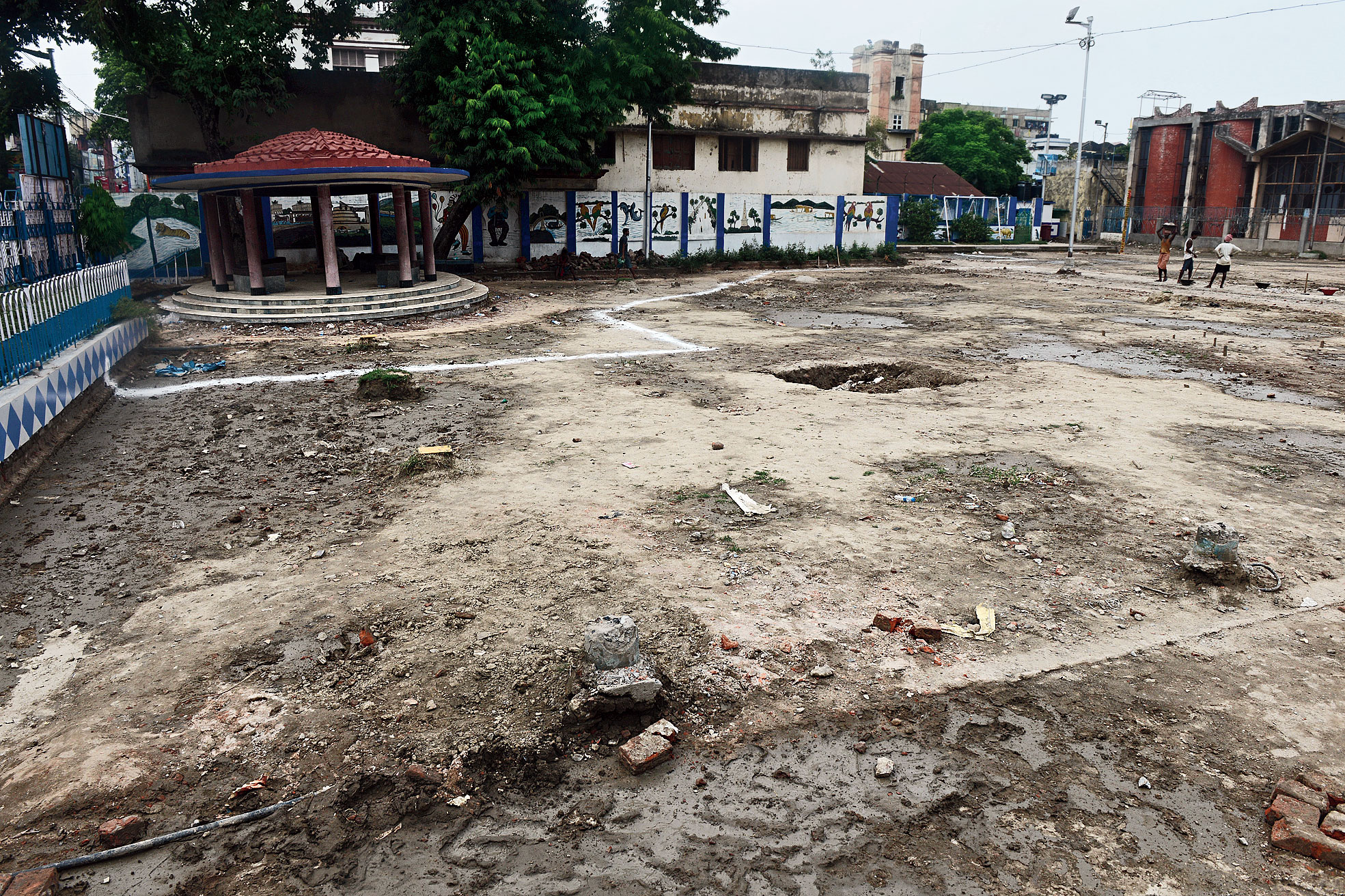 Durga Puja at Mohammad Ali Park is likely to be confined to the part of the ground that lies beyond the white line. That portion of the park does not have the crumbling reservoir under it
(Bishwarup Dutta)
Subhajoy Roy   |     |   Published 20.06.19, 01:52 AM

The Durga Puja at Mohammad Ali Park, which used to occupy the entire CR Avenue ground till 2018, is set to be confined to a small corner this year, the move sparked by fears of a cave-in because of a crumbling underground reservoir.

“The Puja will be held. We are working out the modalities. The scale may have to be reduced,” said mayor Firhad Hakim, who visited the park on Wednesday and spoke to members of the puja committee.

A portion of an overground boundary wall of the British-built reservoir had collapsed on March 31 and the debris fell on the adjoining footpath and the Esplanade-bound flank of CR Avenue.

Engineers had blamed the collapse on unscientific and unplanned addition of layers of soil on the reservoir over the decades to beautify the park. Days later, a team of teachers from Jadavpur University inspected the park and spotted a number of cracks on the reservoir’s arch-shaped ceiling.

The discovery of the cracks triggered speculations on whether the puja, among the top crowd-pullers in the city, would be allowed this year. Many had expressed the fear that the weight of thousands of revellers at the pandal and the adjoining fair could further worsen the already fragile condition of the brick reservoir.

Mayor Hakim’s statement on Wednesday, however, cleared the air.

A senior CMC engineer said on Wednesday the reservoir needed to be strengthened and allowing such a large mass of people across the park could lead to a disaster, even collapse of a portion of the ground.

“The park’s area is 40,000sq ft and around 90 per cent of the ground shelters the reservoir,” the engineer said.

Civic engineers want the puja to be held on the part of the ground that does not have the reservoir under it.

A JU team inspected the inside of the reservoir for over two hours. A member of the team said the walls inside were riddled with cracks. 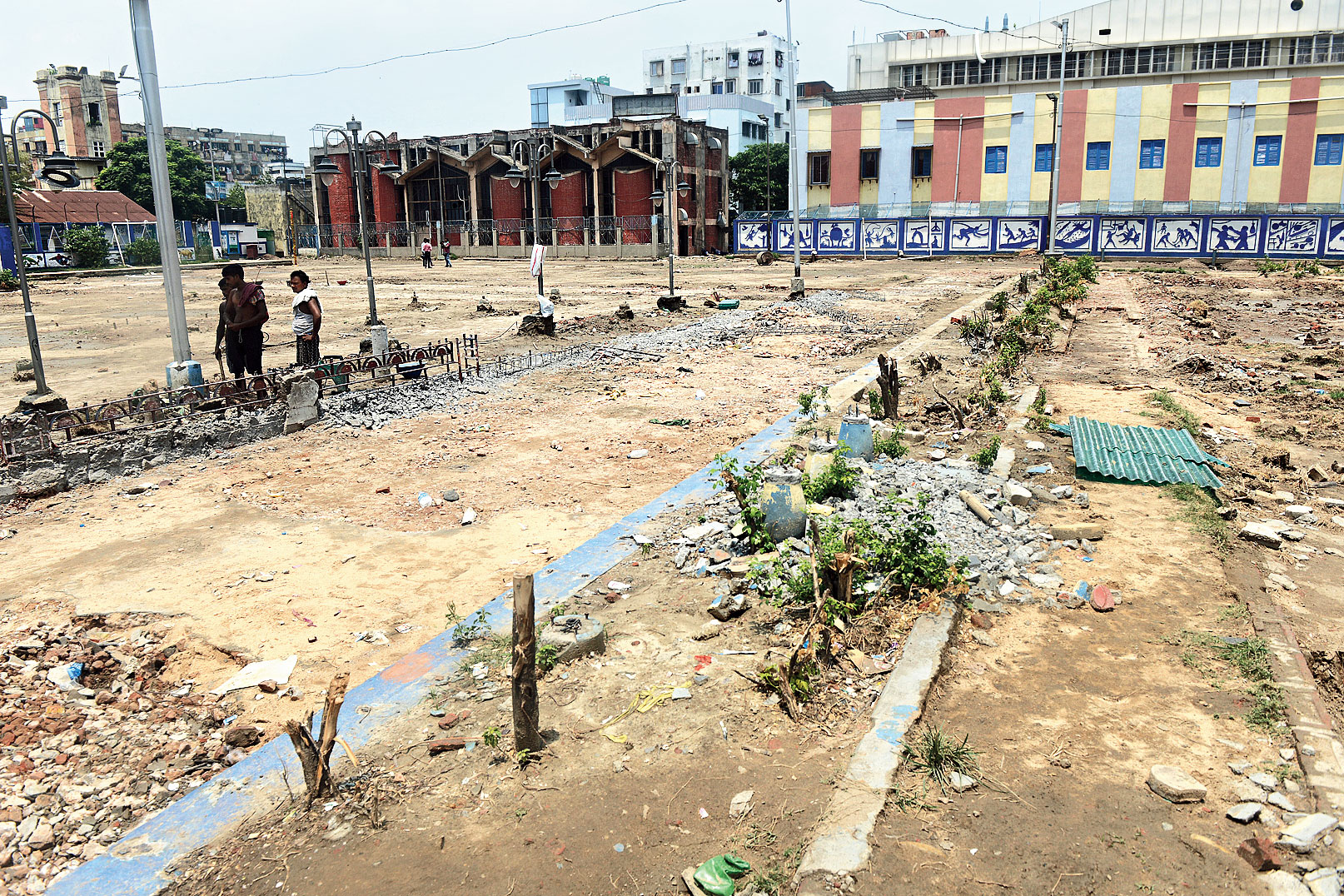 Gokul Mondal, an associate professor of construction engineering at JU and a member of the team, said they would hand over to the government a report listing “the immediate measures to be taken to the strengthen the reservoir” by the end of this week.

CMC engineers said they would decide on how big the pandal could be after going through the report. “The fair is unlikely to be held this year. There will hardly be any space for a fair,” the engineer said.

The Mohammad Ali Park Puja committee has already started preparations for the puja. “We did the khuti pujo on Monday. We will organise the puja but will keep in mind the safety of visitors,” said an organiser.

The park has remained closed to the public since March 31. The civic body is now ridding the park of unnecessary load such as slips and other play tools of children and some soil.

The reservoir, with an arch-shaped roof, is being used to store drinking water since 1998, when a booster pumping station was set up on the park premises. Before that fire tenders used to draw water from the reservoir.