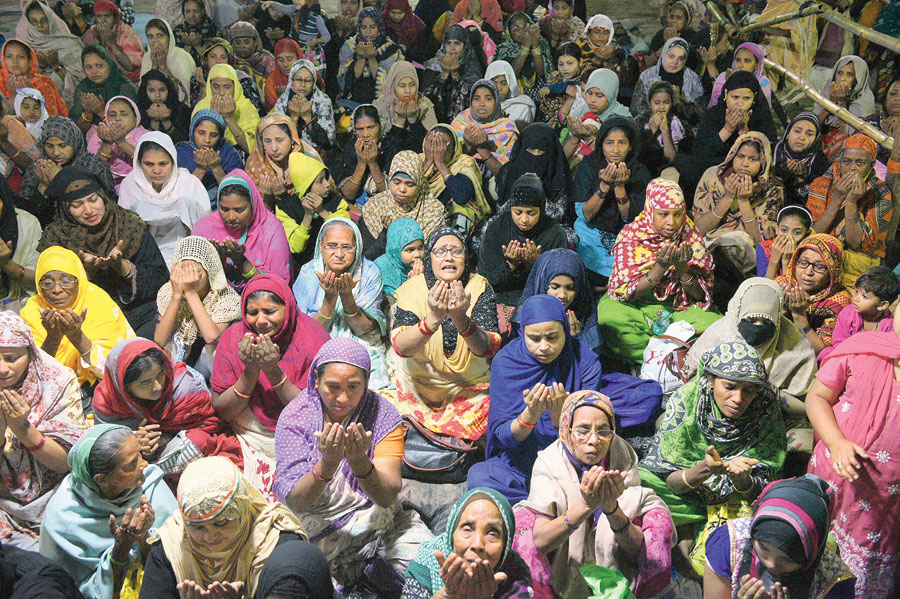 Several hundred hands were raised in a prayer at Park Circus Maidan on Tuesday evening to end the violence in Delhi.

The “Dilli ke liye dua” lasted for five minutes and some of the older women at the protest against the amended citizenship regime had tears in their eyes when the prayer ended.

“Neta logon ne kaha ke goli maro, abhi log goli mar rahe hain (The leaders had exhorted people to shoot, the people now are shooting),” Shafiqa Hussain, a homemaker from Alimuddin Street and a regular at the Park Circus protest, said. “The people who are instigating the violence have blood on their hands.”

Rahima Khatun, who has been camping at Park Circus Maidan since the early days of the protest, said she mourned each life lost but the violence did not scare her.

“The fire, smoke and blood no longer scare me. Stepping out of the interiors of home, to join a protest against the state, meant taming some of my worst fears. Now, after so many days, I don’t have any fear left inside me,” she said.

The vigil at Park Circus Maidan against the Citizenship Amendment Act, National Register of Citizens and the National Population Register completed 50 days on Tuesday, the longest such demonstration in the country after the one in Delhi’s Shaheen Bagh.

Rahima usually sleeps under the roofed podium at the centre of the ground. Once or twice every week, she visits her home in Metiabruz to meet her daughter, a college student, and husband, a typist. “My husband is diabetic. My daughter takes care of the household, including cooking and giving medicines to her father,” she said.

Several programmes were held at the protest venue on Tuesday evening. One was a one-act play called Kantatar (Barbed Wire). It showed snippets from the life of a Hindu family that chose to stay back in East Pakistan (now Bangladesh) post-Independence because their Muslim neighbours requested them to.

“The play is based on my grandparents. My father and his younger brother came to Calcutta in search of better opportunities. But my grandparents and their middle son stayed back until the Liberation War (that led to the birth of Bangladesh). My uncle was butchered by (Pakistani President) Yahya Khan’s men. Having lost a son, my grandparents came over to Calcutta,” said Ratna Saha Roy, who has written the play.

Ratna lives in Bikramgarh, an area dotted with neighbourhoods where a large number of migrant families from East Pakistan/Bangladesh live. “The BJP is trying to shore up support for the amended citizenship act near my home. Their leaders are saying that Muslims in Bangladesh drove out our forefathers. My play is a protest against such a false narrative,” she said.

In the play, Ratna played her grandmother who says how Muslims played a key role in organising her family’s Durga puja.

Before the play, a group of women activists took to the stage and sang songs of harmony. One of the songs was Tu Hindu banega na Musalman banega, insaan ki aulad hai insaan banega (You will be neither a Hindu nor a Muslim, you were born of humans and will become a human).

It was penned by Sahir Ludhianvi and sung by Mohammad Rafi in the 1959 film Dhool ka phool.

In the audience were two friends from Ballygunge, who “come to Park Circus as often as possible”. One of them is a Sikh, the other a Hindu.

One runs a business and has to shuffle between Bangalore and Calcutta. “I am too scared to take part in any protest in Bangalore. The BJP is the ruling party there and police are on the prowl for protesters, ” said the 36-year-old.

Her friend, a 35-year-old researcher, said she had several Muslim friends who were scared even to step out of their homes. “My friends are watching me. I need to have an answer when I meet them. I need to set an example,” she said.