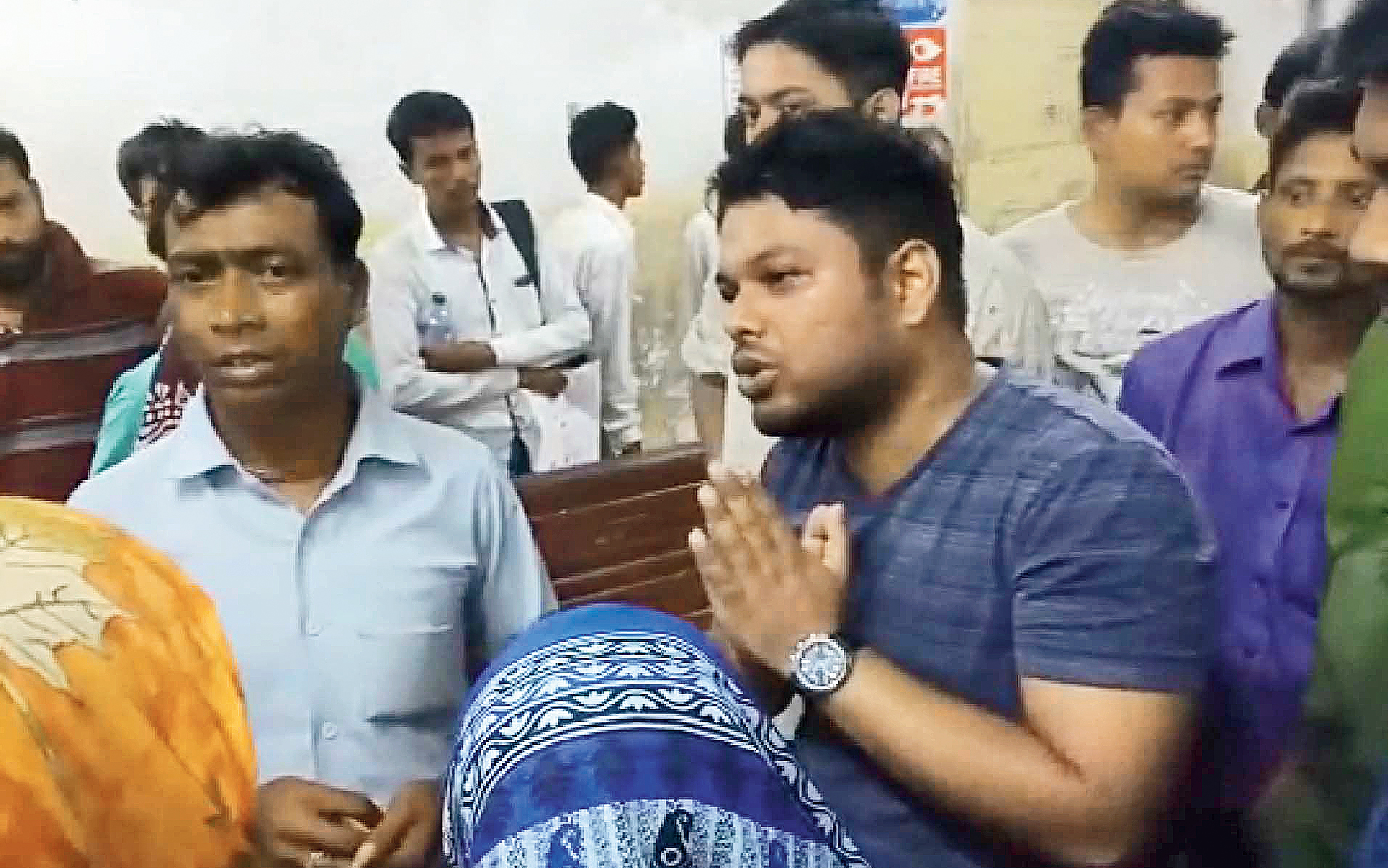 A junior doctor apologises to patients and their relatives at Burdwan Medical College and Hospital for not being able to provide treatment.
Picture by Anirban Hazra
TT Bureau   |   Burdwan   |   Published 14.06.19, 07:52 PM

Burdwan Medical College and Hospital authorities on Friday set up a parallel outpatient department at the emergency ward as the usual OPD has remained closed since Wednesday because of the cease-work by junior doctors.

Senior medical officers and professors of the medical college attended to thousands of patients at the parallel OPD and the emergency ward.

The doctors, however, wore black badges to protest the assault on junior doctors at NRS Medical College and Hospital on Monday night.

The BMCH authorities brought additional chairs and tables to the parallel OPD inside the emergency ward, which hardly left any legroom.

“We had no option but to open this temporary OPD at the emergency ward considering the sufferings of the patients. The doctors and patients are facing problems because of lack of space and the hot and humid weather. But we are helpless,” said Utpal Dawn, the medical superintendent and vice-principal of BMCH. He said the temporary OPD would continue till normality was restored.

Dawn has urged the agitating junior doctors to join work.

The hospital authorities did not issue fresh tickets to patients at the OPD and treated only those who already had the cards.

Fifteen of the 17 OPDs are now running from the emergency ward, while the paediatric and gynaecology OPDs are functioning from the inpatient department.

The 300-odd medical officers and professors at the medical college were seen working by rotation on Friday.

Dawn and his deputy also joined the doctors in examining patients.

Hospital sources said around 1,500 patients were treated at the OPD on Friday, apart from over 1,000 patients who arrived at the emergency ward till the afternoon.

Junior doctors and medical students continued to demonstrate near the emergency ward on Friday. They frequently shouted slogans over microphones, which are banned in hospitals and their vicinity.

The authorities of North Bengal Medical College and Hospital have informed the health department that the senior doctors will not be able to shoulder the additional burden beyond 24 hours after the junior doctors struck work.

NBMCH was further hobbled on Friday by the resignation of 119 of the facility’s 300-odd senior doctors. Those who have resigned have, however, said that they will continue to provide emergency services to patients.

The 250-odd junior doctors at NBMCH, where around 2,000 patients come every day and around 1,200 are admitted currently, have struck work since Tuesday.

Many doctors and employees at Malda Medical College and Hospital have also tendered their resignation.

Prabir Deb, the principal of NBMCH, and Kaushik Samajdar, the vice-principal and superintendent, wrote to the director of health education on Thursday evening that the senior doctors would not be able to shoulder the additional workload beyond 24 hours as the junior doctors had gone on strike. That time limit ended on Friday evening.

The letter said “the senior doctors had expressed their inability to run the hospital beyond 24 hours without adequate manpower and security”.

Most of the doctors at Suri district hospital in Birbhum who had said on Thursday night that they had submitted their resignation to the superintendent carried on attending to patients on Friday, but wore black badges.

The doctors said though they had put in their papers, they had decided to carry on working in the interest of the patients.

Debasish Debanshi, a gynaecologist at the hospital, said: “We have not withdrawn our resignation, but at the same time, have decided not to stop working in the interest of the patients. The patients are not our enemies and we have no intention of making them suffer.”

Most of the 67 doctors at the 500-bed Suri district hospital had on Thursday night submitted their resignation to express solidarity with the protests being held by junior doctors across the state.

After the news of the resignation of the doctors spread, senior BJP and Trinamul leaders visited the hospital to speak to them. The BJP’s Doodh Kumar Mondal and Trinamul’s Bikash Roy Chowdhury and Ashok Chatterjee have urged the doctors not to quit.