The service has been introduced in association with Family Planning Association of India, a social organisation that works for public health 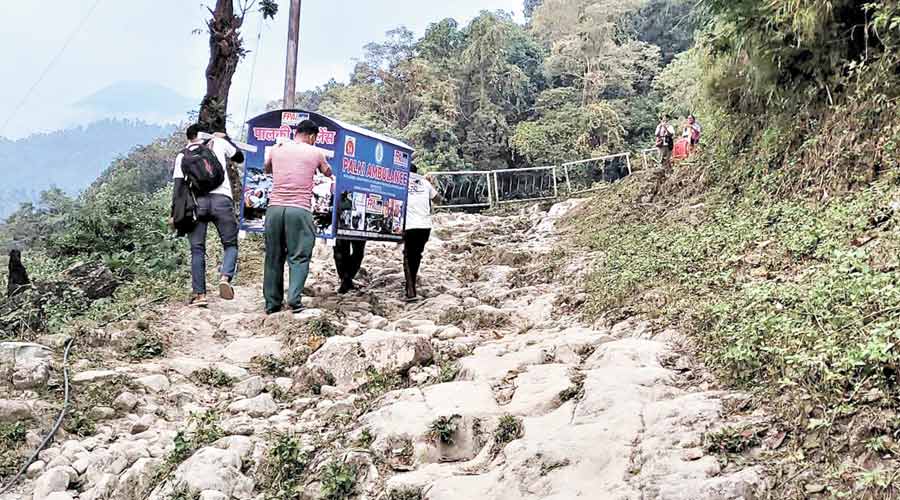 The Alipurduar district administration launched a “palanquin ambulance” service on Wednesday to ferry patients from the remote areas of Buxa hills.

There are 13 villages in the Buxa hills which are on the India-Bhutan border. Around 5,000 people reside at these hilly hamlets.

So far, any patient who needed medical treatment had been brought by local people on bamboo-made stretchers till the zero point (the location till where vehicles can reach).

From there, the patient was carried to the Kalchini block health centre or the district hospital in Alipurduar, located around 40km away.

“It was precarious for a patient to be taken on a bamboo stretcher as there was always a risk that the person might slip from it. Besides, it was inconvenient for those who would carry the patient. The ‘palanquin ambulance’ is a much better alternative. The patient will be safe and locals will find it easy to carry,” Alipurduar district magistrate Surendra Kumar Meena said.

The service has been introduced in association with Family Planning Association of India, a social organisation that works for public health.

On Wednesday, the “palki” or the palanquin was introduced in Buxa. A group of locals carried the “palanquin, an enclosed box fitted with wooden handles and a vent where a person can sit or lie, to the hills. Meena launched the facility.

“A patient can be provided with saline and oxygen inside the palanquin. Also, there is a separate space for newborns and infants. One palanquin was introduced today and if required, more would be provided to the residents of the remote villages,” said a representative of the social organisation.

Residents of the hamlets have appreciated the administration’s initiatives.

“It is good that a ‘palki ambulance’ facility has been launched here. Patients can be carried now with much comfort and if required, oxygen can be provided to them en route. We hope the administration will introduce more facilities at the new health centre,” said a resident of Lepchakha, one of the hamlets in the Buxa hills.