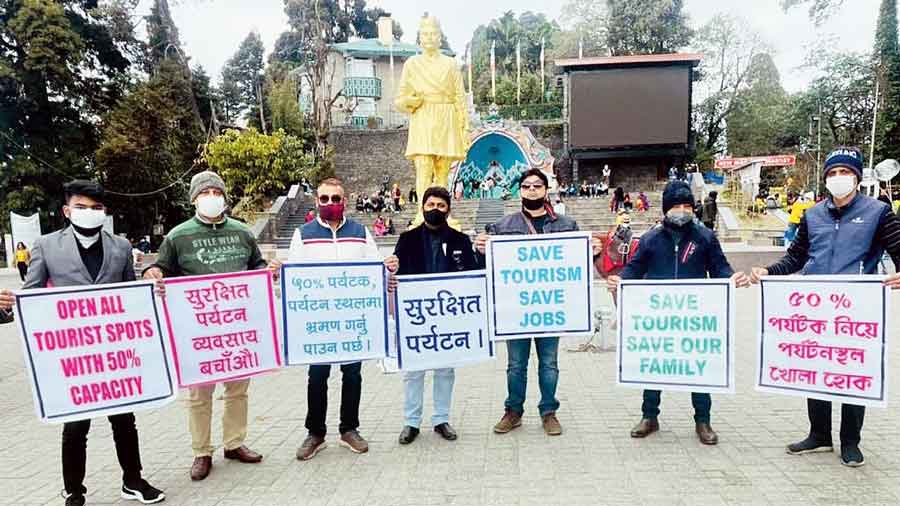 The demonstration by the members of the tourism stakeholders’ association at Chowrasta in Darjeeling on Friday
The Telegraph Picture
Our Bureau   |   Siliguri/Alipurduar   |   Published 08.01.22, 03:10 AM

Tourism stakeholders in north Bengal on Friday urged the Mamata Banerjee government to allow the opening of tourist spots with 50 per cent capacity for the survival of the industry that took a beating in the past two years because of Covid-19.

A delegation of the Eastern Himalaya Travel & Tour Operators’ Association (EHTTOA) met Darjeeling district magistrate S. Ponnambalam on Friday and submitted to him a memorandum addressed to the chief minister.

“We have mentioned in the memorandum how the tourism industry suffered in the past two years. In the past few months, tourists had started flowing in. But the sudden decision of the state government to close down all tourist spots because of a surge in Covid cases has come as a jolt for the sector. We want the state government to allow the tourist spots to reopen and function with 50 per cent capacity like shopping malls, restaurants and multiplexes,” said Debasish Maitra,
the president of the association.

He said as hotels, resorts, homestays and other accommodations were open and there was no major restriction on inter-state and intra-state travel, the relaxation (to run tourist spots with 50 per cent capacity) could help the tourism industry survive in the region.

“In the neighbouring state of Sikkim, all tourist spots are open and there are visitors also. We would like to reiterate that we would adhere to all necessary protocols,” said Sandipan Ghosh, secretary of the association.

After the submission of the memorandum, the delegates walked up to Chowrasta, the popular promenade in Darjeeling, and held a silent demonstration seeking the reopening of the tourist spots.

In the eastern Dooars, a group of people, including tourist guides, cab drivers and members of local cultural troupes, held a protest programme in front of Jaldapara National Park – the largest rhino habitat in the state – from Friday morning to afternoon over the same demand.

“In reserve forests, entry of tourists has been stopped by the state forest department. We are facing financial hardships as tourists are not turning up. We want the department to allow entry of tourists for car and elephant safaris with 50 per cent capacity. This would at least help us make earnings so that we can arrange two square meals
for our families,” said a cab driver.