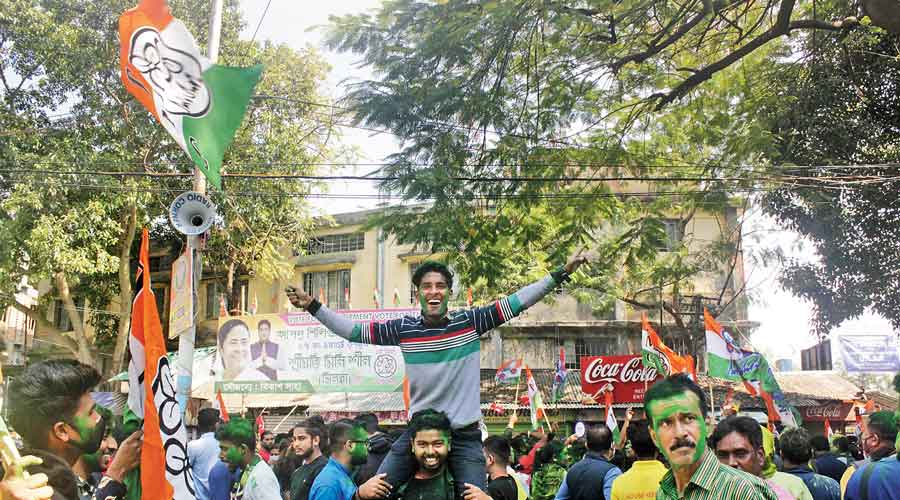 With Trinamul flag in the hand and mounted on a friend’s shoulders, a supporter celebrates the party’s victory in Siliguri on Monday.
Passang Yolmo
Avijit Sinha And Bireswar Banerjee   |   Siliguri   |   Published 15.02.22, 12:08 AM

The Trinamul Congress on Monday won the Siliguri Municipal Corporation for the first time, trumpeting its comeback in north Bengal where the BJP made steady electoral gains in the past few years.

The ruling party of Bengal emerged victorious at the SMC by winning 37 of 47 seats.

“Unlike the three other civic bodies where Trinamul was already in power, the win at the SMC is a major success for the party. It is a positive message for Trinamul candidates and workers at 19 municipalities in the region where elections would be held on February 27,” said a senior Trinamul functionary in Siliguri.

The BJP had won both the Assembly seats — Siliguri and Dabgram-Fulbari — which cover the SMC area in 2021. The party was also ahead in 14 of the 19 municipalities.
“We have proved ourselves and we believe our leaders, candidates and workers will put up all efforts to secure other civic bodies where elections would be held soon.

People of Siliguri have voted in favour of development and we are confident that the voters in the other towns will stand with us,” said Gautam Deb, who was announced as the next mayor of Siliguri by Trinamul chairperson Mamata Banerjee on Monday.

Ahead of the SMC elections, Trinamul was trying to prove that it would dent the BJP’s support base and it had started reviving its base in north Bengal. The BJP was steadfastly focusing on Siliguri to drive home the point that it was still the strongest political force, at least in the northern districts of north Bengal.

“However, today’s results show that Trinamul has succeeded in its strategy, while the BJP has failed. This will definitely have an impact on the results of the 19 municipalities. It would be interesting to see whether the BJP manages to achieve a majority in any of these civic bodies,” said a political observer.

That the tides turned in Trinamul’s favour in Siliguri was evident from the share of votes.

In the Lok Sabha elections in 2019, the BJP had secured 59.68 per cent votes in the Darjeeling seat (under which Siliguri falls), while Trinamul had got 26.78 per cent votes.

Gautam Deb being garlanded in Siliguri on Monday after his win from ward 33.
Telegraph photo

In the Assembly elections last year, the BJP had secured around 50 per cent votes in the two Assembly seats under which the civic area is located (Siliguri and Dabgram-Fulbari). Trinamul’s vote share was 30.11 per cent and 39.19 per cent in these constituencies.

“In the civic polls, Trinamul could increase its vote share to 47 per cent, while the BJP’s share depleted to 23 per cent, followed by the Left (18) per cent. This clearly shows that the saffron camp’s grip has considerably loosened in the city,” pointed out the observer.

Alok Chakraborty, the chairman of Darjeeling (plains) district Trinamul, said the victory at the SMC was the first step for the party to increase its clout in the Siliguri sub-division.

“The elections to the Siliguri Mahakuma Parishad are due. The party has never secured a majority at this rural body and we would break the record this time,” he said.