‘No’ to Jai Sri Ram, then blows rain 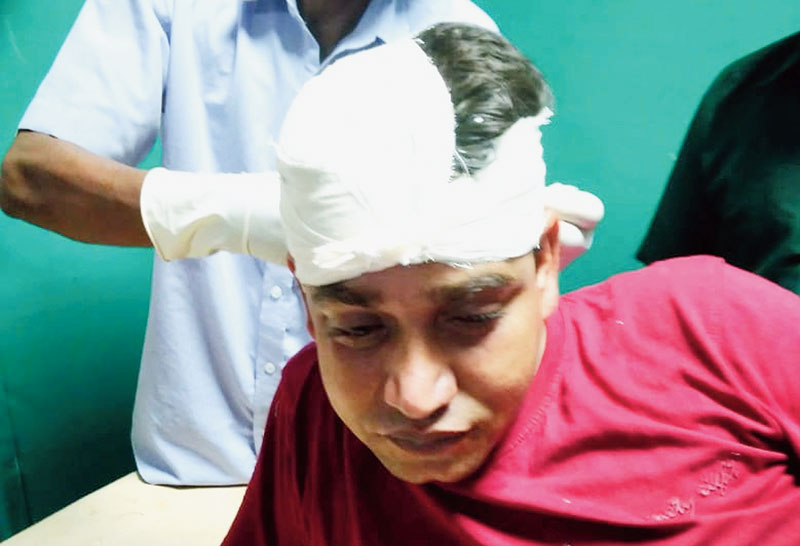 A Trinamul zonal committee president was beaten up and his house ransacked by alleged BJP activists in West Midnapore’s Salboni on Tuesday night after he refused to chant “Jai Shri Ram” and join the Opposition party.

Trinamul sources said exit polls indicating a BJP victory had emboldened BJP activists and some aired fears of a “rampage” once the results are out on Thursday. The area falls under the Midnapore Lok Sabha seat, where Bengal BJP chief Dilip Ghosh is pitted against Manas Bhuniya of Trinamul.

On Tuesday night, 15 to 20 suspected BJP activists barged into the house of Trinamul leader Kanchan Chakraborty, 32, in Salboni’s Bhadutala village and thrashed him with rods. The BJP has denied its workers were involved in the attack.

In the same district on May 4, a group had raised Jai Shri Ram slogans when chief minister Mamata Banerjee’s convoy was on its way to Chandrakona. The Trinamul chief stopped and walked towards the slogan-shouters, but they fled.

“The BJP (workers) went on the rampage because they think they will win. They came to my house on motorbikes around 10.30pm. They barged into my house armed with rods and asked me to chant Jai Shri Ram and join the BJP. When I refused, they started beating me up. Citing exit polls, they claimed they had already won the elections,” Kanchan, a real estate promoter, said from hospital where he was being treated for several injuries including head wounds.

BJP leaders rubbished Chakraborty’s allegations and claimed the attack on him was a public outburst against his “illegal activities”. “The BJP has nothing to do with the incident. Locals were fed up with Kanchan’s illegal activities and corrupt practices,” said Arup Das, a district general secretary of the BJP.

A police officer said preliminary probe indicated there was a clash between Trinamul and BJP supporters at a local club on Tuesday evening after a disagreement over a game of carrom.

Trinamul leaders said CPM harmads (armed CPM activists) had crossed over to the BJP. “Former CPM harmads switched to the BJP and are back to their old strong-arm tactics,” said Trinamul district president Ajit Maity.

West Midnapore superintendent of police Alok Rajoria said the probe was on.