In his 30-minute address, Modi uttered not a word on the boorish behaviour of his supporters or to apologise for it 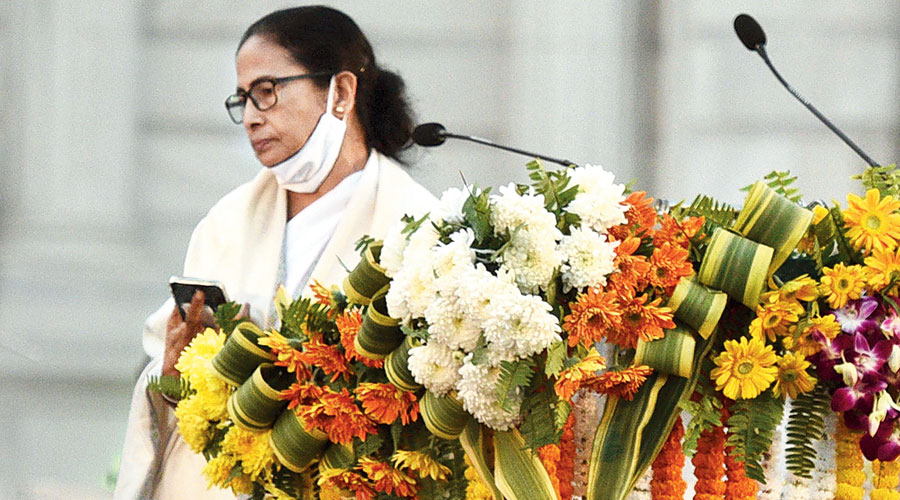 Mamata Banerjee on her way back to her seat after telling the audience at Victoria Memorial that in protest, she is not making a speech.
Devadeep Purohit   |   Calcutta   |   Published 24.01.21, 03:37 AM

With these words, chief minister Mamata Banerjee on Saturday reminded the Narendra Modi government of a basic lesson in civility that Indians raised on the philosophy of Atithi Devo Bhava should be well familiar with: You do not insult your guest.

A section of the audience at an event hosted by the Union culture ministry at Victoria Memorial to celebrate the 125th birth anniversary of Netaji Subhas Chandra Bose had erupted in chants of “Jai Shri Ram” as Mamata was invited to speak.

The chanters ignored appeals from the emcee to “calm down” and allow the chief minister the “opportunity” to say a few words on this “auspicious occasion”.

The sloganeering continued as she spoke.

“I thank the Prime Minister and the Union culture ministry for holding this programme in Calcutta,” the chief minister said. “But it is unbecoming of you to invite someone and then insult them. In protest, I am not speaking any more. Jai Hind. Jai Bangla.”

Mamata then returned to her seat, near that of Prime Minister Narendra Modi, who sat impassively. Union ministers Prahlad Patel, whose department had hosted the programme, and Babul Supriyo were also on the dais.

The heckling should have upset the Prime Minister and his colleagues on several counts. In a culture that prides itself on treating the “atithi” (guest) as “deva” (a god), to insult a guest should be sacrilege; the slogan-shouting had disrespected the memory of the national icon whose anniversary was being celebrated; and it had shattered the dignity of a programme hosted by the Government of India. 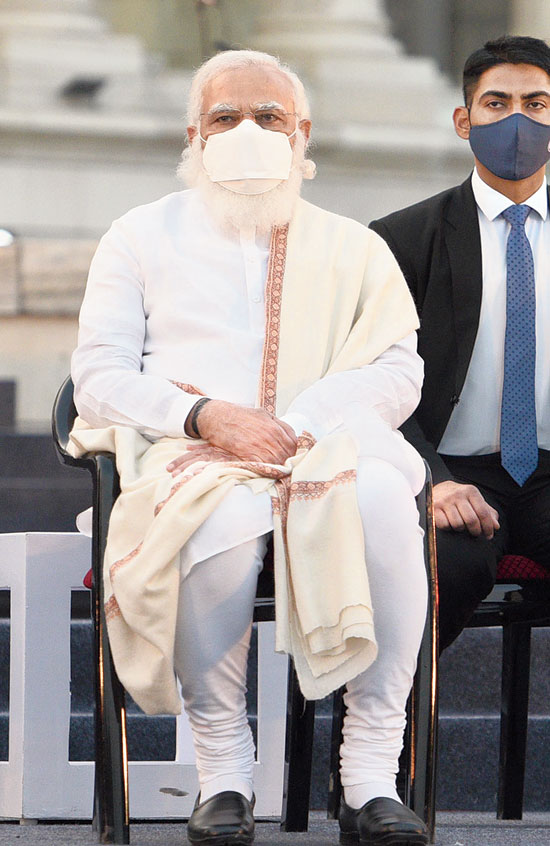 Narendra Modi on the dais at Victoria Memorial. In his speech, Modi uttered not a single word about how a section of the audience had tried to heckle Mamata
Pictures by Gautam Bose

Not a word from PM

If Modi was upset, he did not show it. Anyone who had expected the Prime Minister to condemn the boorish behaviour of his supporters or to apologise for it to Mamata, who was a guest at his government’s programme, would have been disappointed.

In his 30-minute address, Modi uttered not a word on the subject. He spoke of Atmanirbhar Bharat and contended that his pet theme bore the imprint of Netaji’s philosophy.
Mamata sat through the one hour that remained of the programme, occasionally looking up at the clear January sky. Not once was the “Jai Shri Ram” slogan heard after she spoke, making it clear the intent was only to heckle her. The BJP is known to use the chant variously as a greeting, a war cry and a taunt.

Sources close to Mamata said she had initially been in two minds whether to attend the programme because she had had a busy day that began at 10.30am with a visit to Netaji Bhavan on Elgin Road. She later led a colourful procession through 7.5km from Shyambazar to Esplanade as part of the state government’s celebrations of the 125th anniversary of the icon from Bengal.

Mamata eventually decided to go, joining Modi in inaugurating an exhibition on Netaji and then escorting him to the main venue on the Victoria Memorial lawns.

“Despite her pressing schedule, she went to attend the central government programme…. But see the reception she received at the programme,” a source close to the chief minister said.

That something like this might happen was clear the moment Modi reached the venue at 4.28pm. As the Prime Minister’s image flashed on the giant screens, cries of “Jai Shri Ram” filled the air, much to the surprise of some in the audience who had received the invitation from the Union culture ministry.

Sources in the BJP said that though it was a government programme, the state BJP unit took the lion’s share of the invites and distributed them among party leaders and loyalists. Party leaders were seen waiting at the south gate of Victoria Memorial, from where most of the invitees entered, with bunches of invitation cards and distributing them. When BJP state president Dilip Ghosh was entering the venue, most of the people waiting in the queue greeted him with “Jai Shri Ram”.

“I see our people all around…. It’s like a party event,” a middle-aged man in a saffron bandhgala was overheard telling a man who claimed he had been to the airport to receive Modi.

The same man was among those who raised the “Jai Shri Ram” chant when Mamata spoke. Asked why, he said: “Chanting ‘Jai Shri Ram’ is part of Indian culture…. If she (Mamata) has a problem with it, we can’t help it.” He refused to identify himself.

But the state BJP was in two minds whether to endorse what happened in Victoria Memorial. “Such slogan-shouting at the programme was unfortunate,” said party spokesperson Shamik Bhattacharya.

Kailash Vijayvargiya, the BJP’s Bengal minder, however tweeted: “Greeting someone by Jai Shri Ram is considered insult by Mamata-ji. What kind of politics is this!”
The peals of laughter from the audience after the chief minister returned from the podium without speaking left no one in any doubt about the intent of the sloganeers.