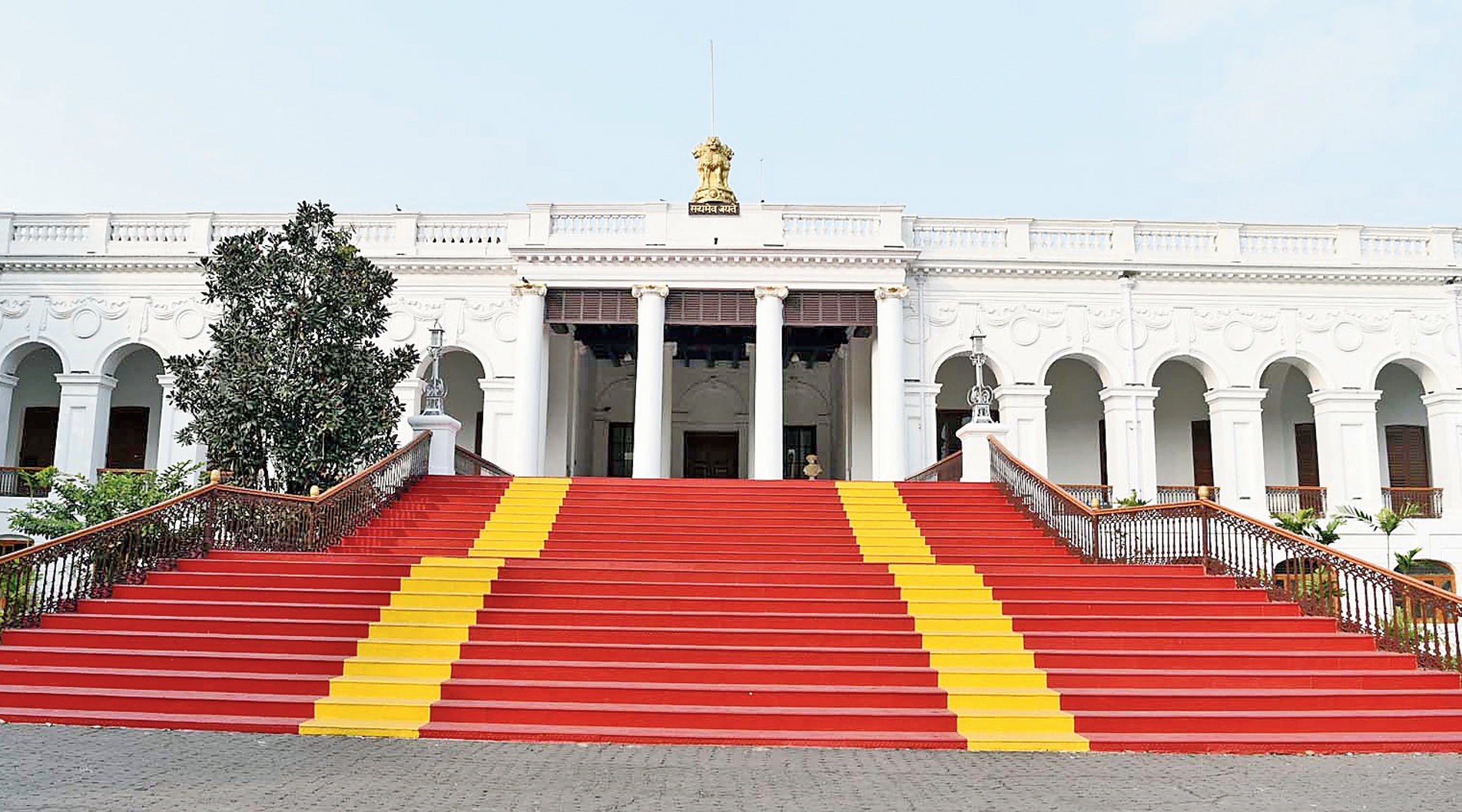 The staircase on the southern side of National Library’s Belvedere that has been covered with a material painted red and yellow.
Pictures by Gautam Bose
Subhajoy Roy   |   Calcutta   |   Published 02.12.19, 08:48 PM

One of the two stairways of National Library’s Belvedere has been covered with an anti-skid mat and painted deep red-and-yellow that conservation architects said was incompatible with the heritage structure and violated municipal corporation’s heritage rules.

The three-storey structure with the grand stairs is called Belvedere, where Warren Hastings lived and was later used to host tea parties of Viceroys in British India.

The stairway of the Belvedere is what gives the building its grandness, said architects. They said that the concept of having grand stairs was modelled on the Ziggurat of Ur, built during the Bronze Age in modern-day Iraq.

“Whenever a building is elevated above the scale of humans so that people respect its grandeur, a grand stairway is built. There are many such buildings with such grand stairways,” said architect Abin Chaudhuri.

“But if the stairs start attracting all attention, and that too for wrong reasons, then it becomes a failure,” said Chaudhuri. The bright red-and-yellow colours will turn all attention towards the stairs, he said.

Kamalika Bose, a conservation architect, said the colour was “jarring and incompatible” with the rest of the structure. “Use of such colours is both against the heritage laws of the Calcutta Municipal Corporation and the grain of conservation work,” said Bose.

The Graded List of Heritage Buildings of CMC lists National Library as grade-I. The Centre’s ministry of culture is the custodian of the building, but Bose said that the CMC’s heritage laws applied to it.

The heritage laws states that “no external change will be permissible” in grade-I buildings. It added that “use of the building should also be compatible with the category of the heritage building”.

When Metro called Padma Lochan Sahu, the director-general of National Library, on Monday evening, he said: “The restoration of the building was done by the central public works department. I have taken note of what you said about the colour scheme of the stairs.”

But before it became a library, Belvedere served as residences of British officers in India. It was not clear exactly how old is the Belvedere. A historian, who didn’t want to be quoted, said that governors of Bengal lived at Belvedere between 1858 and 1911.

Later, when the Viceroy moved to Delhi in 1911, the governor of Bengal moved to Raj Bhavan. The library services of National Library were shifted to Bhasa Bhavan, a new building on the campus, a few decades after Independence to restore Belvedere.

The restoration of the Belvedere began in the latter half of the last decade and it got over about a year ago, said a source in the ministry of culture. He said that Belvedere was now used to host events. 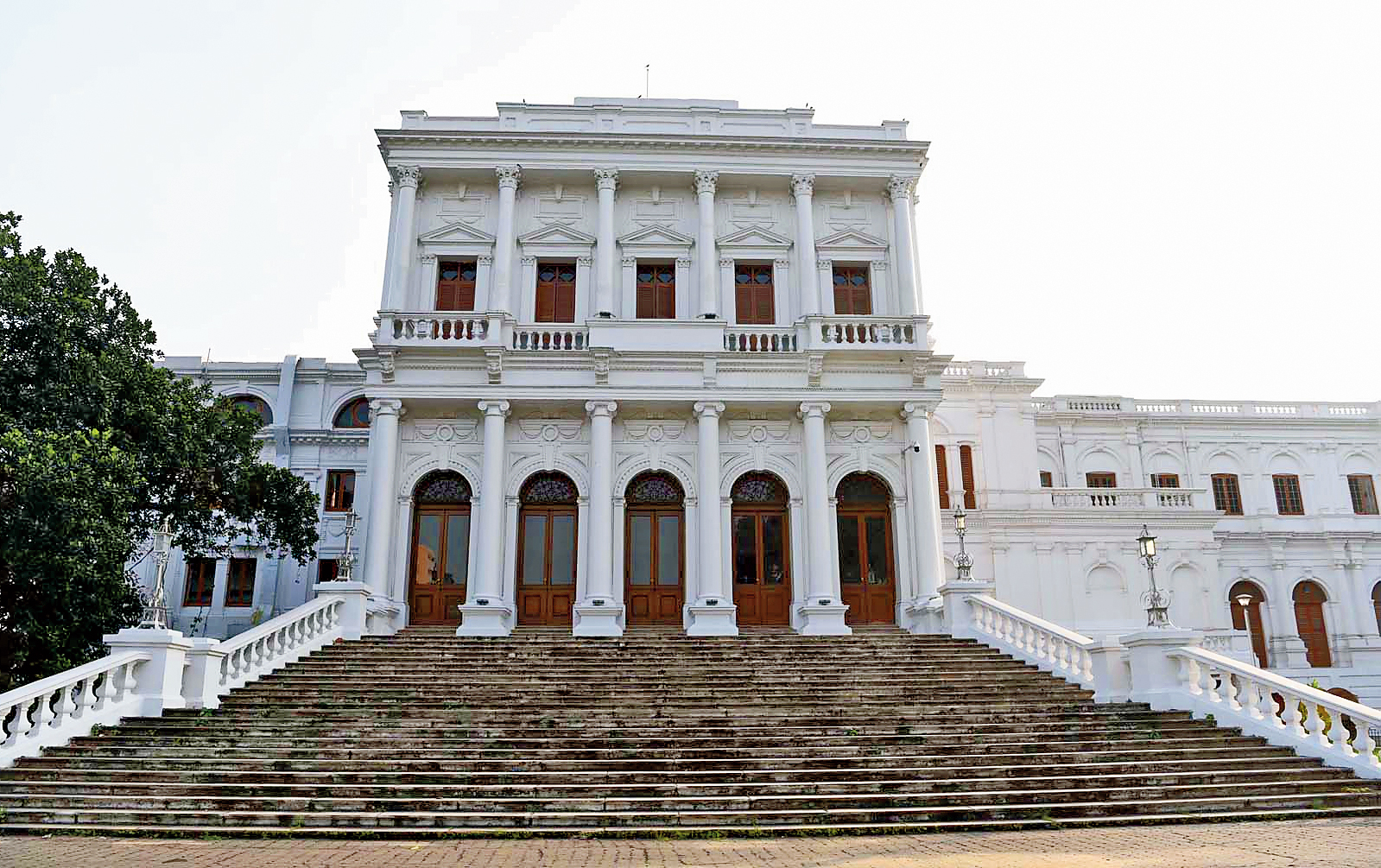 A frequent visitor to the library said the yellow-and-red anti-skid material had been there on the southern staircase of the Belvedere for at least six months.

But a section of conservation architects, who said the move to cover the staircase was against ethics of conservation, became aware of it after a group of men and women went there recently.

Mukul Agarwala, a founder of Calcutta Heritage Collective, took a picture and forwarded it to architect-friends of her. “I was shocked to see this. Is this allowed?” she asked.