If they were angling for gains, the move seems to have dismally backfired as Mamata Banerjee found support from the Congress and the CPM 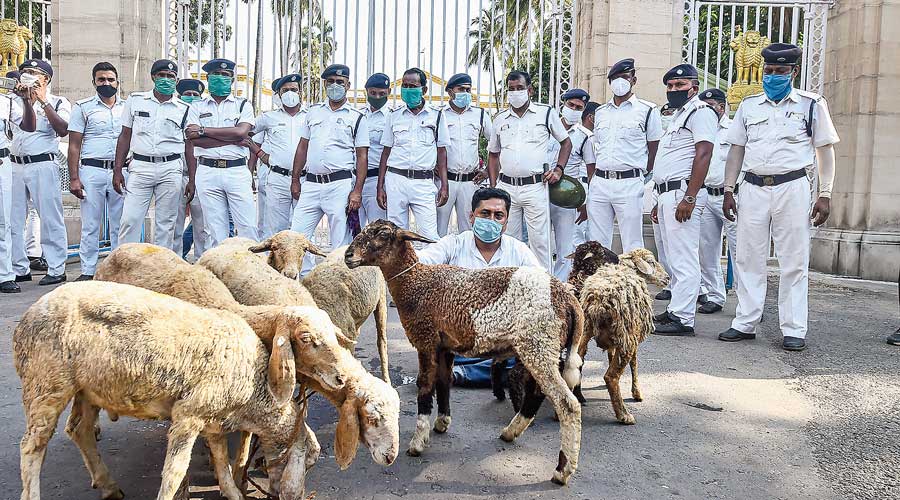 As the dust began to settle after the dizzying chain of events of Monday over the arrest of four senior politicians in the Narada sting case, its wider fallout appeared to be a bitterly critical majority view emerging over the role of the CBI and the saffron ecosystem allegedly behind it.

It remained unclear whether the CBI’s alleged masters were looking for political gains from sending it into selective hyperactivity over the Narada “sting” operation immediately after the historic mandate in favour of Mamata Banerjee or whether the arrests were an act of vendetta.

If they were angling for gains, the move seems to have dismally backfired as chief minister Mamata Banerjee found support from even some of her fiercest opponents, such as the Congress’s state chief Adhir Ranjan Chowdhury and CPM state secretary Surjya Kanta Mishra.

Support was palpable, on social media and elsewhere, even from sections of the civil society that remained avowedly against her in the Assembly election, widely regarded as a battle for Bengal’s soul.

“What I find immensely distasteful is the uncivil barbarity of the BJP, whose orders the CBI carries out, in trying to take it out on a handful of leaders — who may or may not be corrupt, it’s a different argument — of the principal political opponent, because it lost the election,” said a city-based filmmaker who remains unflinching in his support of the CPM and opposition to Trinamul Congress, but has been “sick” of the BJP’s bid, since May 2, to communalise and delegitimise the mega mandate.

“I am not a fan of her, or her politics. But she won fair and square. There’s no denying her that. But that’s exactly what the BJP now seems bent on doing… while sidestepping the people’s resounding, irrefutable verdict against it,” he added. “This is what we call in Bengali du-kan kata (appallingly shameless)… a phrase epitomised by a certain occupant of the Raj Bhavan, who wears his real status as a stooge of the BJP leadership as a badge of honour.”

The saffron camp — trounced 77:213, after two years of chest-thumping assertions of the “certainty” of a tally of 200-plus – has been going out of its way to play the victim card since the results here, while its government at the Centre has been relentless in trying to browbeat the newly-formed government of Mamata, in her third consecutive term as chief minister.

There have been hints, from sections within the BJP, that the outlandish demands from far-Right echo chambers for the use of Article 356 — in “Bengalistan” or “West Bangladesh” — were not being ruled out by the powers that be in Delhi. There have been early indications of the decks being cleared since the results, even before the CBI’s arrest — sanctioned by governor Jagdeep Dhankhar — of senior Trinamul leaders Subrata Mukherjee, Firhad Hakim, and Madan Mitra, besides former Trinamul leader Sovan Chatterjee, who quit the BJP just before the elections.

Several political scientists attributed most of it to the BJP’s alleged inability to digest the defeat, after having gone all out with polarisation and “thousands of crores” to win this unvanquished final frontier. They pointed out that little was done to these same leaders for five years, and the co-accused who joined the BJP — such as Suvendu Adhikari, Mukul Roy and Shanku Deb Panda — remained untouched.

“Most importantly, there is a certain ugliness to this (the CBI overdrive) happening during the peak of the second wave of the pandemic, allowed to assume apocalyptic proportions by Prime Minister Narendra Modi, his government, and his party,” said a city-based political scientist, requesting anonymity as he works for a central institution.

The saffron camp has also been going to town with the “collapse” of law and order angle — in consonance with its newfound telos of President’s rule — over Mamata’s visit to the Nizam Palace and the gathering of supporters outside it, which the CBI is trying to milk in its plea before the higher judiciary.

However, a Trinamul state vice-president said the events actually helped her further consolidate support, showing yet again how she stood by her own in the face of adversity.

“There may be more denial of bail. There could well be a transfer of the matter to another state. There could even be longer stints in prison for our colleagues. But this is easily shaping up to be our victory, eventually… more so, given the general lack of credibility of the CBI and all other agencies in the BJP regime,” he said.

Amid questions on what could have prompted the BJP to allegedly send the CBI on such an errand now, a senior Trinamul MP said desperation by the likes of Amit Shah to retain all 77 Assembly seats could be one.

“Since May 2, dozens of their MLAs and several Bengal MPs have been reaching out, exploring opportunities of abandoning their sinking ship. Over the past few days, backchannel parleys had been firming up to facilitate the defection of five-seven BJP MLAs,” said a Trinamul source.

“This could have been an attempt at scaring those trying to leave,” he added.

Trinamul spokesperson Sukhendu Sekhar Roy said most were veering around to the general view that the BJP is being a sore loser and trying to make governance difficult for Mamata, whom 47.94 per cent of the Bengal electorate picked to keep the Hindutva flagbearers out. Roy, a senior Rajya Sabha member, pointed out that in total, 61.87 per cent of Bengal’s votes were cast against the BJP this election.

“This goes to further show why this marauding hordes of Hindi-Hindu Hindustan were so decisively shunned by Bengal as the unwanted bohiragawto (outsider),” he said.